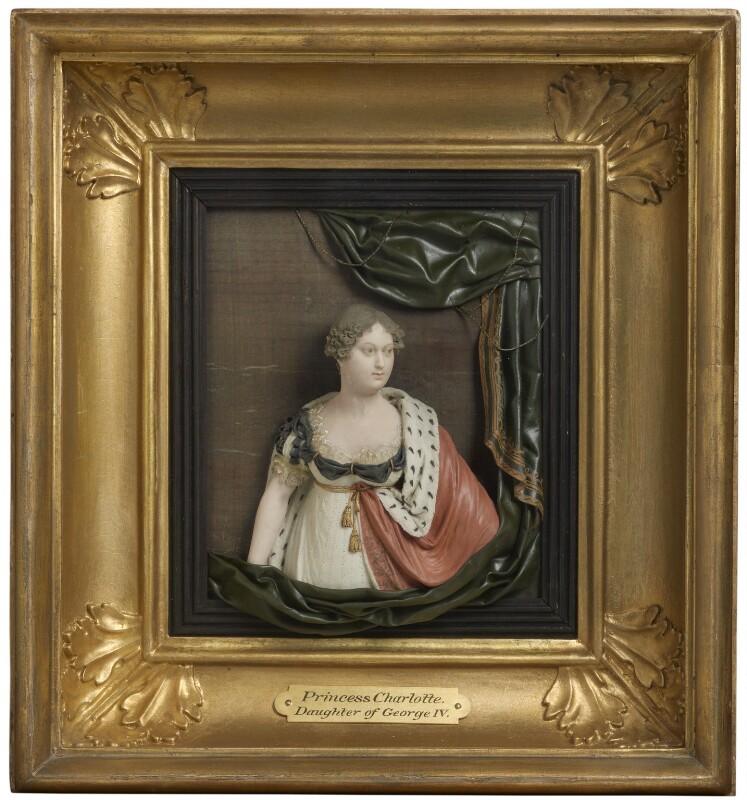 This is one of the first of a succession of wax busts and reliefs made by Percy shortly before his appointment as Wax Modeller to the Princess in 1817. A wax bust of Princess Charlotte, also dated 1814, was in the collection of the late HRH Princess Alice, Countess of Athlone, inherited from her father the Duke of Albany, exhibited 'Royal Gifts' at Christie's 1961-2 and sold Christie's 8 July 1981 (257). Later variants of the NPG relief are listed in E. J. Pyke's Dictionary of Wax Modellers, 1973, p 103; three-quarter-length copies with crimson instead of green curtains and dated 1817 are in Mr Pyke's own collection (reproduced Country Life, 22 March 1962, p 7659) and in the Royal Pavilion, Brighton; an undated copy is at Stanton Harcourt.

Half-length in crimson and ermine robe, white dress with dark green trimmings and lace bodice; brown hair parted in centre, curled at sides and braided at the back; dark green curtain edged with gold to right and lower front; dark green velvet background.

Thomas Kelly (publisher) 1821; thereafter uncertain until in the Arthur N. Gilbey collection and sold by his executors Christie's 26 April 1940 (142), bought Leggatt for the NPG.

Stipple vignette by R. Cooper, with slight differences in the dress, was published April 1821 by T. Kelly 'from Mr Percy's highly esteemed Wax Model in the Possession of the Publisher'.