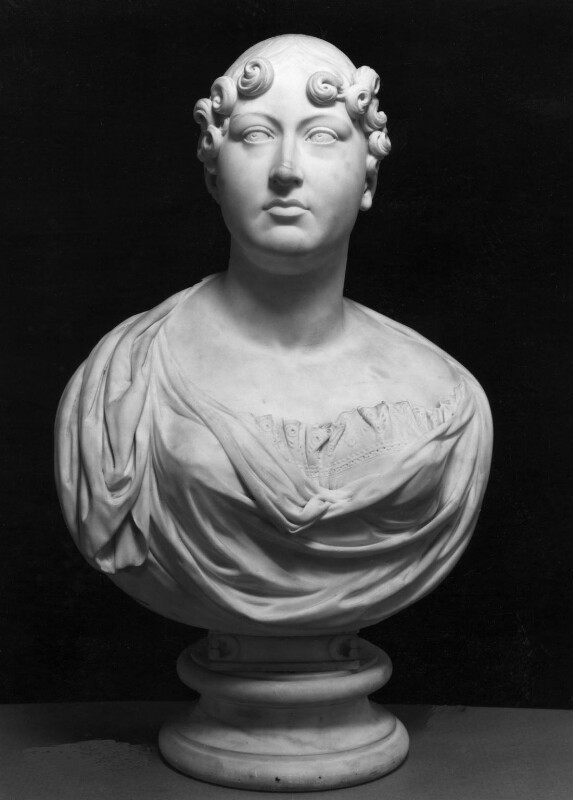 Turnerelli had exhibited a bust of the Princess as a child RA 1802 (1084), now at Windsor Castle; a black terracotta version is in the Dynastic Museum, Brussels, exhibited 'The Lion and the Unicorn' NPG 1966. He became Sculptor in Ordinary to the Queen and the Royal Family in 1801 and thereafter taught sculpture to Princess Caroline (John Gilmartin, 'Peter Turnerelli' in Irish Georgian Society Quarterly Bulletin, X, 1967, pp 3-19).
On Princess Charlotte's wedding morning she had a two hour sitting for 'the nuptial bust' (Robert Huish, Memoirs of HRH Charlotte Princess of Wales, 1818, p 266), and when the NPG was first offered the bust in 1910 it was accompanied by a letter from Turnerelli's son confirming that this was indeed according to family tradition 'the nuptial bust'. The 1906 sale catalogue of the Rev D. S. Spedding's collection described the lot as '… the original marble nuptial bust, life size, of the Princess Charlotte … The last sitting for this fine work of art was given to Turnerelli by Princess Charlotte on the day of her Marriage'.
Versions are in the Royal Collection, Windsor Castle, and at Christie's 29 April 1980 (60), both dated 1817. A slightly different type, with hair piled on top of her head, was offered to the NPG in 1861 (Sir George Scharf’s Trustees’ Sketchbooks, V, 78). Drawing, watercolour and enamel miniatures by Grimaldi 'after Turnerelli' are listed in Rev Alexander Grimaldi, A Catalogue of Paintings, Drawings & Engravings by and after William Grimaldi, 1873. An impression from a medal die by T. Wyon from Turnerelli's bust was exhibited RA 1818 (977).

Head and shoulders in a lace-trimmed dress, hair braided at the back and in ringlets on sides and forehead; lobe of her right ear is broken.