5 of 49 portraits of Princess Charlotte Augusta of Wales 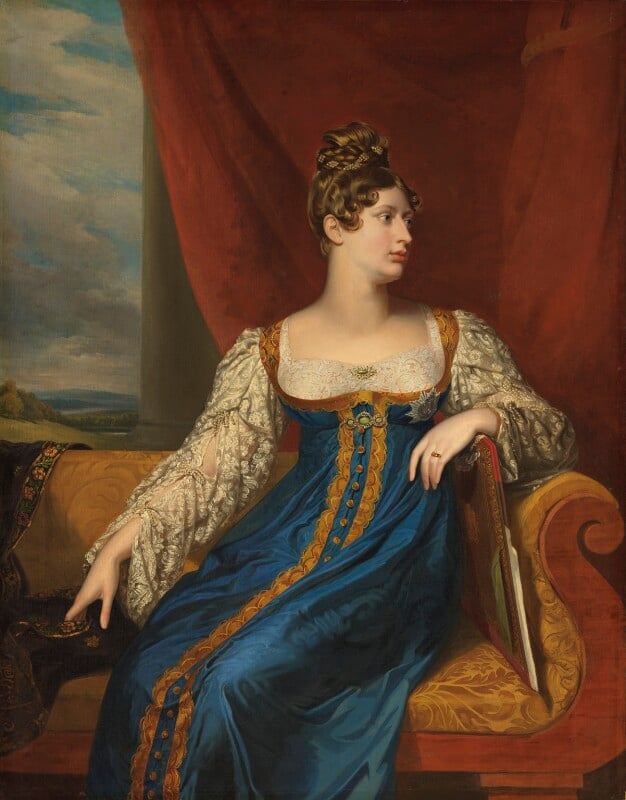 Several variations and copies exist (Sir Oliver Millar, The Later Georgian Pictures in the Collection of Her Majesty The Queen, 1969, 740, 751-3); the full-sized whole-length in the Belgian Embassy London is in reverse to the NPG one and has roses in the hair. According to a letter from Colnaghi, 10 July 1858 in the NPG archive, 'this Picture is the first one painted from the life, and remained in the Painter's possession until his death. Mr Dawe leaving it to his sister, the picture now belongs to her son'. Two pictures by Dawe were exhibited RA 1817 and 1818 but these are more likely to have been Prince Leopold's version (with roses in the hair) and the Belgian Royal family version whole-length (walking on a terrace); a miniature copy by Jeremiah Steele is in the Prince of Hanover's collection (Calenberg).
Dawe had been 'honoured with the constant and liberal patronage of the royal couple' soon after their marriage in 1816 and his products were hung at Claremont, but Leopold preferred George Sanders's portrait of Princess Charlotte 'which is more Lady like than Mr Daw's coarse paintings'. Certainly the NPG type with its more restrained hair-style is less vulgar than the others which Dawe seems to have preferred for the mezzotints. Even from an early age the Princess had a liking for extravagant hair-styles, deplored by Lady Charlotte Bury in 1813 - '... looking handsome, very pale, but her head more becomingly dressed, that is to say, less dressed than usual' (Diary of a Lady-in-Waiting, 24 January 1813).
The portfolio under her wrist presumably contains etchings, a medium in which the Princess was a skilful practitioner. The blue dress, probably Russian fancy dress, is in the Museum of London, presented by George V in 1927; the blue is lighter than in the portrait and none of the lace has survived.

The artist then to his nephew from whom bought through Colnaghi in 1858.

A mezzotint of a head and shoulders version with roses in her hair and a different chemise was engraved by Say and published 1 December 1817; it belonged to Prince Leopold and other whole-length mezzotints of it are by Henry Dawe and T. Hodgetts 12 January 1818, and by S. W. Reynolds 13 March 1818; the original of these is in the Belgian Royal Collection on loan to the Belgian Embassy in London where it has been since the house was occupied by her aunt the Duchess of Kent. A watercolour drawing of the head, close to Say's mezzotint, is at Windsor Castle (2481).