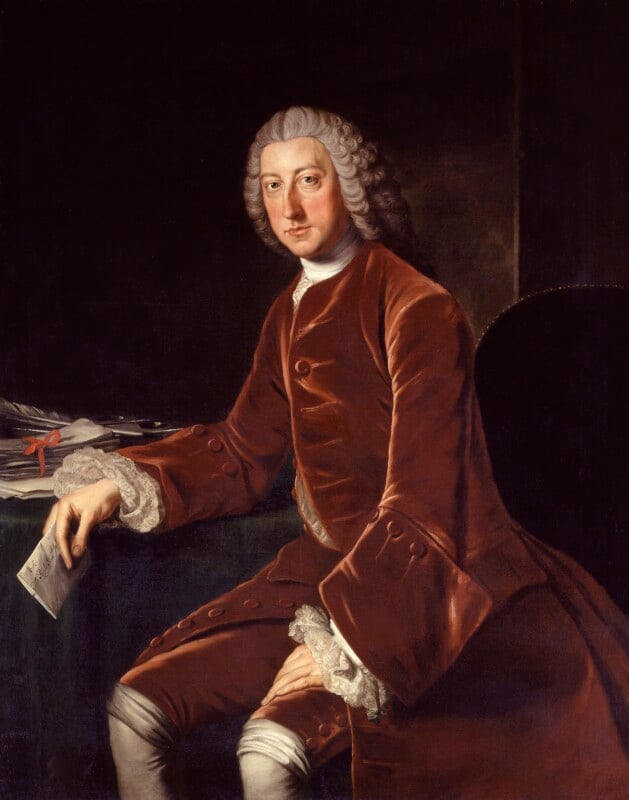 A popular portrait apparently repeated several times by the artist, no doubt with studio assistance. No known version seems to allow for the sitter's advancing age, nor is any clearly pre-eminent in quality. Letters dated from Bath 8 April and 3 May 1754 to Richard, 2nd Earl Temple, [1] imply that Chatham sat to Hoare in that year: 'I have reconsidered Mr Hoare's labours of yesterday', he writes on 3 May, 'and I find it the very best thing he has yet done, in point of likeness.' This does not necessarily mean a portrait of Chatham himself, but, on the other hand, the date would coincide with his engagement and a possible commission for his future brother-in-law - Chatham married Temple's sister Hester Grenville [2] on 15 November. The Temple picture, sold from Stowe in 1848 [3] and now in the Carnegie Institute, Pittsburgh, is inscribed top right with the sitter's name and a date which has been read as 1756, but may be 1754. R. Houston's half-length mezzotint published in 1766 ... from an Original Picture in the Possession of Earl Temple, with Chatham in a flowered damask coat and the stoop less pronounced, does not correspond with the Pittsburgh oil. This might argue the existence of another portrait now lost. Chaloner Smith treats the engraving (J. Chaloner Smith, British Mezzotinto Portraits, 1878-83, 94) as after Hoare; the type is very close but no artist's name is mentioned.
Further versions of NPG 1050, the first six, three-quarter length, are: (1) a portrait in the collection of the late Sir Edward O'Bryen Hoare, 7th Bart which, after cleaning in 1971, proved to be better than NPG 1050 and nearer the pattern, see (8); presumably retained by the sitter and descended through the 2nd Earl of Chatham (dsp 1835) to Major William Stanhope Taylor who married, 1824, Lady Sarah O'Brien, daughter of the 2nd Marquess of Thomond, great-grandfather of Sir Edward; (2) North Carolina Museum of Art, from the collection of William Pitt the younger's tutor, George Pretyman Tomline (1750-1827) of Orwell Park, with Colnaghi’s 1937; (3) private collection, with Spink 1947, [4] from the Rosebery sale, Christie's, 5 May 1939, lot 58; (4) Duke of Buccleuch, Drumlanrig; (5) Toronto, private collection, 1936; (6) signed and dated 1771, with the 4th Earl of Bristol presenting Lord Hervey, as a midshipman, to Chatham, [5] sold with a number of Bristol family portraits, Christie's, 16 June 1950, lot 149 'Property of a Lady'; (7) signed half length without hands, the Department of the Environment; [6] (8) head, in chalks, inscribed Wm Hoare/delt., collection Nina, Lady Hoare, possibly a studio pattern drawing - a drawing in chalks 'manifestly like' was seen by Farington in the house of Prince Hoare, the artist's son, 1809; [7] (9) a similar oil at Hagley. [8]
The fine whole length in peer's parliamentary robes presented to the City of Bath, 1766, [9] was probably the result of second sittings at their behest. At Burton Pynsent, [10] according to correspondence descended to Sir Timothy Hoare, Bart, a similar portrait is known to have been severely damaged by damp. A replacement, referred to in the letters as taken from the 1765 (sic) portrait and painted in 1772, was at Sotheby's, 24 November 1965, with a companion whole length of Lady Chatham, lots 82 and 83, from the collection of the Hon. Mrs Sedley Barnes, the purchaser at the Butleigh Court sale. Presented to Lord Glastonbury by the 2nd Earl of Chatham, they are of disappointing quality. [11] ‘Signatures' added about 1910 by A. Jones of Bath were removed c.1972. The pictures now belong to the Department of the Environment (Home Office).

A retouching extends along his right nostril, across the edge of his right cheek and into the background; cleaned and restored 1896 and 1970.

The type engraved by Richard Houston (J. Chaloner Smith, British Mezzotinto Portraits, 1878-83, 92) apparently before December 1756, since the second state is lettered One of His Majesty's Principal Secretaries of State - an office the sitter held from December 1756 to April 1757, and from June 1757 to 1761. William Holl's engraving for Lodge's Portraits, 1832 (IV, 210), includes the sitter's name in the inscription on a letter. For numerous other engravings see F. O'Donoghue and Sir Henry M. Hake, Catalogue of Engraved British Portraits ... in the British Museum, 1908-25.