4 of 14 portraits by George Chinnery 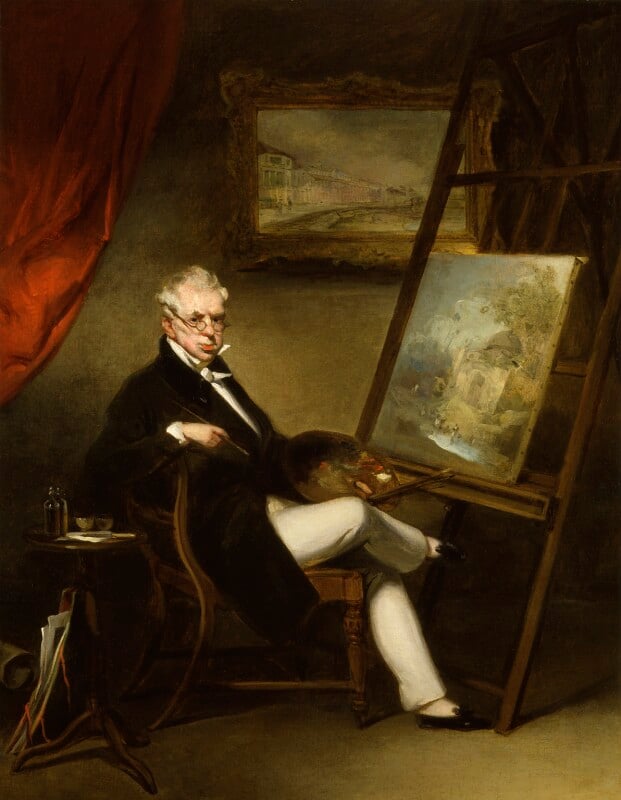 The most famous of all Chinnery's self-portraits. He is shown in his studio in Macao, with a canvas representing an Indian mosque on the easel, and a picture of the Praya Grande, Macao, on the wall behind. A squared-off pen and ink study for the whole composition is in the National Gallery of Ireland, Dublin, and related studies of the head are in the Victoria and Albert Museum (2), and the collection of J. Braga. The NPG portrait was the last painting which Chinnery sent to the RA, where one reviewer, reiterating a perennial criticism of his work, 'wished the extremities had not been so much neglected' (Art-Union, p 180). The portrait was consigned to London through the artist's friend, Lancelot Dent, a well-known merchant. Chinnery wrote to him in a letter of 29 August 1845 (NPG archives):

'I have the pleasure to put my own portrait in charge of Mr Duncan, who will kindly deliver it to you. I believe I mentioned to you my particular wish that it should not be engraved during my Life Time - but after my Death I can have no objection - I have put within the Case my written Directions as to its being varnished. I now send a Certificate wh. will save you some trouble I believe at the Custom House in London.'
It is not known whether Dent was given the portrait by Chinnery himself, or whether he bought it at the sale of Chinnery's effects in Macao after the latter's death in 1852. It has generally been presumed that this portrait was painted shortly before its first exhibition in 1846. A comparison with other self-portraits suggests that it may date from a few years earlier.

The artist; Lancelot Dent; by descent to his nephew, John Dent, and presented by him, on his uncle's behalf, 1888.