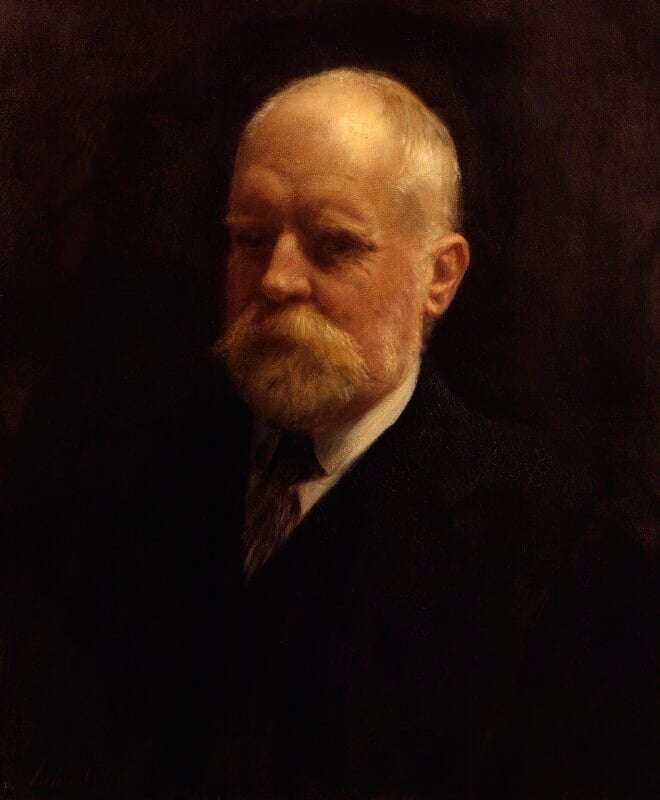 John Collier was the only artist Valentine Chirol sat to and two paintings were produced in 1909. The main image was a three-quarter length (see ‘All known portraits’) and the other, NPG 4271, an apparently unrelated head and shoulders. There is no documentation regarding the sittings, nor evidence that artist and sitter were previously acquainted. But to sit to Collier – an establishment artist and author of books on painting – needed no justification for one of Chirol’s generation. Collier’s style, his ‘insistence on extreme accuracy, as distinct from a generalised truth’,[1] no doubt appealed to Chirol’s sense of the precise.

Collier’s Sitter Book reveals a busy practice dominated by portraiture, of both men and women, living and posthumous; nor was he above producing replicas.[2] In his treatise The Art of Portrait Painting (1905) Collier recommended top lighting for studio portraits:

There is no doubt that a light more from the top than is to be found in most rooms is not only a becoming light which defines the features pleasantly without distorting them, but is also very convenient to work by, for with a high light the canvas can be turned in various positions without getting a shine on it. Also this light fatigues the eyes of the sitters less: they can look in its direction but somewhat under it without being dazzled, as they would be if they looked towards the window in an ordinary room.[3]

A feature of the portrait of Chirol is the white light hitting the upper temple, and the enigmatic expression from under the brows. This device of strong light from the top right is found in several other Collier portraits at the NPG.[4]

In 1909 Chirol was in his mid-fifties and beginning to slow down. He had enemies in The Times office and his health, never robust, was worn out by years of heading the Foreign Desk.[5] ‘Chirol’s vivid imagination acted so violently and painfully on his sensitive nerves that he came to fear sleep. He was, in fact, made for another sort of career than journalism and another sort of office than a newspaper’s.… As he grew older he became more sensitive, more introspective and more inclined to self-pity.’[6] Nevertheless, Chirol stayed in post until 1912, and at the time of sitting to Collier he was also writing a book on Indian politics, Indian Unrest (1910).

One who remained a supporter throughout the period was Charles Frederic Moberly Bell, the managing director of The Times. From c.1920 Chirol acted as founding governor of Lady Margaret School in Fulham, which had been rescued and directed by Moberly Bell’s daughter Enid, and he lived a few doors away from the Bell household in Carlyle Square in Chelsea.

In his will, Chirol bequeathed the larger Collier portrait to the National Portrait Gallery but in 1930 the Gallery’s Trustees did not feel there were enough grounds to overturn the Ten-Year Rule, and the bequest was declined. The portrait was offered instead to Lady Margaret School, where it hangs today. There was no image of Valentine Chirol at the NPG until 1962 when Collier’s son Sir Laurence Collier offered the bust-length version in an ebonized frame.[7] This time the Trustees accepted the portrait very gratefully.[8]