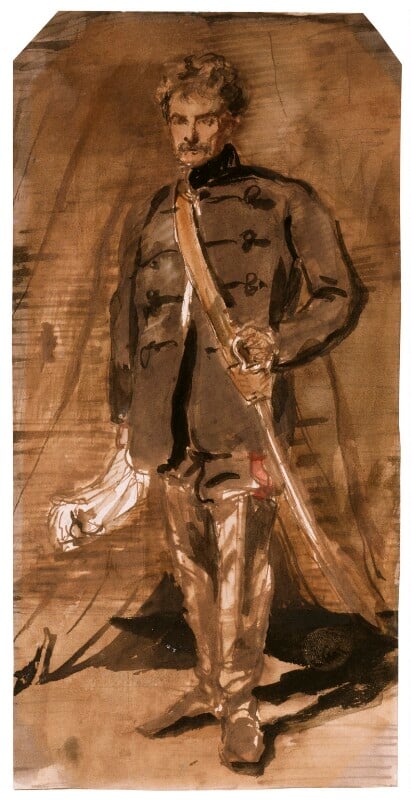 This is a sketch after Grant's painting of Clyde (in the uniform he wore in India [1]), commissioned by Earl Canning, listed in Grant's 'Sitters Book' (copy of original MS, NPG archives), under the year 1860, exhibited RA, 1861 (131), and SKM, 1868 (454), engraved by S. Cousins, published H. Graves (example in NPG). According to information on the mount, the NPG drawing was executed at Viscount Hardinge's home, South Park, from the artist's recollection of the large picture. The sketch is almost identical with the finished painting except for differences in the pose of the arms. Grant, who was an old friend of the family, gave Hardinge the sketch after finishing it. A copy of the finished painting by F. Graves is at Apsley House, London. A slightly different version, attributed to Grant, was in the collection of J. McClellon, Winnipeg, 1928. Viscount Hardinge was appointed a trustee of the NPG in 1868, and chairman in 1876.

1) Clyde is wearing a non-regulation undress garment, later called a patrol jacket. He is wearing trousers, tucked into his cavalry boots, 'Napoleons', and his head-dress appears to be a low shako, or kepi shape with a white sun-cover, also incorporating a neck-curtain. His sword is a light cavalry sabre of the old pattern. The tent in the background indicates that he was on service. This information was kindly communicated by the National Army Museum, Camberley.

Viscount Hardinge, presented by him, 1881.