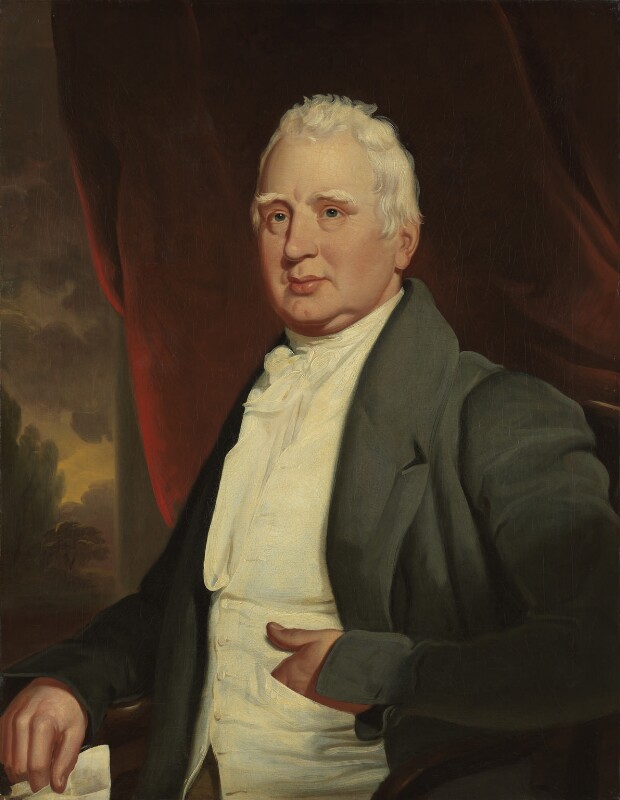 The artist is unknown though a visitor, Mr E. Kersley, has suggested the name Matthews of Manchester (or Birmingham) on the grounds of comparison with a similar portrait of Cobbett's son holding Cobbett's Letter to a Young Man (note in NPG archive). A more likely possibility is that it was a sketch by the engraver George Cooke and worked into the large lithograph by N. Maurin. A copy of this lithograph, given by Miss Eleanor Cobbett to J. S. Thornton and by him to the NPG in 1895, bears a facsimile inscription in Cobbett's handwriting relating to the trial for incitement to sedition, and beginning: 'This portrait represents me in the dress I wore at the memorable trial, before the Lord Chief Justice Tenterden and a special Jury, in the Guildhall of the City of London on the 7 July 1831 ...' and signed 'Wm Cobbett, Kensington, 20 July 1831'. George Cooke was a prolific and meticulous engraver but portraits in oil by him are not known; this rather amateurish work may conceivably be his. Another oil version offered to the NPG in 1878 was inscribed on the letter in his right hand: yr ob. St. Sam Chinn (see sketch by Scharf in Sir George Scharf’s Trustees’ Sketchbooks, XXVI, 11). A modern copy by Brenda Morgan is in the National Liberal Club.

Related and possibly the original of a large lithograph by Maurin from a picture by G. Cooke; a half-length vignette was used as frontispiece to Robert Huish, Memoir of the late William Cobbett, 1835, vol.II; a modern woodcut by John Farleigh was used as frontispiece to Reitzel's edition, 1933, of The Progress of a Plough-boy to a Seat in Parliament.