3 of 6 portraits of John Constable 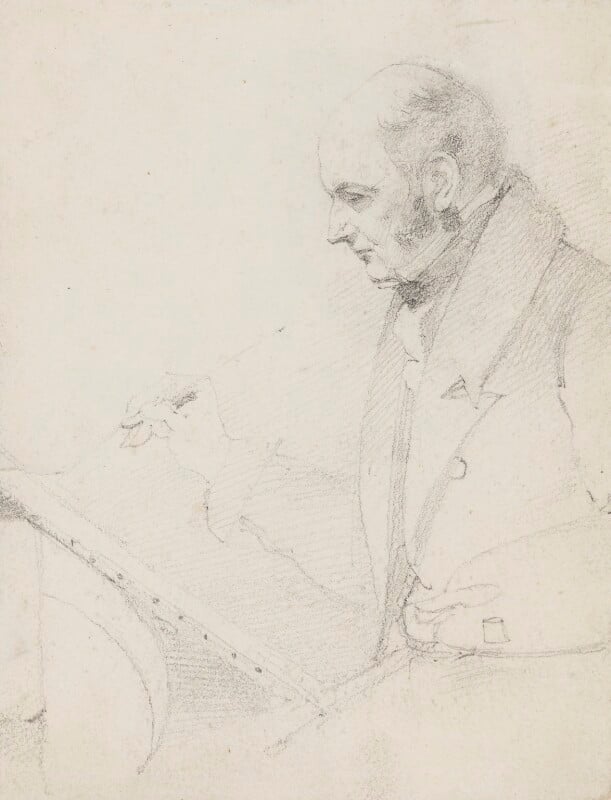 A paper formerly on the backboard and now in NPG archive reads: This little portrait sketch of John Constable RA was taken at the Royal Academy by Daniel Maclise RA. He sent it to C. R. Leslie RA who gave it to me. It is described on page 287 of the small edition of C. R. Leslie's Memoirs of J. C. I. C.

While gathering material for his Life of Constable Leslie wrote to Maclise some time before 1843 'to ask if he could help me to anything more, and that gentleman very kindly sent me the following note, enclosing a pencil sketch he had made of Constable in the Academy':

14 Russell Place. My dear Sir. I cannot call to mind the substance of any particular address of Constable when he was visitor, but I recollect that he constantly addressed us collectively; or rather, whatever observation he had to make, he made aloud; and this was very frequent. Every evening he said something, generally relating to the model he had set, and in favour of certain picturesque accompaniments which he thought might always be introduced with propriety; he was, with the students, a most popular visitor. The little sketch was made under the disadvantage of my being on the upper and back seat, looking down on him as he sat on the front and lower one in the Life School, and must have been when he set the Eve, although I should not have thought it was so long ago as 1830.
The drawing's authenticity has been questioned by Mayne (C. R. Leslie, Memoirs of … John Constable, 1843 ed. J. H. Mayne 1951, p 405) on the grounds of its descent through the Constable rather than the Leslie family. Paris & Fleming-Williams (Leslie Parris and Ian Fleming-Williams, Constable, Catalogue of Centenary Exhibition, Tate Gallery, 1976, p 165) also say 'it does not really correspond with Maclise's description of the sketch he sent to Leslie. It appears to have been drawn from close to and on the same level as the sitter, rather than from some distance above'. Both these criticisms seem rather too fastidious in view of the paper on the backboard transcribed above. Ormond describes it as 'carefully composed, in spite of its apparent casualness, and crisply handled' (Richard Ormond, Daniel Maclise 1866-1870, 1972, p 33).

Half-length profile to left with palette and canvas.