4 of 8 portraits by (Edward) Onslow Ford 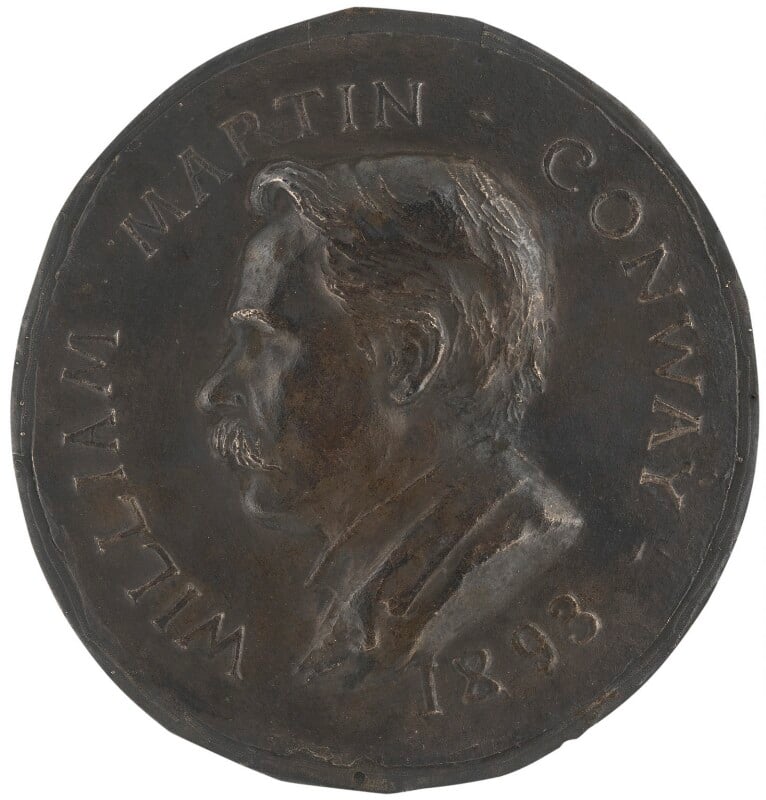 This small uniface medallion is something of a mystery, as the circumstances of its execution remain obscure. In 1893 Conway had returned from his first major expedition, exploring the Karakoram Himalayas, which set an altitude record by reaching the summit of Pioneer Peak (6890m). He had resigned his academic position at Liverpool and spent most of the decade on travels and exploration.

In 1893 Edward Onslow Ford was at a high point in his career, following the appearance of his acclaimed memorial to Percy Bysshe Shelley at the 1892 Royal Academy Summer Exhibition. Five major portrait busts by him are in the National Portrait Gallery collection, including those of John Everett Millais (NPG 1329a) and Hubert von Herkomer (NPG 6196. Ford is not known for medals but in 1893 was invited to submit designs for a new coinage series, and it may be that some of his untraced works were in this format.

As far as can be ascertained, sculptor and sitter first met around 1888, when Conway organized the first congress of the National Association for the Advancement of Art, held in Liverpool in December 1888. Enlisting Frederic Leighton as a reluctant president, Conway garnered support from other prominent artists and an inaugural meeting was held in London. According to Conway:

The Congress was divided into sections for Painting ([Lawrence Alma-]Tadema president), Sculpture (Alfred Gilbert president), Architecture (Professor [George] Aitchison R.A. president), Decorative Arts (Walter Crane) and Public Art.[1] When it met it was attended by about a thousand members. The President’s address was not enthusiastic, but it served. The Section Meetings gave rise to hot debates, especially in the Sculpture Section, where Alfred Gilbert was supported by Onslow Ford, Stirling Lee, Symonds, J.M. Swan and others.[2]

After its third congress in Birmingham the National Association folded when Conway resumed mountaineering.

According to his biographer, Conway returned from his Himalaya expedition determined to acquire fame and fortune. ‘He lectured all over England; he was interviewed in the evening papers; he dined out on his reputation as a good talker about his travels … he gave smoking parties for his men friends.’[3] He also dined regularly with George Scharf, perhaps in relation to his ambition to succeed Frederic William Burton as keeper of the National Gallery. He lectured at the Royal Institution, became editor of the Alpine Journal and approached the Liberal Party for a safe seat in Parliament. He wrote:

I am tired of sitting in a study and writing historical books, and my wife’s uncertain health makes it impossible for me to continue to prosecute an exploration in out-of-the-way parts of the world, which is the only form of active life that seems to me worth while, outside of politics. A good active fighting existence can only be coupled (as far as I can see) with home-life in the form of politics.[4]

He was selected as candidate for Bath, but failed to be elected. At the same time he lobbied for the Slade Chair of Fine Art at Cambridge University, soliciting testimonials from artists (canvassed by Onslow Ford and Stirling Lee), from art historians (canvassed by Sidney Colvin), from supporters in Liverpool and from foreign scholars of Flemish art, but failed in this first attempt. Ford’s involvement in the Slade application suggests that the medallion was intended to contribute to Conway’s establishment in public life. It was possibly executed also as retrospective thanks for Conway’s defence of sculptural freedom through the National Association’s 1888 meeting.

The medallion, of which this appears the sole example, was presumably modelled in wax, moulded in another medium such as plaster, resin or gelatine, and electrotyped to produce a copper object which was then silvered. It is probable that the intermediate moulding process was carried out by Fernando Meacci, piece-moulder and figure-maker, who until his death in September 1893 undertook a great variety of work for Ford.[5] Meacci's account book records a visit to Ford's studio in St John's Wood on 16 February 1893 when he waste-moulded, cast and chipped out '2 medallions & a little Figure'.[6] For electrotyping, the foremost company at this date was Elkington & Co. in Birmingham, but this piece has such rough, irregular features – suggestive of hand production – that it was probably created by a less commercial operation.

Stylistically it shares the free modelling common to the ‘New Sculpture’ movement of 1880–1910, together with the circumambient lettering in emulation of early Italian portrait medals. Both head and lettering can be compared with Alphonse Legros’s acclaimed medal of Charles Darwin produced in 1881,[7] and Cecil Browne’s cast copper medal of the connoisseur Murray Marks.[8]

The only contemporary reference to the medallion found to date is a sonnet by an unidentified author quoted at a meeting of the Alpine Club on 6 February 1917 and printed in its Proceedings. According to this, the sonnet was inserted in an ‘old hotel-book’ and ‘dated evidently from the time when [Conway] was president of the Club’. It reads:

When I behold this rampant crest of hair,
This youthful mien, so blandly resolute,
I feel the captious critic must be mute
Before a Knight and President so rare.
Great End-to-Ender, climber past compare,
A rolling-stone, on which not moss takes root
But trees of knowledge, bearing golden fruit
That puffing publishers make haste to share.
One year we watch with wonder, while you stroll
Planetabling [sic] on some peak of Himalay;
The next, we find you rambling at the Pole,
Andes, Spitsbergen: where are you today?
At home, or off on some new Expedition,
Professor, critic, climber, politician.[9]


In 1925, Conway gave the medal for safe-keeping to Charles John ffoulkes, secretary of the Imperial War Museum (of which Conway was then honorary director). Ffoulkes passed it to the NPG, with the request that it be placed in store ‘and when the time comes to consider the inclusion of Sir Martin Conway in your collection (I trust many years hence) will you offer it with my humble respects to the Board’.[10] The proposed destination was no doubt thanks to Conway’s position since 1922 as a Trustee of the NPG. By then ennobled, Conway died in 1937 and became eligible for inclusion in the collection ten years later; formal accession of the work took place in 1957.

The sitter, by whom given to Charles John ffoulkes, director of the Imperial War Museum, in 1925 and by him in the same year passed to NPG where formally accessioned in 1957.