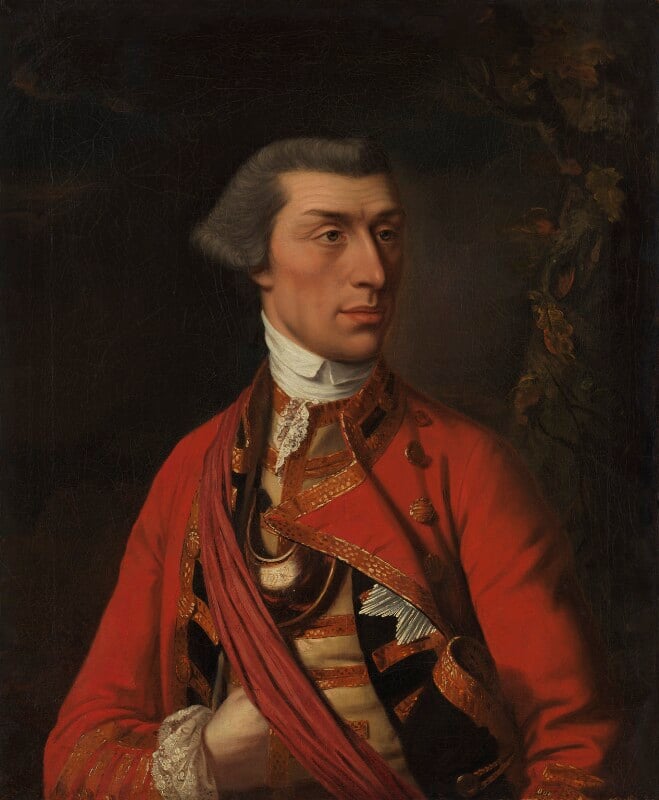 NPG 124 is one of several versions of the portrait by Henry Morland, showing Coote as colonel of the 84th Foot, a rank he held from 1759-63, [1] indicating a date soon after his triumphal return to England late in 1762. The star of the Bath, which he received in 1771, was evidently added.
Morland’s authorship is confirmed by Philip Dawe’s mezzotint published in July 1782 (H. Morland pinxit), which shows a similar but oval image, differing in the omission of the right hand and hat, the replacement of the officer’s sash with the Bath ribbon beneath his coat, the suggestion of greyer hair, and an open sky background. The publication of this print coincided with the exhibition of a portrait of General Sir Eyre Coote by Morland at the Society of Artists in 1782, no.26. The publication by James Walker in 1783 of a second related (reversed) bust-length engraving, made From a Painting in the possession of G. Hesse Esqr (and without the Bath insignia), suggests that Morland’s 1782 exhibit was of the 1763 pattern, doubtless brought out (with the Bath insignia added) to mark Coote’s military successes against Hyder Ali the previous year. [2]
Other versions are in the National Army Museum (7112-49) and in an Irish private collection. [3] Another, a painted oval, omitting the right hand and without the star of the Bath, was sold Christie’s, New York, 8 November 1985, lot 96; this, or another, belonged to family descendants in 1968. [4]

Grey eyes, grey powdered hair, wearing a gilded silver gorget engraved with the crown and cypher of George III,1 and the uniform of a colonel of the 84th Foot2 - red coat with black facings and gold trim, buff waistcoat with gold trim, black hat with gold trim under his arm; pink officer’s sash over his coat which bears the star of the Bath (evidently added and conveniently half-hidden by the lappet of the coat collar).