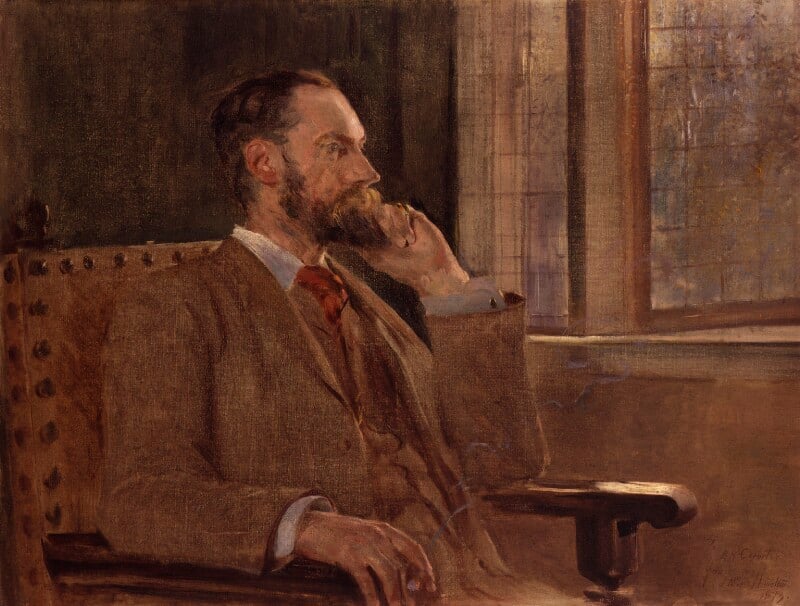 This is one of four portraits by John McLure Hamilton given by him to the Gallery in 1920; see also (Edward) Onslow Ford (NPG 1866), Alfred Gilbert (NPG 1865) and William Cosmo Monkhouse (NPG 1868). Writing at the time of acquisition, Hamilton recalled that all the sitters ‘were at one time my intimate friends’ , closely associated throughout their careers. Their friendship was an unusual example, he wrote, of ‘the advantages of long association and mutual helpfulness’. [1]

Sitter and artist probably met soon after 1878 when American-born Hamilton settled in London; during the following decade they were studio neighbours in The Avenue, Fulham Road. Hamilton’s volume of brief memoirs includes notes on Ford, Gilbert, Monkhouse and forty-two other portrait sitters, but does not mention Corbet. [2]

The present work deploys Hamilton’s favoured half-length horizontal format, showing the sitter seated and in profile, as in NPG 1866 and the two additional portraits by Hamilton in the Collection, of John Tyndall (NPG 1287) and Herbert Spencer (NPG 4092). The petroleum oil paint is very thinly applied, on what appears a lightly primed support, resulting in a flat, matt appearance with subdued tones blending together. Seeing photographs of the four small works, the artist later exclaimed, ‘How modest they are!’ [3] Citing Hubert von Herkomer’s observation that the portraits had ‘a gray tone and quality that distinguish them from others’, he added his view that ‘the medium that I always use, petroleum, has something to do with this as well as my natural inclination to see things gray’ [4] . In addition, the works had ‘never been varnished & should not be unless absolutely necessary’ but would look better under glass ‘as that acts as a sort of varnish’. [5]

The present frame dates from 1920. With the other three portraits, NPG 1867 came to the Gallery unframed because the original frames had allegedly become too battered through exhibition in ‘Europe, America, and England’. [6] However, the only exhibition record found for the present work is the 1893 Royal Society of Portrait Painters exhibition.

Sitter, then artist, by whom presented 1920.