1 of 7 portraits of William Cowper 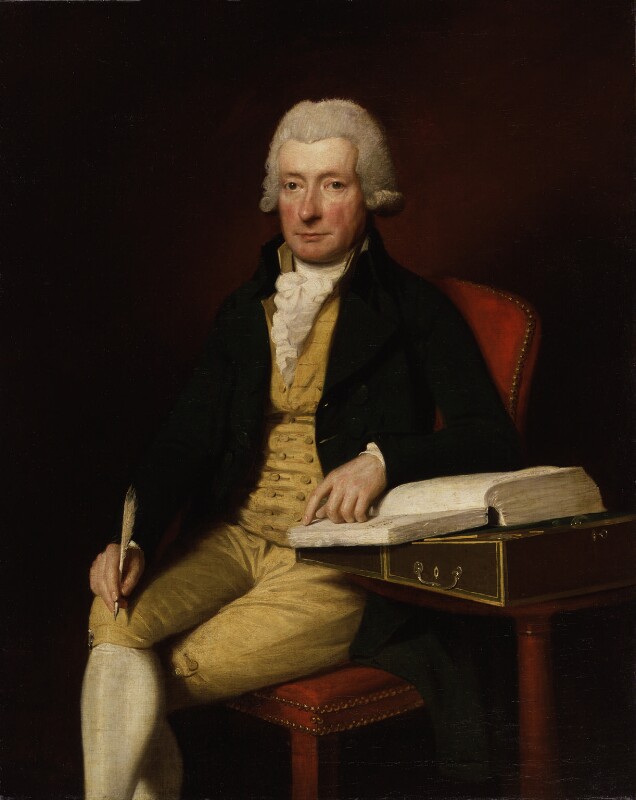 Original canvas inscribed verso: The/Author of the Task &c./in the sixty first year of his age/represented with astonishing like ness by/Lemuel Francis Abbott/who painted this portrait in the month of July/1792/at Weston Underwood in Buckinghamshire/according to the engagement of it’s highly gratified possessor/John Johnson.
Canvas stamp, visible before relining: T Poole/High Holborn/London; and 856 [143 145].

NPG 2783 was commissioned for the poet’s cousin, Mrs Anne Bodham, by her nephew John Johnson, who had apparently first attempted to employ Thomas Lawrence. [1] Abbott, whom Cowper found ‘a sober, quiet man’, [2] painted him wearing the ‘Green and buff ... colours in which I am oftener seen than in any others, and are become almost as natural to me as a parrot, and the dress was chosen indeed principally for that reason’; [3] on his desk (given him by his cousin Theadora Cowper), [4] Abbott painted the bound manuscript of Homer’s Iliad (referring to Cowper’s continuing revision of his translation published in 1791). [5]
The progress of the portrait is well documented in Cowper’s letters. Abbott came up from London to Weston Underwood, where Cowper was living with the invalid Mrs Unwin, arriving on 12 July 1792. [6] ‘You never heard of him, you say. It is very likely, but there is nevertheless such a painter and an excellent one he is’. [7] Three days later Cowper quipped ‘Abbot is painting me so true,/That (trust me) you would stare,/And hardly know, at the first view,/If I were here, or there’; [8] after six days he was complaining that his ‘whole time’ was ‘engaged to the Painter’, [9] then on 21 July he announced that ‘Tomorrow will be my last sitting’; [10] he had ‘been sitting these ten days’ and he was ‘heartily glad that my sitting time is over’. [11] Abbott was to complete the portrait on 23 July and depart on 25 July.[12]
It was much admired within the poet’s circle. For Cowper himself the likeness was ‘the closest imaginable’ and he thought it would give ‘as much pleasure, nay perhaps, even more, than a sight of the Original’. [13] Johnson, who had commissioned it, had already said on 19 July that it was ‘a most enchanting likeness’, and that friends were ‘crazy to have prints of it’; [14] the inscription on the verso of NPG 2783 provides further evidence of his pleasure. Finally on 29 July Cowper announced ‘To morrow it goes to town, and will hang some months at Abbot’s, when it will be sent to its due destination in Norfolk’. [15] It remained in Abbott’s London studio in Caroline Street from August 1792 until March 1793, by which time it had ‘been a spectacle long enough’. [16] Cowper then became resigned to the fact it was to be shown at the Royal Academy; ‘after having been exhibited in [Abbott’s] room so long, I care not where I am exhibited next. The Public at large are welcome to a sight of me’. [17] But the application arrived too late, ‘only by a day or two’. [18]
For a comparison made in 1838 between the portraits by Abbott and Romney, taken within a month of each other, see NPG 1423.
A copy was made for the Johnson family in 1935 and remains in the mid-nineteenth-century frame previously on NPG 2783; ‘a big frame which has a valuable old pedigree of Cowper, as big as the Picture, - inside it the picture itself, in a narrow frame, being hinged to open like a door in the big frame’. [19]

1 She was also the niece of Cowper’s mother; in 1800 John Johnson was presented by Mrs Bodham to the livings of Yaxham and Welborne (Cowper, Letters, III, 1982, p XXVII); the inscription on NPG 2783 suggests it reverted to him before his aunt’s death.

1 John Johnson thought it was 'indifferently copied and engraved' and the plate by Cooper was preferred for the early editions of Cowper's Private Corr. (see N. Russell, 'Bibliography of William Cowper to 1837', Oxford Bibliographical Society, NS, XII, 1963, 1963, p 204n2).