3 of 7 portraits of William Cowper 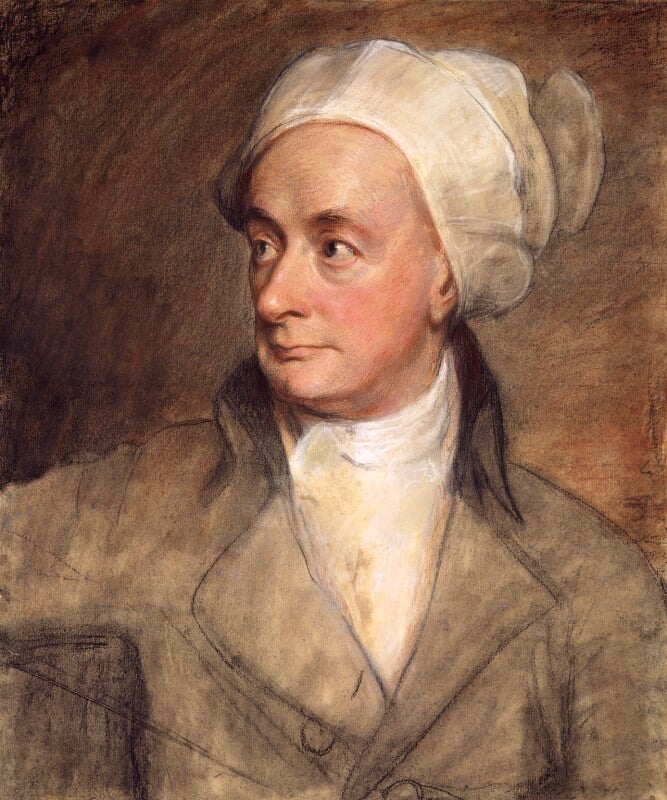 Labels on backing board:1 William Cowper The Poet/Drawn from the life/by George Romney/1792.

The circumstances of this remarkable portrait are well documented in Cowper’s letters. His portrait by Abbott (NPG 2783) being finished, Cowper and his companion Mary Unwins left Weston Underwood on 1 August 1792 for Eartham, [1] the Sussex home of his friend William Hayley, which they had reached by 5 August. [2] Romney had joined them by 16 August [3] and on 25 August Cowper announced that ‘Romney has drawn me in crayons; by the suffrage of all here, extremely like’. [4] According to Hayley, for whom the portrait was made, Romney came to consider it ‘as the nearest approach that he had ever made to a perfect representation of life and character’; he had much wanted to ‘execute a portrait of a person so memorable, and in drawing it he was peculiarly desirous of making the nearest approach to life, that he possibly could: for this purpose he chose to make use of coloured crayons, a mode of painting in which he had indeed little experience’. [5] Hayley greatly admired the portrait, considering that Romney had produced ‘a resemblance so powerful that spectators who contemplated [it] with the original by its side, thought it hardly possible for any similitude to be more striking or more exact’; but Hayley also allowed that for some ‘more conversant with the colloquial, than with the poetic countenance of Cowper’ the portrait might seem ‘to border on extravagance of expression’. [6]
Cowper, who did not otherwise much care for portraiture, addressed a sonnet to Romney: [7]

'To George Romney, Esq. on his picture of me in crayons, drawn at Eartham in the sixty-first year of my age, and in the months of August and September, 1792.

Romney! Expert infallibly to trace,
On chart or canvas, not the form alone,
And ‘semblance, but, however faintly shown,
The mind’s impression too on ev’ry face,
With strokes that time ought never to erase:
Thou hast so pencil’d mine, that though I own
The subject worthless, I have never known
The artist shining with superior grace.
But this I mark, that symptoms none of woe
In thy incomparable work appear:
Well! I am satisfied it should be so,
Since, on maturer thought, the cause is clear;
For in my looks what sorrow could’st thou see
While I was Hayley’s guest, and sat to thee?'
Both artist and poet had a melancholic cast of mind and Romney, said Hayley, had soon appreciated Cowper’s ‘genius, benevolence and ... misfortunes’. [8] Forty years later the poet Bernard Barton reflected that ‘such a picture will hardly ever be taken again unless a mad painter should again have a mad poet for his sitter’. He had just seen the Abbott and Romney portraits, NPG 1423 and NPG 2783, hanging together in the Johnson’s house; while he found the Abbott ‘a beautifully executed painting, with a mild pleasing expression of countenance’, it was the Romney ‘that rivets your attention and engrosses your thought and feeling’. [9]
A copy of NPG 1423 by A. E. Dyer is in the County Hall, Hertford; another was made in 1905 by Frank Nowlan [10] and sold to B. Vaughan Johnson after the sale of NPG 1423; a miserable example belonged to W. Harvey of Peckham in the late nineteenth century. A watercolour copy by Romney’s pupil Isaac Pocock, dated 1799, [11] was sold Christie’s, 13 April 1878, lot 132, bought by John Murray. William Blake, who engraved NPG 1423 in 1802, also made a small copy of the head dated 1801 (private collection) and three others undated (Library of Congress, Washington; Widener Library, Harvard, and the Ashmolean Museum, Oxford); [12] he used Romney’s head again for the tempera head of Cowper in the series of poets which he painted for William Hayley’s study at Felpham (now in Manchester City Art Gallery). [13]

Grey eyes, wearing a white cap, and a grey-green coat; ‘the face is a plain, everyday sort of face, with ruddy, weather-beaten cheeks, and a wide, gentle mouth ... But out of this face glance a pair of eyes which change its whole expression; startled, speaking eyes...’.1