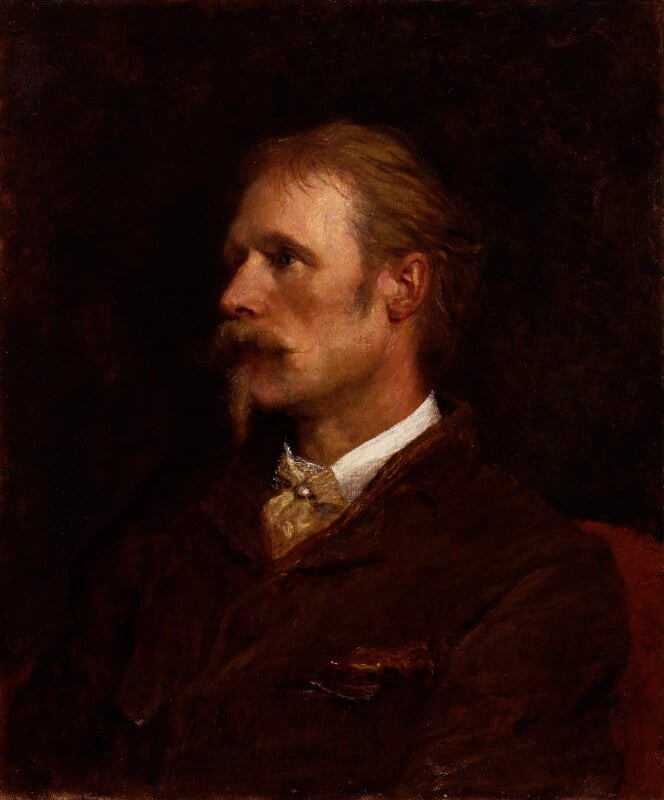 Sitter and artist had been acquainted for some years when this portrait was proposed. Crane recalled that ‘[i]t was at one of the meetings of the Council of Management of the South London Fine Art Gallery, held at Lord Leighton’s studio, that Mr Watts first asked me to give him sittings for a portrait which he painted of me this year (1891) saying “he had so few artists in his collection”’, a reference to Watts’s Hall of Fame [1]. Both men were active in the establishment of the South London Art Gallery in Camberwell (Crane designed a tile floor and Watts laid the foundation stone) and in other efforts to widen access to art, including the National Association for the Advancement of Art and its Application to Industry. In 1882, Watts had purchased Crane’s Renascence of Venus and in 1886 Crane returned the compliment with a sonnet on Watts’s The Soul’s Prism. Both favoured ‘symbolic and figurative’ subjects, Crane remarking that in Britain ‘hardly anyone besides Mr Watts’ showed interest in his own allegorical works; [2] he registered Watts’s death as the loss of a ‘generous and valued friend’. [3] For his part, Watts appears to have admired Crane’s social and artistic idealism; otherwise, as an only moderately successful artist he was an unlikely candidate for the Hall of Fame.

According to Crane, sittings occupied seven two-hour sessions at Watts’s London studio between 19 August and 27 September 1891; Watts ‘used to begin at eleven o’clock in the morning and I sat till one o’clock … at the first laying in he got the likeness and the general effect’; then ‘gradually worked into it, getting solidity and modelling, and towards the last moved up his easel nearer, until he was quite close’. [4] The artist’s wife Mary Seton Watts recorded that the initial painting conveyed the idea of ‘one who never turned his back but marched straight forwards’, [5],the eye appearing to look into ‘a thousand unknown tomorrows’. [6] Watts echoed this, saying ‘I have given it the forward look,’ to which Crane replied ‘I have always looked to the future since I was a boy, and I hope I shall never give up doing so’. [7] Two sittings later, however, Mary Watts thought ‘the soul has gone out like a light – it is nothing more than an ordinary portrait’. [8] During the last scheduled sitting, a visitor brought news of a new invention, the aeroplane (which Crane forecast would be used to bomb besieged cities), and during a short final sitting on 6 October the artist recaptured the sitter’s forward-looking air. [9]

The work is carefully and sweetly painted with smooth and often delicate brushstrokes, especially to delineate Crane’s fair, wispy hair. The light falling from the right makes the pink ear rather prominent. The clothing is more broadly brushed, while the background is roughly scumbled in a mixture of brown and ochre. The colour range is brown/yellow, with red notes in the flesh tones and pocket handkerchief and the chair at Crane’s back. As noted, the sitter’s visible eye is shown gazing into the distance, as if with expectation. The portrait is the primary known likeness in Crane’s relatively small iconography, owing largely to the skill and reputation of the artist.

When exhibited in 1892, the portrait was well received, bringing praise from fellow Academicians that astonished Watts; ‘“Millais”, he said, “used the word sublime”’. [10] Likewise, Herkomer congratulated the artist on his ‘great portrait of Walter Crane’.[11] Publicly the critics were equally impressed. The Athenaeum (F.G. Stephens) wrote: ‘The coat of brown-olive velvet assorts admirably with the rich ruddy brown of the carnations and the lighter brown, with grayish lights, of the hair. The golden underpainting of the flesh, the broad, choice and firm modelling and the noble simplicity of the picture make it an example of what modern portraiture might be. The expression, if somewhat more restful and serene than Mr Crane’s usually is, is first rate, while the likeness is perfect'. [12] Claude Phillips, for the Art Journal, described it as the only portrait ‘this year, which comes within the category of great art: of portraiture as the great masters of the sixteenth century understood it – truthful in higher truth, which aims less at the transient likeness of a human face at one given moment than at an expression of the whole individuality, summed up with a lofty and discerning sympathy in all that is most permanent and essential’. [13] As Phillips also queried the date of the work, thinking it showed Crane some years younger, the sitter confirmed that it had been painted the previous year. [14]

Phillips’s comment also perhaps points to the fact that NPG 1750 is stylistically different from Watts’s other Hall of Fame portraits of 1890–91, being notably fresher and more fluid. Privately, the artist remarked, ‘I assure you it is cared for because of the absence of texture, that which to me is its greatest defect’. [15] Burne-Jones confirmed that Watts did not like to hear the work praised. ‘He likes to think of his vast powers of mind. Of his powerful intellect. He can’t be pacified with anything else, so we’re obliged to mention it. I wonder he’s not satisfied with being a great painter … But he doesn’t count it. He’s not content with any painting he does. He wants to be known as the painter who thought, not as the painter who painted’. [16]

When exhibited at the International exhibition in Brussels in 1897, the likeness was praised for ‘The warm brown complexion, heightened by a ruddy glow [and] the character of the face, at once simple and powerful, [which] stamp this portrait on the mind as that of a master by a master,’[17].

As the exhibition record demonstrates, the work was shown regularly before the Second World War, [18] but later received much less attention, owing to the declining reputations of both artist and sitter; that of Watts has subsequently re-risen, that of Crane to a lesser extent.

Hubert von Herkomer requested permission for his pupil D.A. Wehrschmidt to undertake an engraving (Herkomer to G.F. Watts, 19 Sept. 1892, Watts Letters, Album 11, pp.83–4, NPG Archive) but if executed this has not been located.