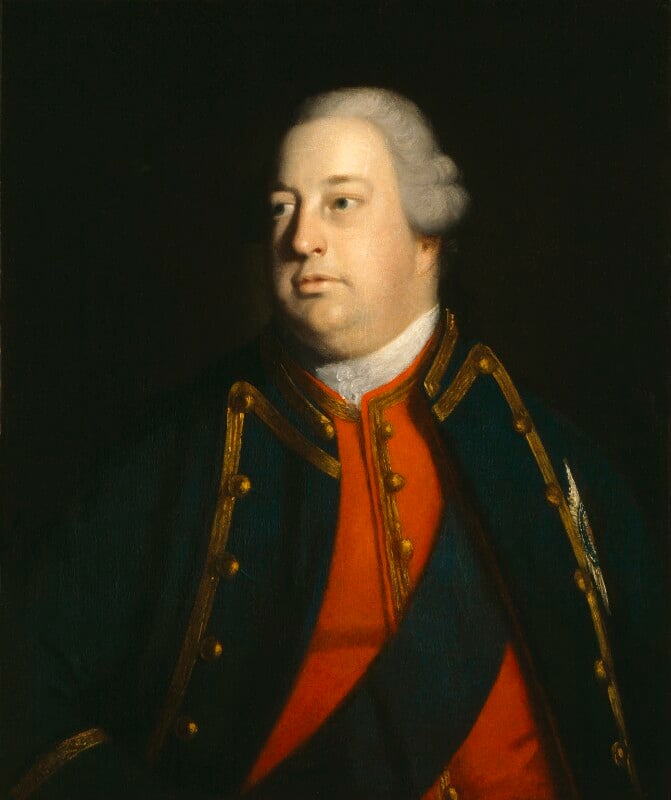 The identification of Reynolds' paintings of Cumberland, whole, three-quarter and short half lengths, present some difficulties. The RA sitter books record three appointments in 1758: 6 March, 20 March and 3 April, time enough to record the sitter's features. Reynolds, in a letter dated 9 September 1777, noted in general that a portrait requires three sittings but if the sitter chooses, the face could be begun and finished in one day. [1] Another appointment is recorded for 1761, 27 July at 11, which could have been for finishing. But which version or versions, whole length or otherwise, are to be associated with these sittings cannot now be known. Of the heads, five at present qualify as products of Reynolds' workshop: NPG 625, which cleaning has revealed to be a picture of quality; Scottish NPG (910), bought 1910 from the collection of the Rev R. F. Elwen and inscribed on the back of the relining canvas as painted for Viscount Keppel by Sir Joshua, 1758; a portrait, like the previous two, in military uniform, Bolingbroke sale, Christie's, 10 December 1943, lot 47; the portrait at Newark Museum, New Jersey, showing the sitter in a general officer's coat, and the portrait in the collection, 1937, of F. W. Dobson, exhibited 'Arts and Antiques in Nottinghamshire', 1937 (523). Only the Newark Museum head has a known line of descent, having come from the Duke of Cambridge's sale, Christie's, 11 June 1904, lot 110. Cambridge was the great-grandson of Cumberland's elder brother Frederick, Prince of Wales, and, like the Mercier of the latter (NPG 2501), the portrait may have belonged to either one of the brothers.
The Reynolds ledgers in the Fitzwilliam Museum show payments for two heads, in both cases for 20 guineas: from a General Hudson, first payment after 17 October 1760, [2] and an undated second payment early in the 1760s from a Colonel Grey. [3] In the sitter book for 1762, under February, Reynolds entered ‘Send the Duke to General Hudson in Sackville Street'. Neither officer has been identified and no sale in either name is recorded by F. Lugt, Repertoire des Catalogues de Ventes, 1600. Since the NPG 625 pattern was engraved by C. Spooner, the last state published in 1761, and by E. Fisher as after a portrait painted in 1760 (J. Chaloner Smith, British Mezzotinto Portraits, 1878-83, 12), and assuming the mezzotint lettering may be relied upon, NPG 625 or something very like it must have been completed by 1760. The portrait could, however, have been engraved while still in the studio, suggesting that NPG 625 might conceivably be the head painted either for General Hudson or Colonel Grey. The sitter abandoned all his commands in 1757, and since he is shown in uniform there may even be grounds for thinking that the portrait was begun in 1756, for which year the sitter books are missing.
The fine whole length in Garter robes at Chatsworth to which NPG 229 conforms uses the same face mask as NPG 625 and is accepted by Waterhouse [4] as the prime version. It may in fact represent Reynolds' final, rather than his first, thoughts on Cumberland.

1) Not the uniform of the 1st foot guards, of which Cumberland was colonel, 1742-57. This would have been a scarlet jacket and blue cuffs and lapels, with a single ring of gold lace on the upper cuff on the undress. No change in the colour of the jacket is visible to the naked eye.

The flesh colour as in other Reynolds of this date may have faded; surface cleaned and polished, August 1895; cleaned, retouched and revarnished 1970, when deep dirt, in the wrinkling (caused by excessive medium) was removed, with considerable improvement to the lighting and modelling.

Bought, 1881, from Colnaghi's; from the collection of the 1st Earl of Northbrook, grandson of the banker Sir Francis Baring (d. 1810). Colnaghi's believed the portrait to have been in the collection of the 2nd Lord Northwick, but this is not his Reynolds, nearly whole length, Phillips, 2 August 1859, lot 407, which went to the Duke of Portland. No other portrait corresponding to this type appears in the 1859 Northwick sale.