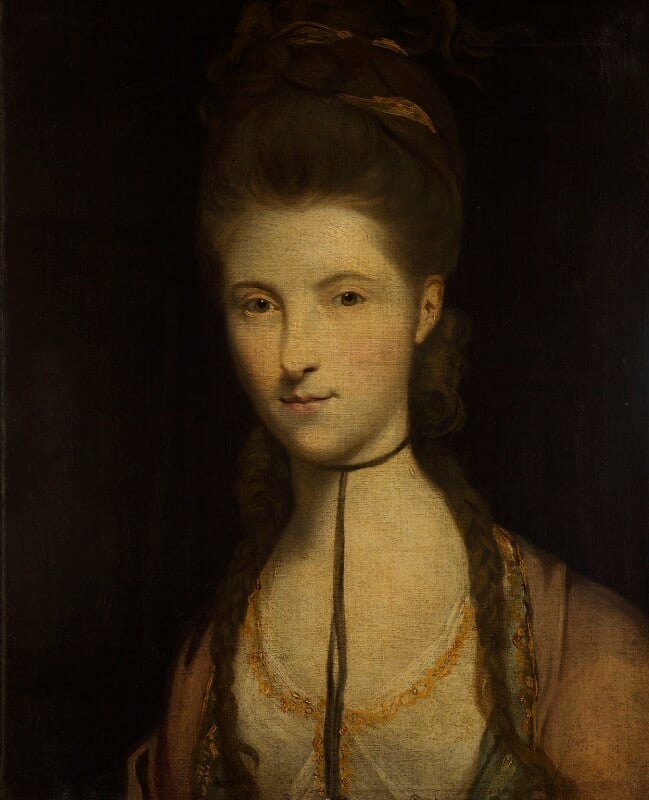 Inscribed on back of canvas in ink: Mrs Anna Damer/born 1748/died 1826/sold April 1864/at Christie's, written over a similar inscription in pencil.

Mrs Damer had sittings from Reynolds in October 1772 for a three-quarter-length probably for her husband the Hon John Damer, son of Lord Dorchester; it was exhibited RA 1773 (236) and belonged in 1845 to her nephew Colonel Dawson Darner and later to the Earl of Portarlington, sold in New York 1895 (Sir Ellis Waterhouse, Reynolds, 1941, p 63). The NPG reduced version, an indifferent copy but probably from Reynolds's studio, is mentioned briefly in Algernon Graves & V. W. Cronin, History of the Works of Sir Joshua Reynolds, 1899, p 228. For some years it belonged to J. H. Anderdon whose annotated RA catalogues in the RA library are of great interest.

Head and shoulders slightly to left in a yellow dress trimmed with green and gold braid, white bodice edged with gold, turban head-dress with black ribbons round throat down to breast (in the original the ribbons ended in a locket); dark hair in long plaits, hazel eyes, pale pink complexion.