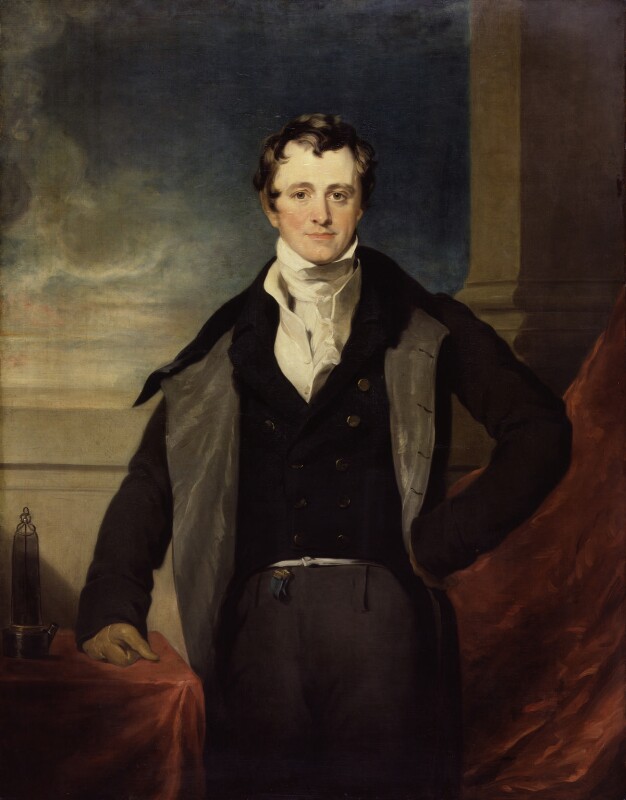 Lawrence's original portrait was exhibited at the Royal Academy in 1821 (171) and presented by Lady Davy to the Royal Society in 1829 when she wrote: 'Being so fortunate as to possess an invaluable little picture of Sir Humphry Davy, I feel enabled to resign the only portrait painted of him by his celebrated friend the President of the Royal Academy and to present it to the Royal Society' (C. R. Weld, History of the Royal Society, 1848, II, p 343).
The NPG copy, according to the vendor, Mrs Isaacs, 'was bought many years ago by my late father' (letter 4 April 1910 in NPG archive); it has every appearance of being Lawrence studio work of fresh and vigorous quality and probably by Richard Evans. Another copy was painted by Pickersgill for the Royal Institution in 1831; a copy formerly in the Cornwall Polytechnic Institute was in the Exeter Exhibition 1873; two small copies were made by Linnell in 1837 for Lord Ashburnham and Lord Lansdowne (British Museum Sketchbook 1837), the Lansdowne copy being sold at Christie's 7 March 1930 (23) bought Gooden & Fox, now Government Art Collection 15181.
Lawrence's oil was used as a model for the statue by W. and T. Wills in the Market Place, Penzance (The Times, 18 October 1872, Illustrated London News, 19 October 1872, pp 371, 373).

'The Heritage from Newton and Linnaeus', Stockholm, 1962.