2 of 19 portraits by Joseph Wright 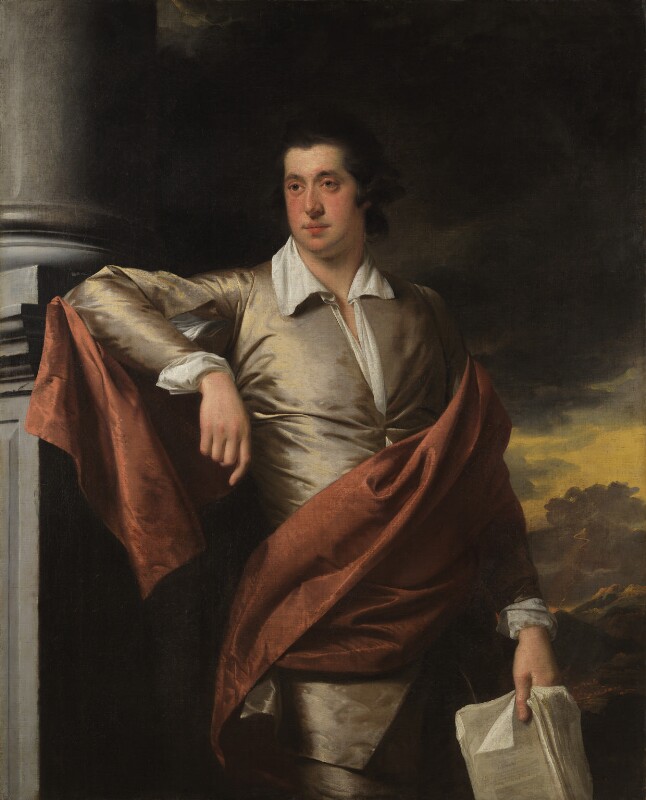 The circumstances of this portrait were described (poetically) by Anna Seward in 1804: [1]

'In the course of the year 1770, Mr Day stood for a full-length picture to Mr Wright of Derby. A strong likeness and a dignified portrait were the result. Drawn as in the open air, the surrounding sky is tempestuous, lurid, and dark, He stands leaning his left arm against a column inscribed to Hambden. Mr Day looks upward, as enthusiastically meditating on the contents of a book, held in his dropped right hand. The open leaf is the oration of that virtuous patriot of the senate, against the grant of ship-money, demanded by King Charles the first. A flash of lightning plays in Mr Day’s hair, and illuminates the contents of the volume.'
Seward’s description was substantially repeated in 1862 by Day’s biographer John Blackman, who further specified that it was painted in Derby in August 1770 and added references to ‘the poetry of nature in the background, the surrounding sky tempestuous and dark, to image forth his gloomy view of society, as he saw it revolving around’. [2] Neither version of this picture bears any inscription, and the references to John Hampden appear fanciful [3] (Egerton [4] even suggested ‘we can be virtually certain’ that the book he holds ‘is by Rousseau, and probably a copy of Emile’). It is, as Alistair Smith first remarked, [5] the portrait of a visionary stoic, in which Van Dyck is recalled not just by the costume (a totally imaginary Van Dyck undress), [6] but by the composition, with the figure casually reclining against a classical column [7] (such elegance is in complete contrast to Wright's Erasmus Darwin, painted probably in the same year, cf. NPG 88).
Wright's accounts of c.1770 list two half lengths of Mr Day at £42, [8] the second being presumably the replica of NPG 2490 acquired by Manchester City Art Gallery in 1975. [9] NPG 2490 was apparently painted for Richard Lovell Edgeworth, one of Day’s closest friends. Three weeks after Day’s sudden death (the result of being thrown from a horse which he was resolved to tame through gentleness), Edgeworth wrote to Thomas Lowndes: ‘I have an excellent picture of Mr Day by Wright; if Mrs Day should wish for it, it is at her service - She may be sure no other person shall have it but one of my own children’. [10] Mrs Day, it appears, did not take the picture, which remained at Edgeworthstown House until 1930.

Grey eyes, black hair, wearing a silver Van Dyck suit with slashed sleeves, a white unbuttoned shirt, and a light brown wrap; in his left hand a number of unbound printed sheets; behind him, a stormy sky broken by a flash of lightning over a mountainous landscape.

1 Where it was recorded by J. Blackman, Memoir of Thomas Day, 1862, p 67.
2 The copy of a receipt from Rose B. Montagu, 24 August 1930, for £100 for a ’Picture of Thomas Day by Wright of Derby’ is on file.
3 Bought ‘Halliwell’, 5gns., which might suggest the picture had been withdrawn, but Sotheby’s archive does not say so (I am grateful to David Moore-Gwyn for this information).