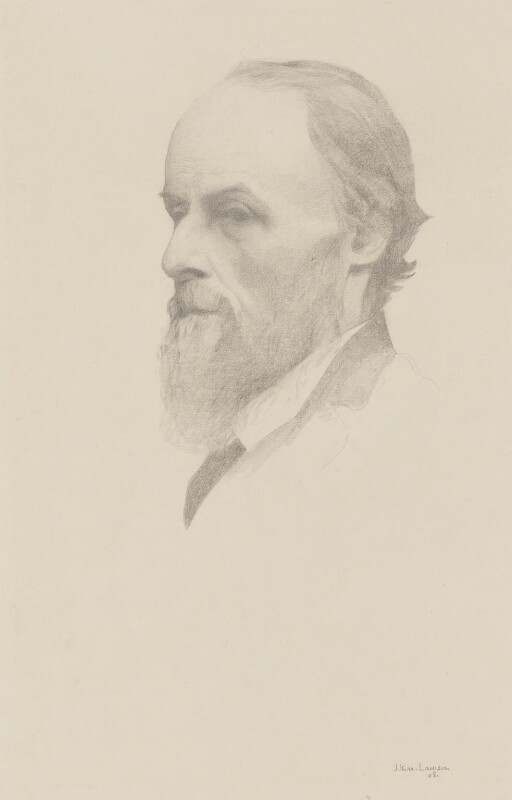 In 1908 the sitter was experiencing the fame of his later career as a novelist and the publication of his third title, Somehow Good. The drawing, which was the basis for a lithograph (see below, ‘Reproductions’), is drawn with a very fine and very soft pencil. It endows De Morgan with an air of elderly distinction (he was 69) rather than the quizzical, puckish appearance seen, for example, in the contemporaneous portraits by his wife (NPG 6358) and the photographer Alvin Langdon Coburn (see ‘All known portraits, Photographs, 1908’).

Sitter and artist were acquainted by the mid-1890s at the latest.[1] From 1892 the De Morgans wintered in Florence, where from 1894 Lawson and his wife made ‘a second home’ near Settignano.[2] During summer months, De Morgan lived at 1 The Vale, Chelsea, not far from Glebe Place, where Lawson had a London studio from 1900.

The drawing was most probably executed in London, since Lawson made a portrait of another Chelsea resident, Joseph Pennell (friend and biographer of Whistler), around the same time. This is very similar in format to the present work. [3] It could, however, have been done in Florence, where in 1907–8 Lawson was engaged in a project creating lithotints of Italian landscape view. [4]

James Kerr-Lawson was born in Scotland and reared in Canada. He studied at the Académie Julian in Paris (1881–4) and moved to London in 1900. He belonged to the International Society of Sculptors, Painters and Gravers, and to the Chelsea Arts Club, and is the artist of five other portraits in the NPG, including that of James Havard Thomas (NPG 2115) which, together with NPG 2116 was purchased from the artist in 1926, following a suggestion by Lord Rothschild. [5]

After NPG 2116 was acquired, De Morgan’s sister-in-law Wilhelmina Stirling wrote to say that she had the sitter’s ‘own written statement that he considered it bore not the remotest resemblance to himself, and, though clever as a fancy sketch, [was] a complete failure at any sort of likeness!’ [6]

In a second letter she repeated her dismay that ‘the sketch which has been purchased to represent him in the National Portrait Gallery unfortunately has not even the merit of being a bad likeness of the original, but bears no sort of resemblance to him whatsoever’ (original emphasis). She continued:

It is one of which he [De Morgan] had the greatest horror personally and it is a matter of great distress to all his relations that such a misrepresentation of him should go down to posterity. It was offered first to some of his relations but not one of them would purchase it, they disliked it so intensely. A suggestion was made at the time, however, that it should be bought in by the family in order to destroy it. [7]

Mrs Stirling offered to take the drawing away, but it was not released. At the same time, NPG 6358, which had been bequeathed to the Gallery in 1917, was reconsidered by the Trustees (Minutes 23 June 1927) and declined, on the grounds that Lawson’s drawing sufficiently represented the subject.

Kerr-Lawson’s lithograph after the drawing was produced in 1909; it reverses the image but is otherwise a faithful reproduction (see ‘All known portraits, By other artists, 1909’).

1) Kerr-Lawson recalled dining with William and Evelyn De Morgan in 1895, according to an article in Saturday Night (Toronto), 5 June 1926, p.3, cited Lamb 1983, p.39.
2) Lamb 1983, p.24.
3) See http://cybermuse.gallery.ca/cybermuse/search/artwork_zoom_e.jsp?mkey=10765
4) Examples are in the Prints & Drawings coll., BM, London, and NG Canada
5) See NPG RP 2115. The sequence of events was as follows: on 17 Feb. 1926 Lord Rothschild wrote to the Earl of Crawford and Balcarres, vice-chairman of the NPG Trustees, saying Mr and Mrs Kerr-Lawson were friends of his mother and that in Lawson’s current exhibition ‘are some very good drawings of some famous people which I think ought to be in the National Portrait Gallery’. His examples included De Morgan. Crawford replied citing the ten-year rule. NPG Director {J.D. Milner} viewed the drawings, noting that they were all ‘smaller than life’. Crawford’s opinion on 24 Feb. was that the asking price of £100 for four drawings was ‘rather high considering who these people are, and that presumably other portraits would be available later on, should we require them.’ He added, ‘I feel no particular enthusiasm about any of the individuals in question’. Milner, however, wrote to Lawson on 26 Feb. inviting him to submit five portraits, of which two (NPG 2115 and 2116) were purchased on 4 May 1926, for £25 each.
6) Letter from A.M.W. Stirling to ‘Dear Sir’ [J.D. Milner], 7 June 1927, NPG RP 6358.
7) Letter from A.M.W. Stirling to ‘Dear Sir’ [J.D. Milner], 27 June 1927, NPG RP 2116.

The artist, from whom purchased 1926.

Probably Beaux-Arts Gallery, London, 1926 (location of exhibition inferred from a photographic credit from later that year).