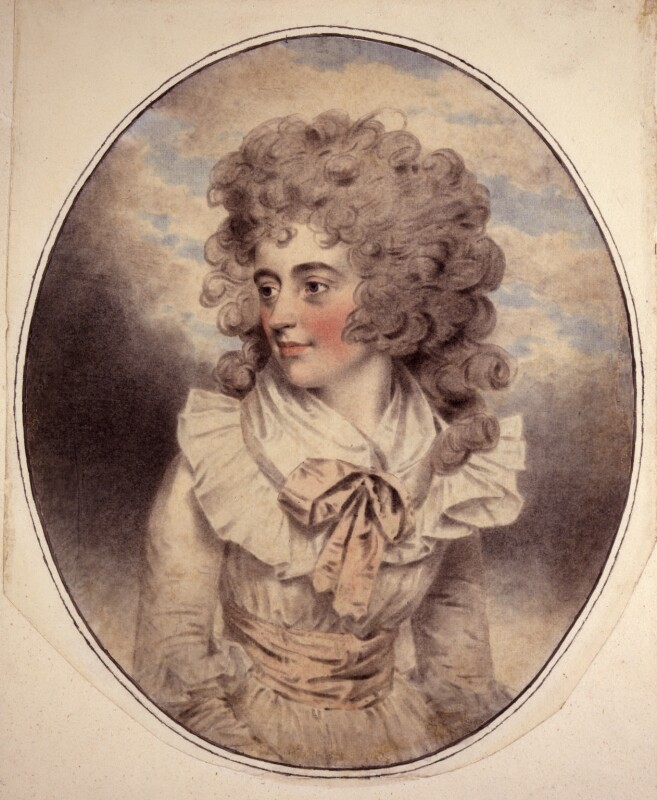 A paper formerly on the original mount in Downman's handwriting, now in registered packet 2652 in NPG archive reads: again Miss Farren: 1787. Original: the celebrated and admired Actress. I drew one of this for the Duke of Richmond. There was a Print made from this.

A performance of The School for Scandal in 1785 inspired Lord Derby to commission from Downman a picture of Thomas King and Miss Farren as 'Sir Peter and Lady Teazle'; this is at Knowsley (Sir George Scharf’s Sketchbooks, 78, 7a), and a drawing of King alone is in the British Museum (George C. Williamson, John Downman A.R.A, III.3.29). They were followed by a watercolour drawing of King and Farren in The Heiress, exhibited RA 1787 (505) and engraved by Jones 1787, and by a drawing, probably NPG 2652, exhibited RA 1788 (463) together with a drawing of Mrs Siddons (NPG 2651). Duplicates by Downman formed part of a series for the scenery of the Duke of Richmond's private theatricals in Richmond House where Miss Farren acted as producer (Percy Noble, Anne Seymour Damer, 1908, pp 96-104).
A miniature version now in a private collection was originally at Strawberry Hill and inscribed in Horace Walpole's hand: Miss Farren/The Incomparable Actress/1787, Strawberry Hill sale 6 May 1842 (50) bought by the Countess of Wilton, reproduced in Daphne Foskett's Collecting Miniatures, 1979, colour plate 29E.

Stipple (in reverse) by Collyer 'from a drawing made by Mr Downman for the Scenery at Richmond House', printed 14 February 1788; stipple by Ridley for The Monthly Mirror, 1 December 1796.