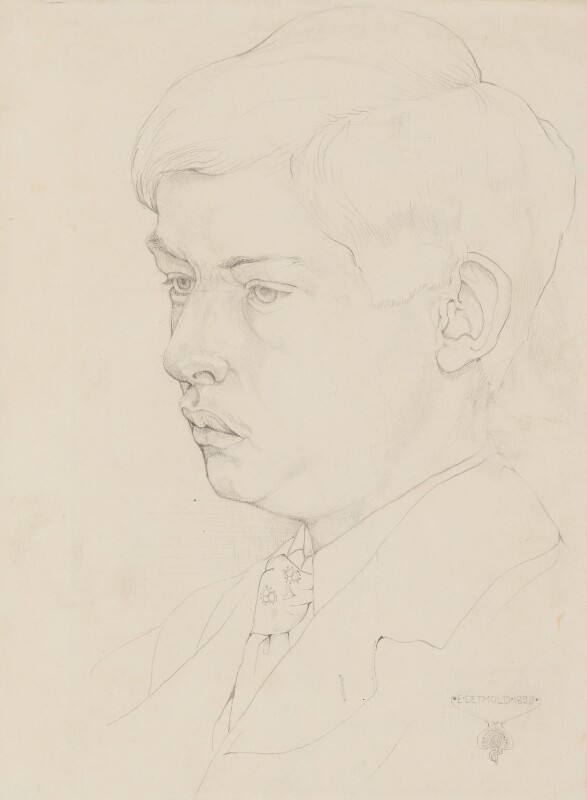 Marion Harry Spielmann, editor of the Magazine of Art from 1886 to 1904, [1] was an early admirer of the Detmold brothers’ work. He may have owned NPG 3036 and NPG 3037 in 1900, the date of his magazine article on the brothers who were then aged ‘only just sixteen’. [2] The drawings formed part of the group that he gave the Gallery in 1939. They are valuable as the only extant portraits of the brothers.

Campbell Dodgson, curator of prints and drawings at the British Museum, was another admirer. In 1910 he wrote:

In 1899 began what is the most curious and interesting phenomenon in their joint career, the collaboration of both brothers in producing a single [etched] plate … and their joint labour resulted … in an effect so completely finished and harmonious, that it would be almost incredible, but for their direct assurance, that more than one brain should have conceived, or one hand executed, a work so completely at unity with itself. [3]

Dodgson’s article included a catalogue raisonné and he collected their works: ‘I never had the opportunity of seeing them at work … but I have looked along with them at the work of other artists, and noticed how simultaneously both would select the same object, at the first glance and without hesitation, for praise or blame.’ [4]

Stylistic differences do emerge in the brothers’ draughtmanship, however, and in the 1899 portrait drawings Maurice – the ‘older’ twin and first to commit suicide – shows a firmer sense of composition. Edward Burne-Jones perceived it in 1897: ‘One of these little chaps is a naturalist, the other a designer.’ [5]

In 1983 Richard Verdi, curator of the Detmold centenary exhibition, knew of no other portraits of the brothers.[6]

Given by Marion Harry Spielmann, 1939.