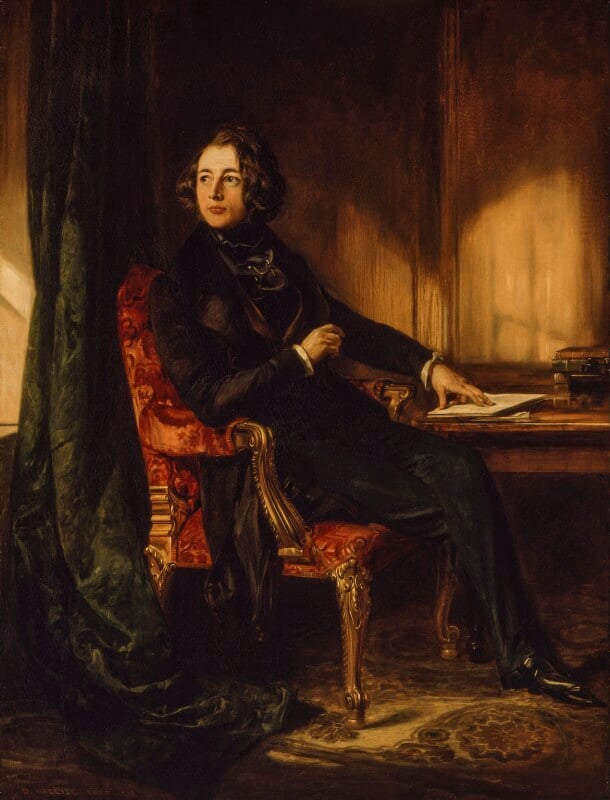 Probably painted before 28 June 1839, for on that day Dickens wrote to J. P. Harley (Letters, I, 1965, 558): 'Maclise has made another face of me, which all people say is astonishing'. On the same day, Dickens wrote to Maclise inviting him to come down to Elm Cottage, Petersham, which he had taken for the summer (Letters, I, 557). Maclise did visit him there, joining in the garden sports, such as 'bar-leaping, bowling and quoits' with a will (Forster, II, 159-60). A letter from Dickens, probably written in June 1839, to William Finden, the engraver of the portrait, is clear evidence that Finden was in possession of it by the summer (Letters, I, 558): 'My mother who is resident in the country and shortly returning to the place from whence she came, is very anxious before she leaves town to see the Portrait of her beloved son.' Finden's engraving (example in NPG) appeared in the final number of the serialized Nicholas Nickleby in October 1839, and was subsequently used as the frontispiece of the first collected edition. An engraving by R. Graves (example in NPG), after this portrait, was exhibited RA, 1873 (1251); it was also engraved by C. H. Jeens (example in NPG). According to Forster, the finished portrait was presented to Dickens by the publishers Chapman and Hall at the Nickleby dinner held in the Albion, Aldersgate Street, on 5 October 1839. [1] The following letters between Maclise and Dickens, if they relate to this picture, as seems probable, make clear that Maclise himself presented Dickens with the portrait, the publishers presumably only having purchased the copyright (O'Driscoll, p 67):

'My dear Dickens,
How could you think of sending me a cheque for what was to me a matter of gratification? I am almost inclined to be offended with you. May I not be permitted to give some proof of the value I attach to your friendship? I return the cheque, and regret that you should have thought it necessary to send it to
Yours faithfully
Daniel Maclise.'
Dickens replied to this (O'Driscoll, p 67):

'Do not be offended. I quite appreciate the feeling which induced you to return what I sent you: notwithstanding, I must ask you to take it back again. If I could have contemplated for an instant the selfish engrossment of so much of your time and extraordinary powers, I should have had no need (knowing you, I knew that well) to resort to the little device I played off. I will take anything else from you at any time that you will give me, any scrap from your hand; but I entreat you not to disturb this matter. I am willing to be your debtor for anything else in the whole wide range of your art, as you shall very readily find whenever you put me to the proof.'
It is unlikely that Maclise did accept the cheque, as he was obsessively scrupulous and proud. J. W. T. Ley in his edition of Forster's Life (I, 290) surmised that these letters referred not to the 1839 portrait of Dickens, but to Maclise's picture of a 'Girl at the Waterfall' of 1842 in the Victoria and Albert Museum. The model for this was Georgina Hogarth, and Dickens was so eager to own and pay for the picture, that he bought it through his friend Charles Beard in order to deceive Maclise, who would undoubtedly have given it to him (see Letters, Nonesuch edition, 1938, I, 494-5). The letters quoted above do not seem to refer to this incident, as there was no question then of Dickens sending a cheque direct to Maclise. It is much more likely that Dickens, having experienced Maclise's generosity over the question of his own portrait, would on the second occasion, resort to fraud. It seems fairly certain, therefore, that it was Maclise himself who presented the portrait to Dickens, and not Chapman and Hall.
According to all accounts the portrait was astonishingly like, and it remains the most convincing image of the young Dickens, as well as one of Maclise's masterpieces. Thackeray wrote: 'as a likeness perfectly amazing; a looking-glass could not render a better facsimile. Here we have the real identical man Dickens: the artist must have understood the inward Boz as well as the outward before he made this admirable representation of him' (Fraser's Magazine, XXII, 113). George Eliot was less complimentary, referring to that 'keepsakey, impossible face which Maclise gave him' (George Eliot, III, 145).
Maclise was a close friend of Dickens for many years, and, with Forster, they formed an intimate trio. The novelist delighted in his easy and affable society. In 1843 Maclise did a profile drawing of Dickens, his wife and sister-in-law, and in 1844 a drawing of Dickens reading The Chimes to his friends in Forster's chambers (both in the Victoria and Albert Museum, F76 and F74). He painted Mrs Dickens in 1848 (a pendant to this portrait) exhibited RA, 1848 (357), under the erroneous title of 'Mr Charles Dickens' (see Frith, H, 30-1). It was in the Burdett-Coutts sale, Christie's, 5 May 1922 (lot 232), and was last recorded in the collection of Mrs Mills, 1946. In 1842 Maclise did a crayon drawing of four of Dickens' children, as a keepsake, just before the novelist's tour of the United States (collection of Cedric Dickens). Although Maclise and Dickens rarely met in later life, Dickens paid a warm tribute to Maclise's genius, when replying for 'Literature' at the RA dinner of 1870, shortly after Maclise's death and shortly before his own (Forster III, 495-6).

Commissioned by the publishers, Chapman and Hall, to be engraved for the frontispiece of Nicholas Nickleby; presented to Dickens either by Chapman and Hall or by Maclise; Dickens Sale, Christie's, 9 July 1870 (lot 40), bought by the Reverend Sir Edward Repps-Jodrell, and bequeathed by him to the National Gallery, 1888; on loan from the National Gallery since 1898, and now on loan from the Tate Gallery.