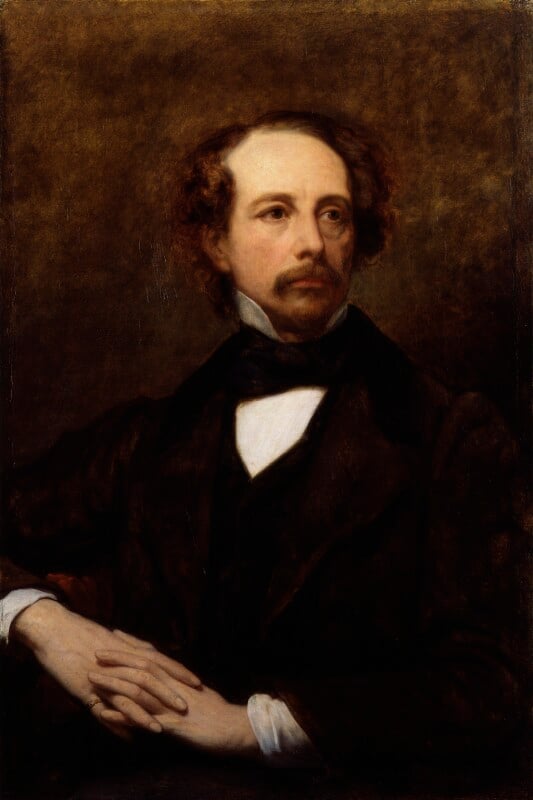 Dickens met Ary Scheffer soon after his arrival in Paris in October 1855 on an extended visit. Scheffer introduced him to several distinguished Frenchmen of the day, and insisted on painting his portrait. Sittings began in November, and on the 23rd of that month Dickens wrote to the artist postponing an appointment (Letters, Nonesuch edition, II, 710). Shortly afterwards he wrote to Forster in some desperation (Letters, II, 710):

'You may faintly imagine what I have suffered from sitting to Scheffer every day since I came back. He is a most noble fellow, and I have the greatest pleasure in his society, and have made all sorts of acquaintances at his house; but I can scarcely express how uneasy and unsettled it makes me to sit, sit, sit, with Little Dorritt on my mind, and the Christmas business too - though that is now happily dismissed. On Monday afternoon, and all day on Wednesday, I am going to sit again. And the crowning feature is, that I do not discern the slightest resemblance, either in his portrait or his brother's! They both peg away at me at the same time.'
On 10 January of the following year Dickens wrote to Miss Burdett-Coutts telling her that the portrait was finished, though complaining still of a lack of verisimilitude (Letters, II, 727). On 19 January, however, he wrote to Wilkie Collins (Letters, II, 733): 'I have been sitting to Scheffer to-day - conceive this, if you please, with No.5 [of Little Dorritt] upon my soul - four hours!!' He wrote to Forster the next day (Letters, II, 734):

'The nightmare portrait is nearly done; and Scheffer promises that an interminable sitting next Saturday, beginning at 10 o'clock in the morning, shall finish it. It is a fine spirited head, painted at his very best, and with a very easy and natural appearance in it. But it does not look to me at all like, nor does it strike me that if I saw it in a gallery I should suppose myself to be the original. It is always possible that I don't know my own face.'
This remained Dickens' opinion of the portrait, in spite of further sittings in March (Letters, II, 754), caused by Scheffer's own dissatisfaction with the likeness. Before its first exhibition, Dickens wrote to Maclise, on Scheffer's behalf, about the size of frames allowed by the Royal Academy (Letters, II, 740), and he was proud of its success there. He wrote to his wife from London (Letters, II, 769):

'When you see Scheffer, tell him from me that Eastlake, in his speech at the dinner, referred to the portrait as 'a contribution from a distinguished man of genius in France, worthy of himself and of his subject'.
Nevertheless the portrait remains one of the least satisfactory likenesses of Dickens. The novelist told Frith that when Scheffer first met him he exclaimed (Frith, I, 310; the same story is told in Letters, III, 241):

''You are not at all like what I had expected to see you; you are like a Dutch skipper'. As for the picture he did of me, I can only say that it is neither like me nor a Dutch skipper.'
A copy of the NPG portrait by Malcolm Stewart was exhibited Dickens Exhibition, Memorial Hall, London, March 1903 (350).
Henri Scheffer's portrait, painted at the same time as the NPG portrait, was, according to Forster, 'greatly inferior'. It was sold at Christie's, 11 July 1863 (lot 104), from the Arnold Scheffer collection, and was erroneously stated to have been exhibited at the Royal Academy. It was bought in, and resold at Christie's, 25 February 1865 (lot 110), bought by the dealer, Flatou.

The sitter; purchased from the Dickens Estate, through Messrs Colnaghi, 1870.