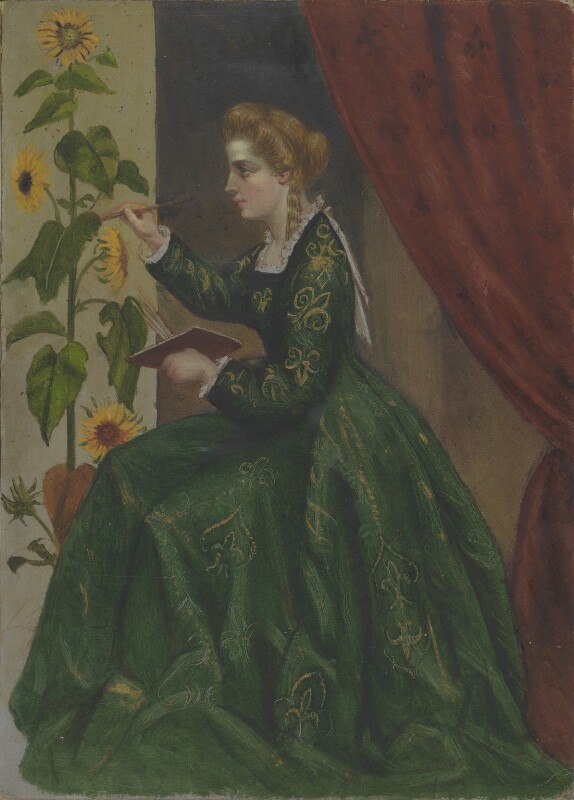 This small portrait by an unpractised artist shows the sitter at work on a mural decoration.

In the early 1860s, the sitter and her first husband, Mark Pattison, took holidays at Bamburgh Castle, on the coast of Northumberland. While there, she visited Wallington, the home of Sir Walter Trevelyan and his wife Pauline (née Jermyn), a friend of Emilia from before her marriage. Both women were artist amateurs. At Wallington the Trevelyans had a central courtyard roofed over to create a dual-height pillared hall, which was decorated with paintings, including a sequence of large canvases by William Bell Scott depicting scenes from Northumbrian history. On the piers around the hall, Pauline Trevelyan invited guests to paint botanical motifs; other contributors included Arthur Hughes and John Ruskin. In this portrait, Emilia Francis Pattison is shown at work on ‘her’ pier, with a sunflower motif, which remains in situ. [1] According to a recent biographer, in correspondence with Pauline, Emilia presented herself as continuing her own art career;[2] participation in the mural project supports this notion, although by 1863 she was relinquishing art practice in favour of criticism.

She is depicted wearing a dark green, long renaissance-style gown, decorated as if embroidered with fleur-de-lis in gold. The presumption is that this dress was indeed worn as the painting was in progress; she is seen wearing a similarly full-skirted brocade dress in a contemporary photograph. [3] The green gown was described by Charles Dilke as inspired by ‘the Venetian colour revival, inaugurated by Dante Rossetti and his friends. Her hair is rightly depicted as of a bright gold, very different from the duller colour it assumed during the years of her life following on her first great illness, of 1867–8.’ [4] To obscure the actual background, the artist added a conventionalized dark red drape to the right of the figure.

The exact date of the portrait is unrecorded. The pillars were available for decoration from 1857 but painting began sometime later. The Pattisons visited Northumberland each year from 1861 to 1864. [5] William Bell Scott, in recording Emilia’s contribution to the scheme, described her as ‘one of the most perfectly lovely women in the world’, ‘lately married to the Master [sic] of Lincoln’ and ‘her hair en toupie like the Queen Anne time, with two loose ringlets hanging from the back of the ears in front of the shoulder’. [6] According to Charles Dilke, ‘Sir George Trevelyan [his close political associate and son of the cousin to whom Wallington was bequeathed] who has been kind enough to assist me in a search for dates, is of the opinion that the sunflowers were painted at a later visit than one she made in the year of her marriage [1861], and before his return from India in 1864. He believes that he remembers seeing the sunflowers there for the first time [in 1864].’ [7] This would date the portrait to 1862 or 1863; in the latter year Emilia was at Wallington from 1 to 22 September.

The attribution has hitherto been unclear. The signature by Laura Capel-Lofft is not easily visible, and until recently the work was attributed to Pauline Trevelyan, following the donor’s statements. In 1905 he wrote, ‘There is in my possession a most interesting early portrait of Lady Dilke by Lady Trevelyan, representing her engaged in painting, in the hall at Wallington, a sunflower on a pilaster.’[8] Later the same year, in the letter respecting his bequest of the work, he listed it as ‘painted at Wallington by Pauline (Jermyn) wife to Sir Walter Trevelyan, and given to Mark Pattison. It has historical connection with the “P.R.B”’ [9] These statements reflect the donor’s belief when he published the portrait [10] that it was executed by Pauline Trevelyan and presented to Emilia’s then husband at around the same date. It was delivered to the NPG on 2 May 1911 as ‘Portrait of Emilia Lady Dilke, by Lady Trevelyan’. [11]

However, both the signature and the inscription on the back of the work indicate that it is the work of Pauline Trevelyan’s friend and successor. The inscription reads ‘Mrs Mark Pattison taken by L.C.T. when painting Sun-flower in Hall at Wallington’. The initials are those of Laura Capel Lofft after she became Sir Walter’s second wife in 1867, and the inscription must therefore have been added between 1867 and 1879, when she and her husband both died.

The question is complicated by a pencil drawing of the same sitter on the back of the portrait, but although this shows the sitter in similar aspect, she is looking down, possibly drawing on a sheet of paper, not on a wall; the inscription must therefore refer to the painting on the front.

The conflicting information and perhaps the discovery of the second drawing presumably led Charles Dilke to inquire again of George Trevelyan, who replied:

He added an unsigned note labelled ‘Private and Confidential’:

The second Lady Trevelyan was a singular person. She was the most accomplished person I ever knew who had no intellectual distinction whatever. One stroke will perhaps suffice. She painted a quantity of bright blue ribbon into an absolutely perfect and beautiful Hoppner of a very lovely woman. She was kindly and clinging – in her way; and I have no doubt, although I do not remember it, that Lady Dilke both fascinated and dominated her. [13]

Following these communications, Charles Dilke included a note in his private catalogue of the extensive art collection in his possession stating that

L. Capel-Loft [sic] used to colour her predecessor’s drawings! She was the daughter of Capel-Loft of Troston Hall, and a great friend of Pauline Jermyn. She was older than Pauline Trevelyan. Sir Walter married her in 1867 – and she survived him by ten days in 1879. The drawing in front is probably by Pauline Trevelyan, coloured by L. Capel-Loft, and that on the back by the latter, and sent after she had become L.C.T., i.e. the second Lady Trevelyan of Sir Walter. [14]

[B]oth Lady Trevelyan and Miss Capel Lofft drew her as she sat painting her sunflowers. Miss Lofft’s is only a pencil sketch, with rather conventionally Pre-Raphaelite features and the hair caught in a great bun at the back of the neck, but Lady Trevelyan’s portrait is utterly charming … and depicts Mrs Pattison in a sort of fancy dress of stiff green brocade. Her bright golden hair is puffed out with one long plait descending behind the left ear. She is depicted in profile and her right hand is just putting the finishing touches on one of the sunflower leaves. [16]

However, taken together the signature and inscription suggest that the work should be attributed solely to Laura (Capel-Lofft) Trevelyan.

Laura Capel-Lofft was a childhood friend of Pauline who came to Wallington as her companion and carer. She was described as ‘a dumpy little woman with an aptitude for painting portraits’, [17] although on the evidence of the present work her skill remained undeveloped. After Pauline Trevelyan’s death, Emilia wrote in condolence to Laura, alluding to the ‘charming visit to Wallington promised for this autumn’, and to the ‘loss that cannot be replaced, there are so few at all approaching her in value and truth in the world’; she added that she was trying to draw landscapes, but ‘wish very much that I had you or some other discreet and learned artist by my side to administer a little comfort or instruction.’ [18]

Sitter and artist were therefore mutual friends, although they do not seem to have maintained the friendship for long after Pauline’s death. The date at which NPG 1828a passed from the artist is not precisely known, but must have been after 1867. It could have been given to Mark Pattison at any date between then and 1880 (perhaps following the Trevelyans’ deaths in 1879) and inherited by the sitter on his death. Emilia, who must have known the correct artist, evidently did not explain this to Charles Dilke; or perhaps he misunderstood her reference to ‘Lady Trevelyan’.

The pencil drawing on the reverse side shows the same sitter half-length, seated in profile to left, looking down at a folio sheet, or perhaps sketching on it. It could be a preliminary sketch or study for the coloured portrait and in the absence of other evidence can be attributed to the same artist. The support is of the kind commonly referred to as Academy board, prepared by artists’ suppliers with a pale surface ground ready for oil painting (here on both sides).

For the portrait’s acquisition by the NPG, see NPG 1828.

More recently, the work has been described by Kali Israel as portraying Emilia as ‘someone who has made herself into something to be represented … depicted in the act of making representations; the painting and the painted Mrs Pattison is art object and artist twice over’. [19] Citing the sitter’s reputation while wife of Pattison, Israel comments that she exploited ‘the outlandishness of her status as a woman of intellect and politics in Oxford … Emphasising her gender in elaborately “artistic” dress and manner, she covertly suggested that gender itself is a matter of art and artifice, of convention, aesthetics, and perception.’ [20] Colleen Denney’s extensive consideration of Emilia Dilke’s self-presentation in the wake of her second husband’s involvement in a sexual scandal (which accepts the earlier attribution of dual authorship) agrees with Israel, adding:

In the portrait, her early dress style itself mimics her study of Renaissance art. Further, her study of French art … is symbolized in the fleur-de-lis pattern on her dress and on the curtain behind her. Her friends often framed her, here literally, as ‘other’, on the basis of her studies of French Renaissance and French eighteenth-century art. These positionings made her approach to dress stand out differently from that of the somber mode of dress of other women at Oxford … It is a portrait that lays out her identity as rooted in her intellectual pursuits … The visual evidence suggests that Francis Pattison completely rejected convention while a young woman at Oxford. She was young, vivacious and full of life. [21]

as Dilke observed in the memoir, in the Trevelyan portrait [Emilia] took on a particularly Pre-Raphaelite mantle of beauty, her ‘decided chin and heavy brow’ idealized into those of a typical Pre-Raphaelite model influenced by Bell Scott and Ruskin. Judging by the way she is depicted, the artists [i.e. Pauline and Laura Trevelyan] sought to position her as an artist type. Sometimes it is easier to buy into other people’s perceptions of us and live up to those expectations than it is to strike out differently. But for Mrs Pattison at Oxford partly of her own doing, difference was the expectation. [22]