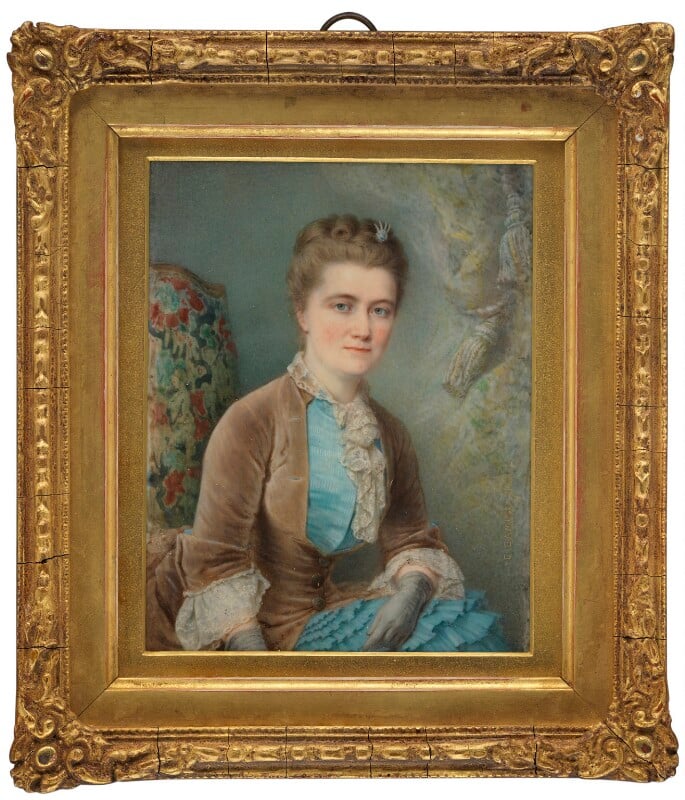 This large miniature was executed in Paris, where the sitter, then Mrs Mark Pattison, was a frequent visitor owing to her art criticism and researches; she reviewed the Salon in May 1862, and her book Claude Lorrain, sa vie et ses oeuvres, would be published there in 1884. No information is available on the circumstances of the commission. The sitter was known to the academic art world in Paris, and could have known the artist, possibly through her friendship with Eugène Müntz, fellow art historian and librarian at the École des Beaux-Arts, who had persuaded her to embark on the study of Claude. It is, however, equally likely that the miniature was painted from a photograph.

Charles Camino ‘is not well-known today [but] was a significant figure in the production of miniatures, which he regularly showed at the Parisian Salons from 1857 onwards’. [1] His clients included wealthy Parisian and American collectors; it is known that by 1882 Camino could charge one of the latter 1000frs. per portrait, and worked from photographs. [2] If a comparable fee was asked for the present work, the identity of the purchaser is hard to determine, but is unlikely to have been Mark Pattison; just possibly the sitter used her own earnings. It may also be noted that Sir Charles Dilke, by this date a close friend and correspondent, was frequently in Paris on diplomatic business during 1881, returning again at Easter 1882.

The sitter is shown wearing a pale blue dress with flounced skirt under a brown velvet overdress, which is ‘gathered up at the back in imitation of the polonaise gowns of the 1770–80s’. Together with the lace collar, jabot, sleeve ruffles, large buttons, long kid gloves and pale blue diamond aigrette hair-ornament, the costume reflects the contemporary ‘revival of interest in ancien-régime taste and luxury’, [3] as well as the sitter’s interest in eighteenth-century French material culture. Customarily, ‘[h]er dress recalled the canvases of Boucher, Van Loo and Watteau, which she loved’. [4] A very similar overdress is seen in a photograph taken after her second marriage in 1885 (see ‘All known portraits, Photographs, publ. 1894’). As in other likenesses, the clothes accentuate her small waist.

The work was listed among the items in ‘Lady Dilke’s bedroom’ in the inventory of art works at 76 Sloane Street in 1885. [5] It was acquired from the estate of Sir Charles Dilke in 1911 with portraits of Henry and Millicent Fawcett|mp01548} (NPG 1603) and Joseph Chamberlain (NPG 1604), and NPG 1828a. After drafting a new will following Emilia’s death, Charles wrote to tell National Portrait Gallery Director Lionel Cust of his artwork dispositions, [6] listing ‘a bad picture’ (unidentified) of his wife that he intended to destroy or return to the artist and the small work ‘painted at Wallington’ (NPG 1828a), which he intended to offer to the NPG. But, he added:

if it were then accepted, I should not like it to be alone… What shall I set with it? There is a big Herkomer [NPG 5288]. There is a beautiful miniature just done for me from that photograph of Miss E.F.Strong in 1861 … there are two small water-colour portraits of Mrs Mark Pattison,. by Victor Pollet… There is a Camino ‘large miniature’ of the same. [7] There is a small pen and ink portrait of Mrs Pattison by herself: not flattering. There is the ‘J.P’ (?Portaels) watercolour of 1864 named in the Memoir. There is the W.B. Scott similar one also named.