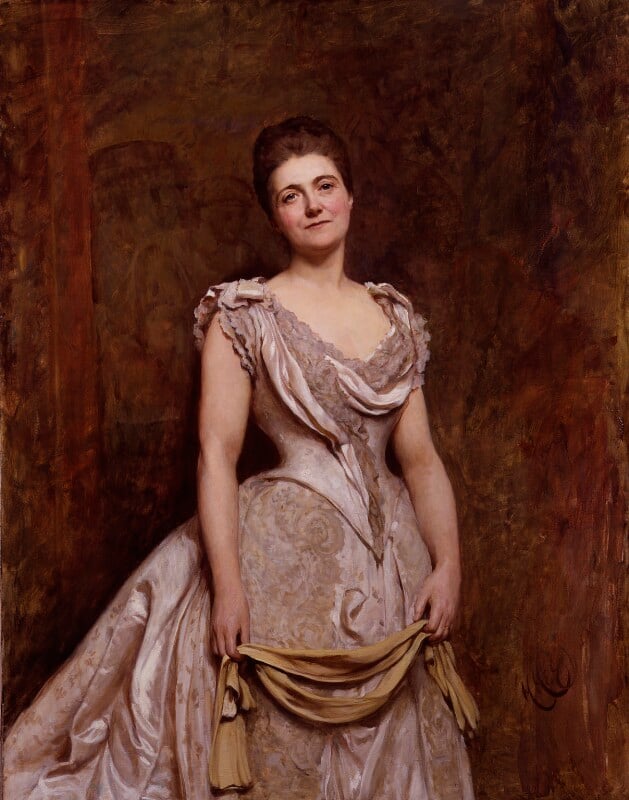 This work was commissioned in 1887 by the sitter’s husband. [1] At this date she was aged 46 and the portrait was perhaps begun at the Dilkes’s home, 76 Sloane Street, Chelsea. It may have been conceived as a ‘high society’ portrait of the wife of a prominent politician, destined to hang in the premier reception room of their house. As such it conveys the elegance of her figure and costume, and includes no allusion to her own career or intellectual achievements. In the event, however, she never became a major political hostess, and the bravura of the portrait, which reflected the Dilkes’s ambitious hopes at this period, now endows it with a certain melancholy character.

She is shown wearing a fashionable evening gown of heavy greyish-white satin trimmed with lace, and holding gloves. A similar gown was described in a letter of June 1885, when the sitter was preparing for the Queen’s Birthday Ball in Ootacamund (Tamil Nadu, India): ‘cream coloured silk draped with cream coloured china crêpe spotted with little tufts of cream coloured silk, the train is long, the body [bodice] is low, but my gloves reach nearly to my shoulders as they are now worn in Paris’. [2] This may indeed be the dress in which she is depicted. Aileen Ribeiro writes

Never a beautiful woman in the conventional sense, she is not flattered by the artist but her intelligence and engaging personality are clearly shown. A middle-aged woman, her figure owes more to art than to nature, enhanced as it probably is by a new steam-moulded corset…. Under her dress Lady Dilke wears a bustle of wire and/or horsehair, which helps to create the heavy, sculptural folds characteristic of the formal toilette with its train. Herkomer has solved the problem of what to do with the hands by making a feature of Lady Dilke’s long pale yellow evening gloves, which she holds in an echo of the pleated and swagged drapery on her bodice.

Ribeiro adds, ‘No doubt her art-historical knowledge [of eighteenth-century French art and design] would make her particularly aware and appreciative of the way in which – by the 1880s – the eighteenth century had begun to influence fashionable dress.’ [3]

Surviving correspondence indicates that the work was completed in summer 1887, for a fee of 500 guineas. Requesting payment, the artist wrote to the sitter’s husband: ‘I hope the picture may give you continued satisfaction and that I may have the opportunity of seeing you and Lady Dilke from time to time now that the anxiety about the portrait is over.’ Acknowledging Dilke’s cheque on 19 September, he added, ‘Your kind words about the portrait were most welcome! [The?] size of the portrait is what I understood from Mr Huish you wanted.’ [4]

Hubert Herkomer, then ARA, was best known for social realist depictions of poverty and distress in Britain, which chimed with the Dilkes’s political concerns. The intermediary was presumably Marcus B. Huish, director of the Fine Art Society 1879–1911 and editor of the Art Journal, who was no doubt known to both artist and sitter. It is possible that the Dilkes chose to commission Herkomer after seeing his portrait of Miss Katharine Grant (The Woman in White, RA 1885), showing a young woman in evening dress, with a confident, direct gaze. Two other comparable Herkomer works are Entranced (1886–7; see Courtney 1892, p.25) and the undated portrait of Viscountess Ripley (see Pietsch 1901, pl.84).

Behind the portrait of Emilia lay events that add context to the commission. In 1885 Sir Charles was implicated in a sexual scandal that threatened his political position. Emilia responded by announcing their engagement; they married in October and in February 1886 Charles was publicly named in the subsequent divorce case that effectively closed his career. In a suit to clear his name, Emilia defied convention to testify on his behalf, and then lent her support to the informal defence committee, formed in August. Although in March 1887 she told a friend ‘We are flourishing, well and oh! so happy’, [5] the scandal damaged both their reputations, and their social and political lives contracted. Without the scandal, Emilia could have looked forward to a major role as hostess in support of Charles’s parliamentary career – the character in which Herkomer cast her. In the event, Charles lost his seat in the election of 1886. It is therefore likely that the present portrait was commissioned in a spirit of defiance and mutual condolence, perhaps with hope of a reversal of fortune that never came. In other circumstances, too, a picture of this type, emulating the ‘swagger’ aspect of Sargent’s portraiture, would have been sent to the Royal Academy. [6] Instead, the work remained private, never being exhibited or mentioned in the press, nor does it feature in studies of Herkomer. As there is no record of the sitter’s response to the portrait, silence may signify disappointment, either with the likeness or with the forfeited social position it suggests. It hung, however, in her husband’s study along with some of his other treasures, [7] including Joseph Severn’s miniature of Keats (NPG 1605).

Colleen Denney devotes a chapter in her study of women and portraiture in the nineteenth century to analysing the work in relation to its political and personal contexts. Here it is described as

a portrait of Lady Dilke as dutiful wife with a new aristocratic title. But, further, it positions her exclusively as the wife of a man whose reputation had been ruined. Yet, the portrait reflects a self-satisfied Lady, secure in her position in the upper echelons of society. In Herkomer’s portrait Lady Dilke looks slightly bemused [sic] which by all accounts she was in social situations, if not the life of the party. By presenting her against a blank background, Herkomer allows us to focus on her formidable, affable character, one which served her well in the trying times of the divorce trial and its aftermath. While she presents a strong character with a cheerful expression and disposition, Herkomer’s tender treatment of her face shows the lines of worry which she had encountered on her second husband’s behalf. [8]

Further, Denny observes, ‘although formidable and forthright in her intense gaze out at us, there is a slight trembling about the mouth that announces her trials are not far from the surface’. [9] The analysis continues with discussion of the dress portrayed, the apparent contradiction between the sitter’s intellectual achievements and presentation as a Society woman, Herkomer’s portrait practice (‘Although I work rapidly, I carefully consider what I am going to do before and between the sittings’), [10] his portrait ‘gallery of great men’ [11] and his comparable portrait of Katherine Jex-Blake at Girton College, Cambridge, concluding with an extended summary:

[Lady Dilke] knew that she was under public scrutiny and drew on her position as devoted wife to defend her decisions. In Herkomer’s painting, we witness that stance. Art historically speaking, the portrait offers us a rare glimpse of a political wife of the nineteenth century…. Nineteenth-century artists and present-day art historians alike have struggled to find examples of exemplary women, often finding themselves focusing instead on a gallery of beauties. Herkomer, in this portrait, drew on his work in creating a gallery of beauties to generate this painting, but it offers up a woman who is so much more complex than a society beauty. Positioning her as helpmate and political wife who embodies the goodness of the man who chooses her, the portrait reflects the prerogatives [imperatives?] of a visual culture that is unable to disconnect a woman’s identity from that of her husband and how she, in turn, clings to that associative identity and, in the process, becomes an important political instrument for him … Lady Dilke was totally conscious of these issues and manipulated her presentation as an act of survival of a self in crisis … Her image in the hands of artists and journalists was mediated and produced by a cultural episteme that still desired to keep a woman in her proper place, standing by her man, if not, in fact, behind him…[12]

The chapter concludes with Denny’s fictional speech in the sitter’s voice giving guests an autobiographical account while proudly unveiling her portrait in the Dilkes’s residence. [13]

Regarding the work’s acquisition, see NPG 1828 for correspondence from Sir Charles Dilke to Lionel Cust of the National Portrait Gallery concerning portraits of his wife, where Dilke listed ‘a big Herkomer’ among the works he was seeking to bequeath alongside NPG 1828a. No response from Cust is extant, but in 1911 only NPG 1828 and NPG 1828a were delivered from Dilke’s estate, suggesting that at this period a large oil of the sitter was not considered appropriate for the NPG.

Sitter’s husband and widower, Sir Charles Dilke; his heir Gertrude Tuckwell; c. 1919 given in accordance with Charles Dilke’s wishes to Chelsea Public Library; on loan to NPG from Royal Borough of Kensington & Chelsea 1967–1980, when purchased.