1 of 2 portraits by Edward Alcock 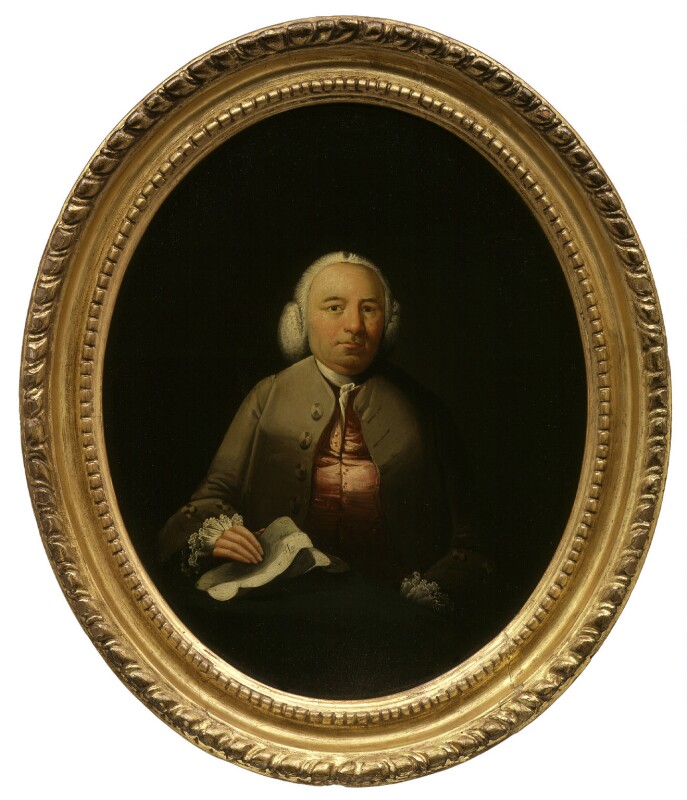 Inscribed in black paint along the top: ROBERT DODSLEY Author of the fables; two manuscript labels on 18th-century paper, removed from the backboard of the frame to the picture dossier, 1924, read: Robt. Dodsley/Author/Dramatic Trifles/Agriculture a Poem,/oeconomy of Life./Editor of/Collect: of Select Poems/-of Select Fables/Etc Etc and, in what may be the same hand: ... Wm, Alcock/of Birmingham 1760.

The provenance of NPG 1436 is known only since 1906 but identity is supported both by the labels of an earlier date on the back of the picture, and by the resemblance to the portrait by Reynolds. Shenstone's letters make no mention of the portrait but he does describe Alcock working on one of himself (NPG 263, see William Shenstone) and his comments suggest that this little-known artist would be quite capable of producing a small work on metal such as NPG 1436 as well as the much larger canvas of Shenstone: 'He finishes highly in miniature ... he paints well in enamel.' [1] In a letter dated 18 October 1761 to Thomas Hull, the Mr Alcock so frequently mentioned in Shenstone's letters is specifically referred to as 'Ned Alcock'. [2] Thus the name on the label should read Edward and not William.
No painter named Alcock is listed in early Birmingham directories but there are signed and dated portraits by Edward Alcock from 1767-9. [3] The only other references to this name are: an Alcock who exhibited two small heads, Royal Academy, 1788; a miniature painter noted by Fuseli in 1825 as active in the second half of the 18th century, resident in Bath and a friend of Chatterton, and an Alcock whose portrait of Lyttelton (see 1st Baron Lyttelton, All Known Portraits) was owned by a Dr Johnstone of Worcester. Lord Lyttelton, at Hagley, near Birmingham, was also a patron of Shenstone whose complaint that 'Alcock is the most volatile of all creatures that have not wings' [4] might indicate that the artist never stayed in Birmingham long enough to get into a directory. Equally, in 1760, he was known to be contemplating moving to Bath. [5]
The use of oil on tin is rare. The only other example of about the same size as NPG 1436 and near this early date, is a good but anonymous copy of Reynolds' portrait of Zachary Mudge, collection Dame Margery Corbett Ashley, 1968. Later, the technique is found in works such as the Raven copies of Millar's Baskerville (q.v., NPG 1394). The date 1760, as given on the label, is acceptable on the apparent age of the sitter, on costume and the known facts of Alcock's career.

Brown eyes, large nose, slightly protruding lower lip, round face, white wig well back on his head; white neck-cloth, brownish-grey coat with matching buttons, open, over a mauve waistcoat; a paper in his right hand is addressed To/D, the rest obscured by his fingers; his left hand is hidden by a table covered with a green cloth; dark green background; lit from top left.

Discoloured varnish; some losses round the edge where the slip has touched the varnish.