3 of 13 portraits of Alfred, Count D'Orsay 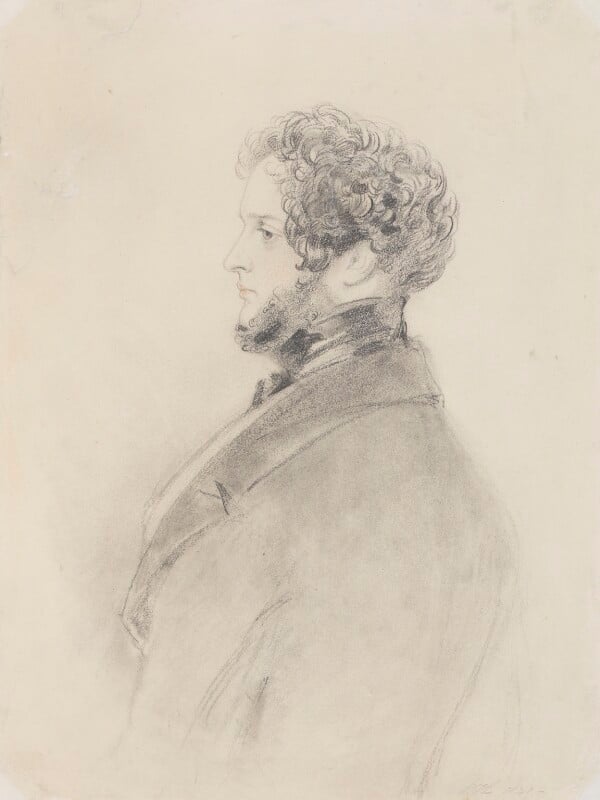 This profile drawing was originally thought to be a self-portrait; it is identical in technique with D'Orsay's other profile portraits, of which there are over 60 in the NPG, but Lane himself was responsible for lithographing over 140 of them, and must have been familiar with D'Orsay's style. It would be extremely difficult to execute a profile self-portrait, and in any case Lane's signature is conclusive. Lane lists the portrait in his 'Account Book' under 6 December 1841: 'Portrait of Ct D'Orsay/from life -/on Paper -'. Two later references in the 'Account Books', II, 51-2, for 15 December 1841 and 12 February 1842, apparently refer to Lane's lithograph of this portrait, which was published J. Mitchell (example in NPG). The NPG drawing was sold with a scrap of autograph: 'My dear Daniell/I send you with pleasure/the profile of your old/friend D'Orsay'. This may refer to the artist, Daniel Maclise, who was friendly with D'Orsay. The NPG portrait may have been the profile drawing of D'Orsay, sold Christie's, 25 January 1879 (lot 512), of which there is a sketch by G. Scharf in his catalogue of the sale (NPG archives).
An earlier profile drawing of D'Orsay by Lane, signed and dated 1833, was lithographed by Lane, published J. Mitchell (example in NPG).

David Pratt; purchased by Professor J. H. Plumb, a trustee of the NPG, and presented by him, 1967.