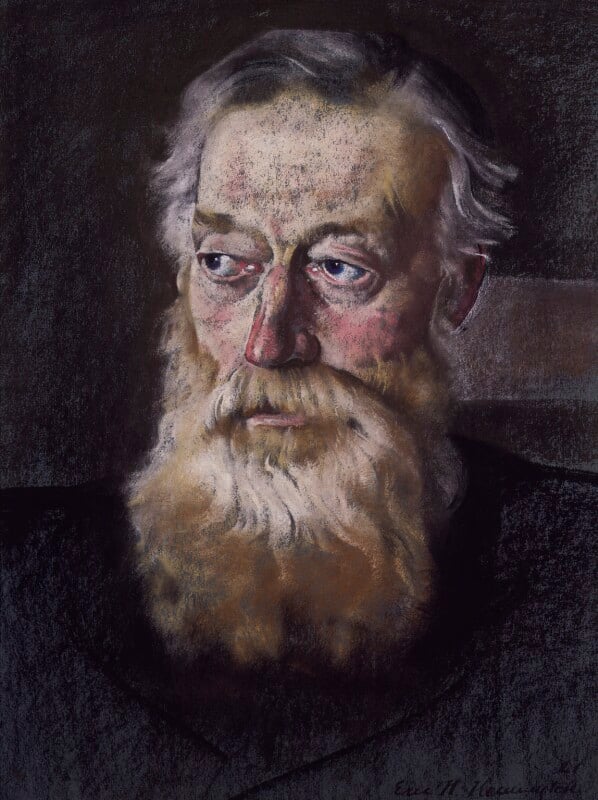 This portrait is linked to the publication of two great pieces of Arabist writing, Doughty’s Travels in Arabia Deserta (1888) and The Seven Pillars of Wisdom by T.E. Lawrence (1926). For Lawrence, Arabia Deserta was ‘a bible of its kind’, a ‘military text-book’ during the Arab campaign against the Ottoman Empire in which he had been engaged. By 1919 he was exploring ways of getting it reprinted on behalf of the elderly author.[1] At the beginning of 1920 Lawrence tried to persuade Doughty to sit to Augustus John for the frontispiece.[2] And in December he contacted Eric Kennington to make a series of portraits of Arabs to illustrate his own book (‘a poor thing without illustrations to help it through’), The Seven Pillars of Wisdom.[3]

Eric Henri Kennington read Arabia Deserta while working on the Arab portraits in 1921, and the idea of drawing Doughty seems to have developed from there. The scheme of sitting to John had come to nothing and there remained a need for a good representative portrait. Lawrence then proposed Kennington to the reclusive Doughty in June 1921.[4]

An artist friend of mine, a young man, Eric Kennington; who made a name for himself in the war by his pictures, has been out beyond Jordan the last three months in Emir Abdullah’s camp drawing Arabs. […] Meanwhile he has been reading Arabia Deserta and he asked me if you would let him made [sic] a drawing of you, while he was still in an Arabian frame of mind. […] He’d probably do it in pastel, rather more than life-size, which is his custom. Sometimes he does it in one sitting, sometimes two: but he would not like to tie himself beforehand, since he prefers to tear up his first effort if it falls short of his wishes. He’s not a cubist, or impressionist: or any sort of -ist. A very straight-forward draughtsman who would accommodate himself as much as he could to what suits you.[5]

The sittings to Kennington took place in Eastbourne at the end of June and in early July 1921.[6] There seems to have been no special rapport between the artist and his sitter, unlike with the portrait of Sir Edmund Allenby (NPG 2906) made in Cairo in March 1921, another Lawrence-sponsored Kennington commission. Nor was the final work much admired by the family:

Mr Kennington has finished the portrait as far as he can, it remains to be seen whether you like it or not. I am afraid none of us like it, though it is most extraordinarily clever and Mr Kennington has been so kind and patient devoting the whole of the morning to try and alter it according to our criticisms but he is so imbued with the strange strongly marked features of the Arabs that it will be some time before he can return to European colouring and softness of touch. […] There is so much that is like my husband, eyes and forehead perfect and the pose of the head; but the colouring is absolutely wrong and I don’t like the measles he has developed! I know quite well that it is only the paper showing through, but my husband has a particularly fine, clear skin. […] I cannot bring myself to say that I like the portrait in spite of the extraordinary likeness. [7]
The good likeness was agreed upon; it tied in well with W.D. Hogarth’s description of the man: ‘tall and strongly, though not heavily, built, with aquiline features and a thick beard which was reddish in early and middle life, Doughty in old age looked the hermit-patriarch of letters for which the world had come to take him’.[8] It was an uncompromising image, however, far removed from his daughter Dorothy’s flattering pastel (see ‘All known portraits, Paintings, drawings, pastels and prints, c.1920’), for instance, and from the 1920s photographs, where he invariably looks old and and frail.

Doughty’s opinion is unrecorded but Lawrence at least was satisfied. ‘I think Kennington did very well,’ he wrote to Doughty. ‘It’s a little too soft perhaps, not in the Orpen sense of being weak, but of not going deep enough. I’ve reserved it for myself, meanwhile, to prevent its being lost sight of. Kennington is unfortunately fashionable, & his work much snapped up. […] It’s very good of you & Mrs Doughty to have given Kennington facilities; I wish the drawing had pleased you: because really it’s a fine thing.’[9] In the end the Medici Society’s 1921 edition of Arabia Deserta contained an introduction by T.E. Lawrence but no frontispiece by Kennington. However, the Doughty portrait received good publicity at the exhibition Arab Portraits by Eric H. Kennington at the Leicester Galleries in London in October 1921, the drawings of Doughty and Allenby attracting special mention.[10]

From early on Lawrence intended the portrait to go to the nation.[11] He gave it to the National Gallery, Millbank (Tate Gallery) in 1922, on condition it was transferred to the National Portrait Gallery on Doughty’s death.[12] When Doughty died in January 1926, the NPG Trustees agreed to waive the Ten-Year Rule and within weeks the portrait was transferred to the NPG, fulfilling Lawrence’s ambition for Doughty’s posthumous reputation.