4 of 31 portraits of John Dryden 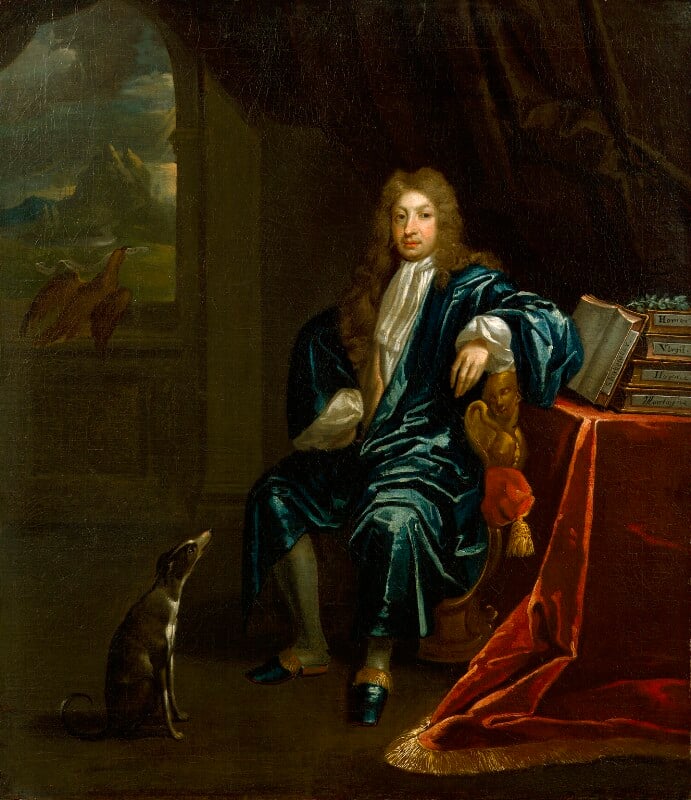 This allusive composition suggests commemoration rather than portraiture. Dryden is casually dressed in an Indian gown and slippers (mules); on the table to the right, beneath a spray of laurel, lie books titled Homer/Virgil/Horace/Montaigne, an open volume of Shakespear leaning against them; on the windowsill an eagle looks up to the sun holding in its beak a scroll inscribed (now almost illegibly): spernit humum fugiente penna (Horace, Odes III, ii, 24); [1] through the window a landscape, plausibly interpreted by Scharf as portraying the twin peaks of Helicon and Parnassus.
According to Vertue writing c.1721, Maubert made at least twenty portraits of British poets ‘from the Earliest to the present time’, some life-size in oval frames, but some ‘painted from the life as Dryden Congreve Pope Wicherly & others’. [2] Piper commented of NPG 1133 in 1968, ‘the small scale and its allusions make it seem probable that it was designed as a library piece’, in which case it may be posthumous; the Horatian tag encourages this idea.
A replica from Strawberry Hill, inscribed on the verso with Maubert’s name, is at Knowsley. [3]

1 The provenance given in a MS label written after 1898 formerly verso, now separately conserved, and see note 3 below.
2 See J. Ingamells, National Portrait Gallery, Mid-Georgian Portraits 1760-1790, 2004, p 369; Wal. Corr., XLII, pp 491-92.
3 The picture was offered to the NPG immediately prior to the sale (Trustees Meeting, 25 February 1861), but declined. The sale was described as comprising ‘the property of the late Grosvenor Charles Bedford Esqr of the Exchequer Whose Family had been connected with that of Sir Robert Walpole, by early private friendship, and subsequent Official Employment from 1700 to 1797’. Lot 38 was described as having a label verso (now untraced): John Dryden, painted from life for Mr Jacob Tonson and presented by his nephew to Mr Grosvenor Bedford probably about 1758, when Mr G Bedford was Deputy-Usher of the Exchequer under Horace Walpole, from 1755 to 1771.