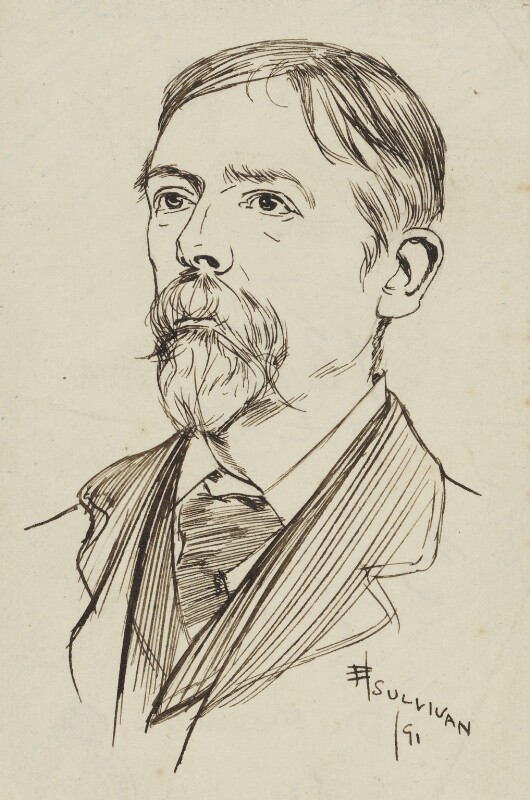 This is one of a set of drawings for ‘Mr Punch’s Jubilee Day: the Present Editorial Staff’, published by the Daily Graphic on 17 July 1891 (p.5), a spread of twelve head-and-shoulders portraits designed to mark Punch’s 50th anniversary. Du Maurier did not pose for this portrait: instead Sullivan worked from a photograph by Alexander Bassano (see ‘All known portraits, Photographs, c.1890–91’). Sullivan’s drawing of Harry Furniss (NPG 2900) for the set was also based on a Bassano photograph.

In 1889 Edmund Joseph Sullivan was one of the new recruits for William Luson Thomas’s immensely ambitious venture the Daily Graphic. He was a fine draughtsman, especially of the human figure, as can be seen even in this reproductive image. He went on to became one of the leading book illustrators of the 1890s–1910s, although his reputation has been eclipsed by Arthur Rackham and Edmund Dulac.[1] For a later work by Sullivan see his drawing of Sir F.S. Maude (NPG 6110).

The drawing was offered to the Gallery together with the drawing of Furniss by Brigadier General A.F.U. Green. He wrote:

They are too good to waste so I send them in the hope that they may be of use to you in your collection of that period. As a matter of interest or curiosity I remember buying them together with a lot of original sketches made for publication in the Graphic, Daily Graphic etc in the early days of photographic reproduction at the flat rate of 9d. apiece.[2]

The two drawings were accepted, given accession numbers and placed in the ‘reference portfolios’.

Head and shoulders to left, looking to left, with thick moustache and goatee beard.