2 of 144 portraits matching these criteria: 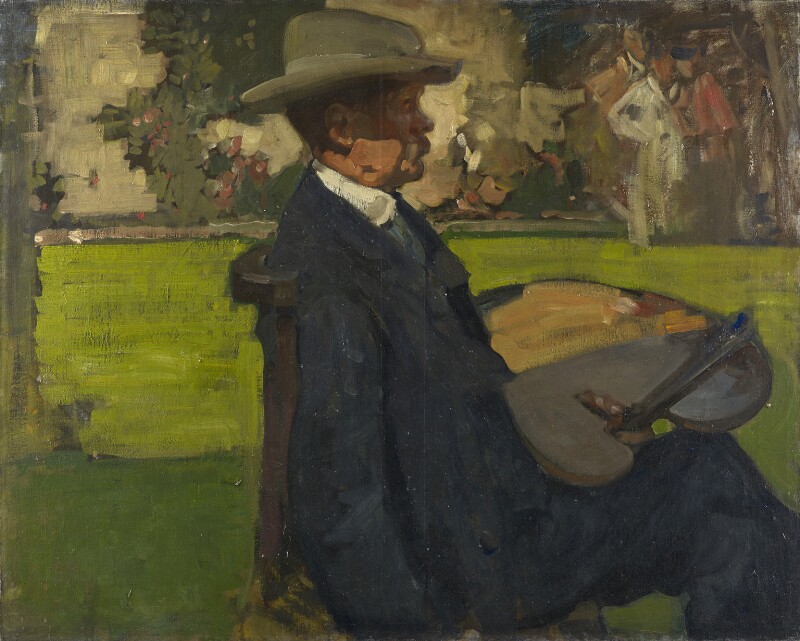 Although twenty-three years older than Frank Brangwyn, East was an early champion of his work, at a time when it was getting mixed reviews from the English press.[1] The two men shared a common talent for plein airiste scenes – East had gone to Japan for the Fine Art Society in 1889, and Brangwyn had been sent by Larkins, another Bond Street gallery, to paint in South Africa in 1891. In 1896 they travelled together to paint in Spain. [2] In 1902, when Brangwyn was struggling with debts, East bought his painting The Cider Press for the large sum of £300. [3]

Brangwyn was not habitually a portraitist; NPG 4826 is undated but displays his technique of the early 1900s and may date to one of the Brangwyns’ visits to St Ives. ‘In January 1904 Frank and Lucy Brangwyn were staying with Alfred East at his house in St Ives (a house where they were regular guests until about 1909) when it was announced that Brangwyn had been elected an associate member of the Royal Academy.’[4] The bold almost abstract brushwork, thick and oily, captures a characteristic profile in strong contrasts of light. East later bequeathed the painting to his eldest daughter Mrs Donald.

A photograph recording the outdoor sitting is in a private collection. In the painting a group of three figures in the top right-hand corner observe Brangwyn paint East painting in a garden. Many years later, in about 1943, Brangwyn made a pen and ink sketch after the photograph and inscribed it ‘FB painting Alfred East in the garden’.[5]

Life-size, three-quarter-length, seated to right in straight-backed seat, profile with hat, against a garden background, group of three figures in top-right corner.