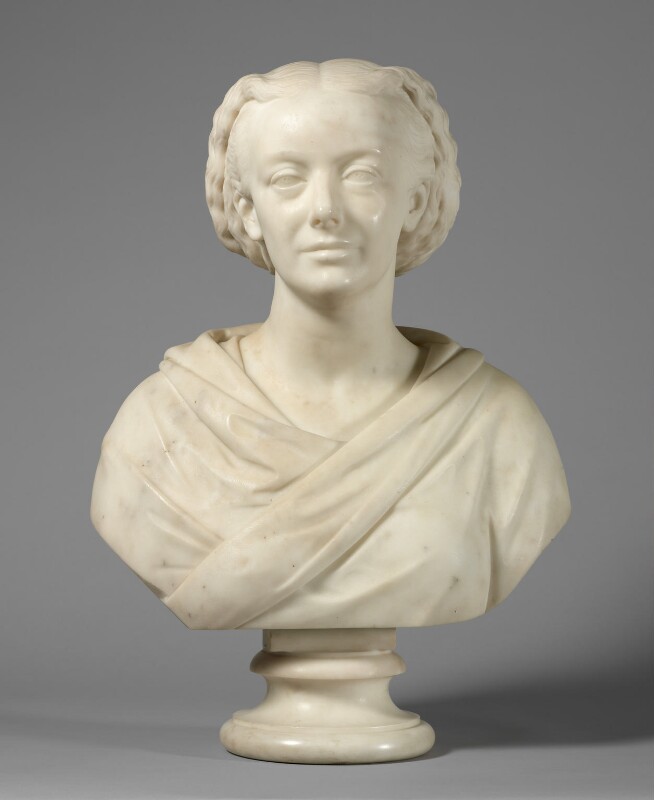 Amelia Edwards visited Italy several times, and this bust by Percival Ball was sculpted in Rome during the winter of 1871–2. It depicts a woman mid-way between youth and maturity (Edwards was 40 in June 1871) with long wavy hair parted in the centre, then looped behind her ears and up behind her head. A very similar hairstyle is seen in an early photograph, tentatively dated to the early 1850s (see ‘All known portraits’). The head is tilted very slightly to the sitter’s right, and the mouth hints at a smile. The shoulders of the bust are conventionally draped. It is expertly carved in very fine white marble.

On a previous visit to Rome in 1857, Edwards had met several artists including sculptors John Gibson and Harriet Hosmer, actor Charlotte Cushman and writer Matilda Hays, before travelling to Florence and Venice. In 1871 she embarked on a European tour, visiting Munich and Oberammergau before arriving in Rome in mid-October. She lodged near the Piazza di Spagna and according to her cousin, writer Matilda Betham-Edwards, she ‘attended the classes of an Italian artist’,[1] a scene indirectly evoked in one of Amelia’s later novels, where the heroine is glimpsed drawing from casts in an art class.

It is possible that the classes Edwards took in Rome were run by British artists and are linked to the bust. Sculptor Percival Ball’s exhibition debut took place at the Royal Academy in 1865, the same year as he was awarded a prize scholarship in the Academy’s Schools. Around 1870 he travelled to Paris, Munich and Rome, where he worked for several years, sending works for exhibition in London before moving to Australia in 1884. In November 1871 he joined painter Edward T. Haynes to run art classes (presumably for English-speaking students and tourists) in the Via degli Avignonesi in Rome.[2] As the classes included modelling as well as drawing from casts and from life, this may have been the location of Ball’s studio, which Edwards is known to have visited this same season. Her signature and home address are in Ball’s visitors’ book beneath those of marine artist Edwin Ellis, poet Mary Howitt and the unidentified Annie Todhunter. A note alongside Edwards’s name, presumably by Ball, reads: ‘English Authoress. Terracotta bust. £50. Settled.’[3] As Edwards was travelling solo, this implies that she commissioned a portrait bust modelled in clay, from which the marble was subsequently worked, probably by professional carvers in Rome. No terracotta version is currently known and it is presumed that the present work was that exhibited by Ball at the RA in 1874. An unrelated note on the same page gives £100 as Ball’s fee for a marble bust.

Curiously, in her notebook recording ‘Reminiscences & Notes of a Tour in Germany, Bavaria, Tyrol & Italy’, Edwards expressed her state of mind while in Rome in the following terms:

As life goes on, one’s heart deadens & wearies from many disappointments, & one ceases to look for heart in others.… I go through the world now as one goes through the Hall of Busts at the Capitol, seeing only heads and looking for hearts no longer. To me my fellow-creatures are busts only.… Whether the bust is that of a good or a bad person, a Christian or a Pagan, a man or a woman, matters nothing. To me it is a work of art only, & so are my fellow creatures. Sometimes I feel as if I also were a mere bust – or worse still, a terminal statue – head above and a marble column below. At other times I am scarcely conscious of even my head, & feel like a shadow moving among shadows – emotionless, passionless, unimpressed.…[4]

From 1864 Edwards’s home was at Westbury-on-Trym near Bristol, where the bust remained until her death in April 1892. According to Edwards’s executors, it dated from 1873. It was delivered to the National Portrait Gallery on 5 November 1892.[5] Her close friend and literary executor Kate Bradbury (later Griffith) requested permission to arrange for two casts of the bust to be made; permission was granted for a mould to be taken but it is not known if casts were then produced;[6] none has yet been located.

A plaster copy of the work was made by the British Museum in 1961 for the Department of Egyptology, University College London and is now in the Petrie Museum of Egyptian Archaeology, UCL.