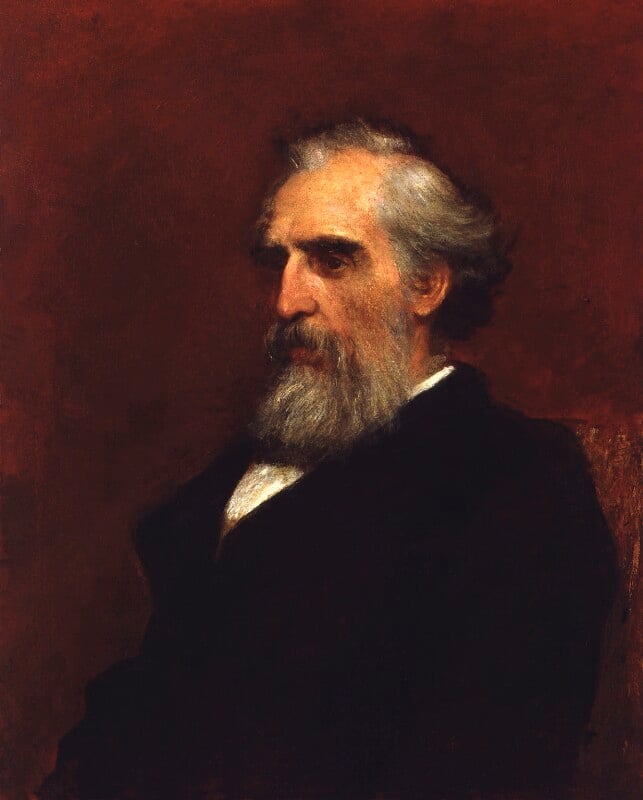 In 1894 Passmore Edwards was over 70, and still proprietor of the Echo, through which he had realized the dream of producing a popular newspaper devoted to public good, and which ‘had become part of his persona’ – a self-image that had expanded to incorporate that of philanthropist. [1] He was a very ready benefactor to many projects with educational and healthcare aims.

George Frederic Watts himself was in his mid-70s. At this stage in his ‘Hall of Fame’ project, he selected a handful of sitters with notable achievements in social reform and the amelioration of poverty; see, for example, the portraits of Samuel Barnett (NPG 2893) and Josephine Butler (NPG 2194). Edwards appears to fall into this relatively small group of Watts’s sitters.

Sitter and artist met through the establishment of the South London Art Gallery in Camberwell, which was funded by Edwards, and where Watts laid the foundation stone in March 1893. A contemporary record states that ‘he expressed his great satisfaction in co-operation with Mr Passmore Edwards in the notable work he was doing in London and elsewhere by multiplying facilities for literary and art enlightenment’. Amongst other things Watts also expressed the hope that the gallery would be used by children, and that ‘with additional facilities like the one they were now about to provide for South London, England’s achievements in art might, in the future, equal those in other directions’. [2]

Unlike other Hall of Fame portraits, very little is known of the execution of NPG 3958. The image is dark, and the thicker paint and varnish layers on head and shoulders create an uneven surface and sheen, which may be due to Watts’s contemporary experiments with oils and varnishes. Late in 1894 he corresponded with art suppliers Winsor & Newton on the subject when requesting a ‘much thinner’ amber varnish. As he explained in letters that also reveal his technical aims:

I want to be able to use it on pictures in the course of production. I use the pigments very stiff as you send them to me [word missing] when too difficult to drive on the canvas with a little petroleum, the work soon becomes quite dry but of course not very hard, and is too dull and lustreless to enable me to be sure of my effects … oil produces [a] greasy surface which is fatal to the crisp touch I desire, the Amber Varnish should give me the surface I require if it could be made so liquid that there could be no danger of its by a rapid drying cracking the not hard pigment underneath [3]

When Winsor & Newton’s chief chemist replied that such a varnish would require a large proportion of volatile dilutent, which would lead to cracking if applied over an already painted surface (adding ‘I don’t think that was the way Van Eyck went about it’), Watts accepted the reasoning, saying he simply wanted ‘to get rid of the oily effect as much as possible safely’. [4]

Such aspirations, together with subsequent varnish treatments, may be responsible for the present condition of the painting. A photograph showing its original state [5] suggests that the work has darkened over time, thereby obscuring Edwards’s characteristic fly-away hair and beard, visible in contemporary photographs, which gave greater liveliness to the portrayal than it now possesses. The result is one of Watts’s less successful portraits, showing Edwards seemingly sunk in lugubrious meditation.

When exhibited in 1894, the portrait received somewhat perfunctory praise from M.H. Spielmann, who after longer remarks on works by Sargent, Lavery, Solomon J. Solomon and others, wrote:

Two portraits, both noble heads, come from Mr G.F. Watts. The first is that of Mr Passmore Edwards, the philanthropist, who devotes all his profits from his paper the Echo to the establishment of libraries, schools, hospitals and so forth; the second that of the late Sir Andrew Clark. Both are fine works – the latter, I think, the more pleasing of the two in colour; the former, in likeness. They prove that Mr Watts’s skill has not abated; and it is a satisfaction to know that, through the generosity of the painter, they are to become the property of the nation. [6]

In 1955, the portrait was still housed at the Watts Gallery, Compton, together with six others including those of Charles Booth (NPG 4131), Flinders Petrie (NPG 3959) and Claude Montefiore. In October of that year, the Trustees accepted the portraits of Edwards and Petrie, postponing decision on the others.

A copy of the work believed to be by Watts and given by him to Edwards is in the collection of Truro City Council, Cornwall, PCF10. [7]