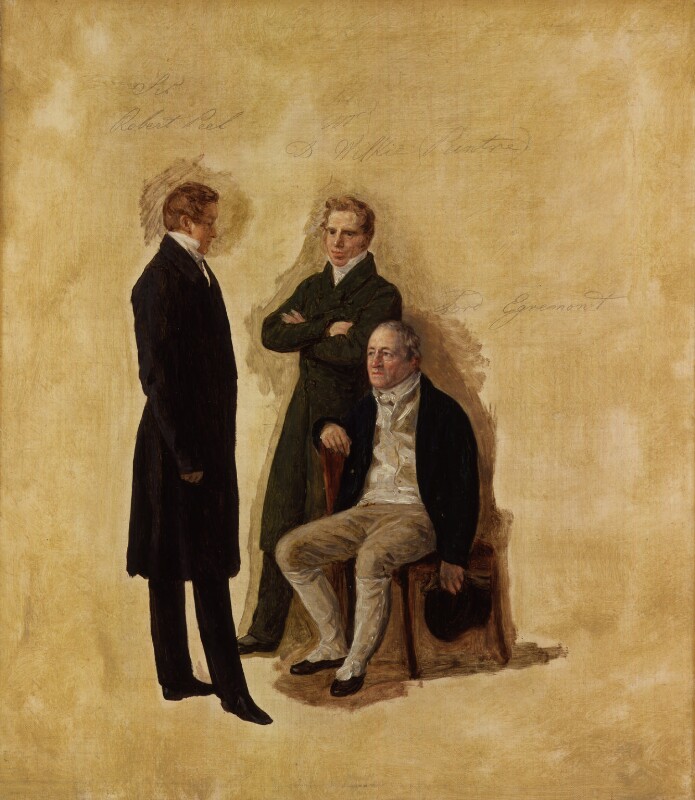 Inscribed in pencil above their respective heads: Sir/Robert Peel, Sir/Mr/D. Wilkie (Peintre), Lord Egremont.
Old labels on the back indicate their relative positions.

The four groups (NPG 792-5) are preliminary studies for a large picture of an imaginary gallery hung with pictures from famous collections in England. The idea was conceived by General Sir John Murray who already owned a similar picture by Gonzalez Coques, probably a version of the famous Coques Picture Gallery in the Mauritshuis, of which a variant is at Windsor Castle and others were well-known at the time. Lord Egremont owned one by Teniers, of the Archduke Leopold's Gallery. Murray commissioned Pieter Wonder to paint its English companion with the collectors grouped in the foreground and about 40 well-known Old Masters hanging on the walls. Pieter Wonder came over from Holland in about 1822 under Murray's aegis and exhibited in London 1823-31, his last work being at the British Institution 1831 (345) - 'An Interior of a Picture Gallery with Portraits 5ft 7in x 7ft 4in', presumably the finished work for which the groups are studies.
In the 'Imaginary Gallery' Peel, Wilkie and Egremont are grouped beside an easel with The Madonna of the Basket by Correggio, bought for the National Gallery in 1825 (NG 23). Peel, a well-known collector of the time and Home Secretary, has the Chapeau de Paille by Rubens hanging prominently to the right. A substantial part of his collection was bought by the National Gallery in 1871 and a large heirloom sale was held by Robinson and Foster in May 1900.
Apart from Wonder, Wilkie is the only artist represented in the groups. His work is not shown by Wonder but his Breakfast Table was one of Lord Stafford's favourite pictures. His Village Festival was acquired by the National Gallery with the Angerstein pictures in 1824 (NG (Tate) 122) and The Blind Fiddler was presented by Sir George Beaumont to the British Museum in 1826 (Tate 99). Wilkie expressed his delight at being included among the 'Patrons and Lovers of Art':

I shall be very happy to accede to the request that your Ladyship makes to sit for a portrait to Mr Wonder, and particularly that it was the wish of the late Sir John Murray that I should have a place in the picture he is painting - if it is convenient for Mr Wonder I shall propose Monday next at 3 o'clock.
(MS letter to Lady Murray, dated 30 June 1830 in private collection Dorset.)
Lord Egremont sits in the centre of the 'Imaginary Gallery' beside the easel. His large picture at Petworth by Teniers, The Archduke Leopold's Gallery, together with his friendship with General Murray probably inspired Murray to commission Wonder to paint his own 'Imaginary Gallery'.
The finished picture was never seen by General Murray who died abroad in 1827. His widow however had its interests at heart, arranged for sittings with Wonder for the various collectors, and furthered its progress until its completion in 1830 (it is signed and dated: P. C Wonder/1830). She bequeathed it to a friend of the Murray family, Mrs Juliana Crutchley, whose descendant still possesses it.
The four groups were probably the last to be painted though they may have been worked on as opportunities arose for sittings between 1826 and 1830. The first (NPG 792) is the most complete of the four and the portrait of Murray himself was either painted from life or adapted from a similar portrait of him in army uniform playing chess with his adopted daughter, Ellen Adderley (reproduced J. W. Niemeijer, 'P. C. Wonder in Engeland' in Bulletin van het Rjksmuseum, 1965, plate 9). Ellen married Arthur Viscount Dillon in 1843. As a girl she took a great deal of interest in the progress of the picture and was the recipient of a charming, if illiterate, letter from Wonder headed by a sketch of the artist painting it and being reproved by the angry young Ellen for not answering her letters (copy by Scharf in NPG archive). Unfortunately the letter is not dated but he tells her that he still has fourteen more pictures to copy and the two statues before he can put in the figures. This is confirmed by Wonder's own description of the finished picture in a catalogue owned by the family:

Dans le Stafford Galerie j'ai copié 13 tableaux mais il n'y a en a que 6 que l'on peut voir entièrement ... London July 15 1829.
(Letter from General Crutchley to Scharf in NPG archive.)
Wilkie's letter to Lady Murray, dated 30 June 1830, shows that sittings were still taking place during the summer. The final picture, clearly dated 1830, was probably finished towards the end of the year and ready for exhibition at the British Institution early in 1831 (Literary Gazette, 29 January 1831, p 75, and 19 February 1831, p 123).
Wonder thoughtfully made a rough key to the picture with the names of the artists, and also drew a pen and ink copy now in the Rijksprentenkabinet, Amsterdam (reproduced J. W. Niemeijer, 'P. C. Wonder in Engeland' in Bulletin van het Rjksmuseum, 1965, plate 1). The four groups (NPG 792-5) are spaced out in the foreground. Behind the bust of Pope lurk two more figures, unidentified but possibly Sir George Beaumont (d. 1827) and Lady Murray's father Lord Mulgrave, both well-known patrons and lovers of art.
Several attempts have been made to identify the gallery which is a high rectangular room with a black and white marble floor, Corinthian columns supporting a heavily decorated coffered roof with amorini in the lunettes and along the wainscoting. A view through the open door shows a balustrade (perhaps of Buckingham House), St James's Park and Hawksmoor's towers of Westminster Abbey. Angerstein's house in Pall Mall, General Murray's house in Westminster, Cleveland House and Stafford House both in St James's, have been suggested but none can be sustained and it was probably a totally imaginary gallery designed to match the picture by Gonzalez Coques for which Murray wished a companion. Wonder possibly enlisted the help of an architect friend, Christiaan Kramm, to concoct the gallery for him. He certainly copied the pictures himself, either in his own studio in Soho or in the Stafford Gallery or the British Institution. They are all painted with great accuracy and many can be easily recognised. The most celebrated is Raphael's Alva Madonna, then on the London art market and bought shortly afterwards for the Hermitage, St Petersburg (Leningrad) where it still is. The Orleans collection is strongly represented by pictures then in Cleveland House and Stafford House, and the Grosvenor pictures also figure prominently. Works belonging to George Watson Taylor, Holwell-Carr, Murray himself; and other collectors can be readily identified. Wilkie, apart from Wonder himself, the only artist represented, appears to have no picture on the walls but his Breakfast Table was looked on by its owner, Lord Stafford, as equal to any of the Old Masters and indeed forms the frontispiece to volume II of the Stafford Gallery Catalogue of 1825.