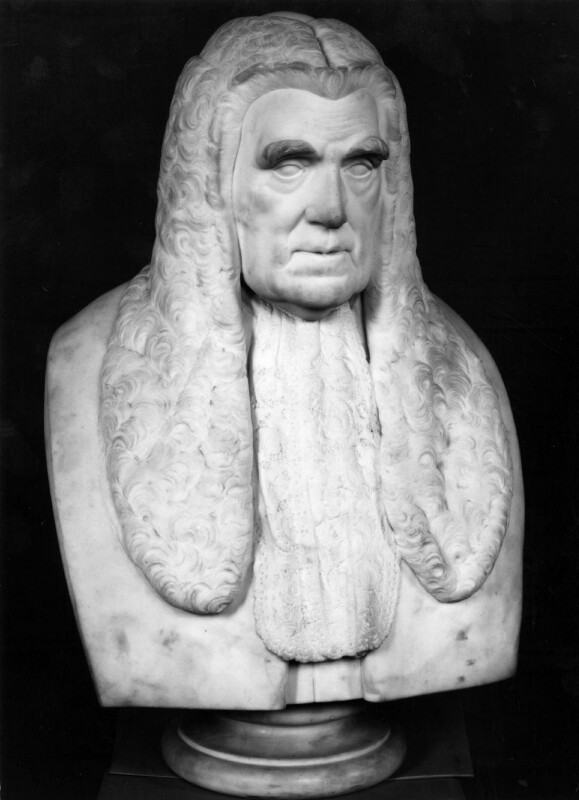 In 1829 Charles Francis, an admirer of Eldon's conservative anti-Catholicism, founded the Eldon School at Vauxhall and asked Lord Eldon to give sittings to Tatham for a bust. Three letters from Eldon to Francis relating to the sittings and the school itself are in the NPG archive dated December 1829 to June 1830. The second letter refers to a proposed statue for the school and answers Tatham's query as to how the statue should be dressed. '... I am now not well – but well enough, I hope, to be able in a day or two, to see Mr Tatham to whom I shall write. There seems a general opinion that an Ex Chancellor in 1830 cannot be cloathed in Representation of the Robes which were removed from his shoulders in 1827 - but that he may, if you should approve that, appear in his Earl's Robes'.
The statue is mentioned as being in a niche on the principal front of the school in Horace Twiss's Life of Lord Chancellor Eldon, 1844, III, p 93, and a GLC photograph shows it still there in June 1906; the building was demolished in about 1908 and the statue has disappeared.
When the bust was under consideration by the Trustees, Lord Eustace Cecil was asked for his opinion and in a letter to the Chairman he compared it to the bust by Behnes then in Hamilton Place. '… yours I think loses nothing by comparison. The likeness as far as my poor judgement is worth anything, is exceedingly good - but there is certainly more flesh about the face - the cheekbones are less prominent and the eyebrows are perhaps a trifle more prominent. Half a dozen years at this time of life would probably have effected all this, especially as we know that after he resigned office he aged very rapidly' (letter to Lord Stanhope 22 June 1864 in NPG archive). Another bust by Tatham, in short wig, at Lincoln's Inn, is probably that exhibited RA 1832 (1133).

Commissioned by Charles Francis and sold by his son Alfred Francis to the NPG in 1864.