10 of 26 portraits by Edmond Xavier Kapp 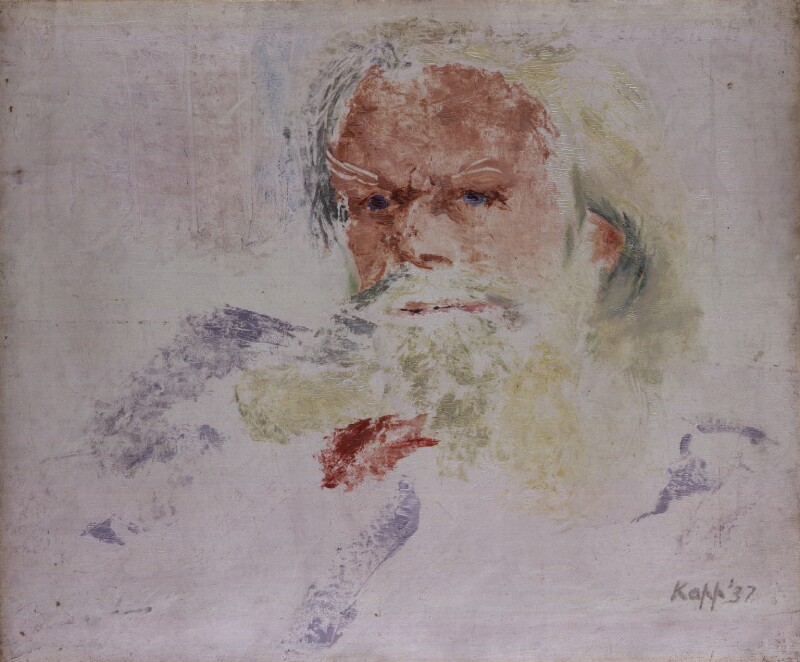 This impressionistic oil sketch is painted on a thick white gesso ground, using a narrow palette knife to lay the colours, with some scoring out, notably on the eyebrows. Forehead, eyes and nose are most clearly delineated, the rest being roughly indicated, with grey-green for hair and whiskers, blue for jacket and shadows, and a smear of red for the tie.

In 1937, Havelock Ellis was 78 years old, and in declining health. Although he was socially reclusive, his reputation as a ‘sexologist’ remained high, owing to his multi-volume Studies in the Psychology of Sex (1897–1910), of which an additional seventh volume appeared in 1928, and the textbook The Psychology of Sex (1933). In this year he and his partner Françoise Lafitte-Cyon were still living in a cottage in Sussex, and Ellis was feeling weak: ‘I just sit in front of the fire, not inclined to do anything,’ he wrote. ‘As one gets old one hasn’t the reserve of strength to recover properly from the blows which even a slight illness gives.’[1] The small scale and swift execution of this work may indicate that the artist carried his prepared materials to Ellis’s home, although as Kapp also drew a charcoal study of Ellis, presumably on the same occasion (see ‘All known portraits, Paintings, drawings, sculptures and prints, 1937’), it is possible that the present work was executed afterwards in the artist’s studio.

Edmond Xavier Kapp, who had his first solo show in 1919, was best known for caricatures, often drawn with a nervous or ‘dancing’ line, seen for example in his 1940 portrait of W.R. Sickert (NPG 3547), which the flat, dabbing strokes here resemble. He resisted the term ‘caricaturist’, however, and declared that he had ‘never made a drawing of anyone except from life’. [2] It is argued that he ‘intended his character portraits to be visualisations of personality’ combining a visual account of the sitter with the artist’s mental response to the sitter. [3] Kapp sought sitters of intellectual ability and professional success, but it is not known exactly what prompted him to portray Ellis, nor why he chose the unusual (for Kapp) medium of oil paint.

Twenty-three of Kapp’s works are in the National Portrait Gallery collection, including ten portraits of delegates to the League of Nations in the 1930s; others are in the British Museum and Imperial War Museum, London. A total of 243 portraits and caricatures are in the Barber Institute, University of Birmingham.

The artist; bought c.1975 by Phyllis Grosskurth, from whom purchased 1979.