41 of 872 portraits matching these criteria: 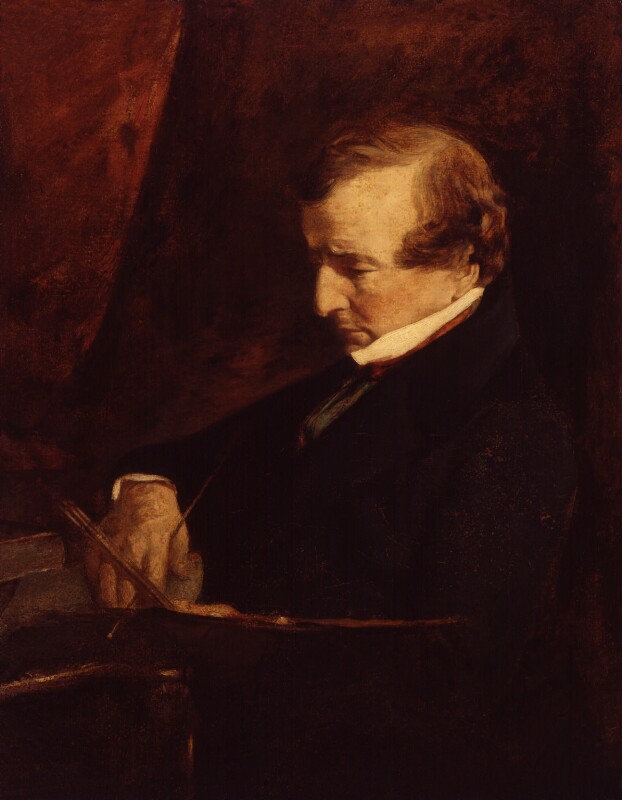 Inscribed on the back in ink in a 19th century hand: Portrait of W. Etty R.A
Also on the back of the portrait is a letter from the artist James Linton to Billington of 17 July 1890, stating that the picture is 'a portrait of "William Etty" by himself & a very beautiful example of his work'.

This painting is almost identical in size, composition and details, to one in the York Art Gallery, reproduced York Catalogue, plate 64, both previously described as self-portraits. They are, however, of poor quality, and their entire dependence on the Hill and Adamson calotype photograph (examples in NPG, British Museum, Scottish NPG and elsewhere) suggests the work of a copyist [1]; a variant photograph by Hill and Adamson, evidently done at the same sitting, shows Etty in a slightly different posture, and differs in several slight details. Both photographs are reproduced by Schwarz in the Art Quarterly, figures 2-3, who suggests that they were taken in October 1844. The head, from the photograph on which the NPG portrait is based, was etched in reverse by S. J. B. Haydon (example in NPG), and reproduced as a woodcut, also in reverse, Art Journal (1849), p 13.

1) The differences between the paintings and the photograph are negligible, and can almost entirely be accounted for by the differences in technique. Although Farr includes both the paintings in his catalogue of Etty's work, he expresses doubt about their status. Either the NPG or York version may have been the painting in the William Cox sale, Robinson and Fisher, 14 March 1883 (lot 146); a slight sketch in Scharf's sale catalogue (NPG library) shows what appears to be the same composition. No details of size are, however, given in the catalogue.

1 There is a letter from Billington of 4 February 1903 offering the portrait to the NPG trustees (NPG archives); he states that he purchased it some twenty-five years earlier, but does not state from what source.