1 of 5 portraits of Sir George Everest 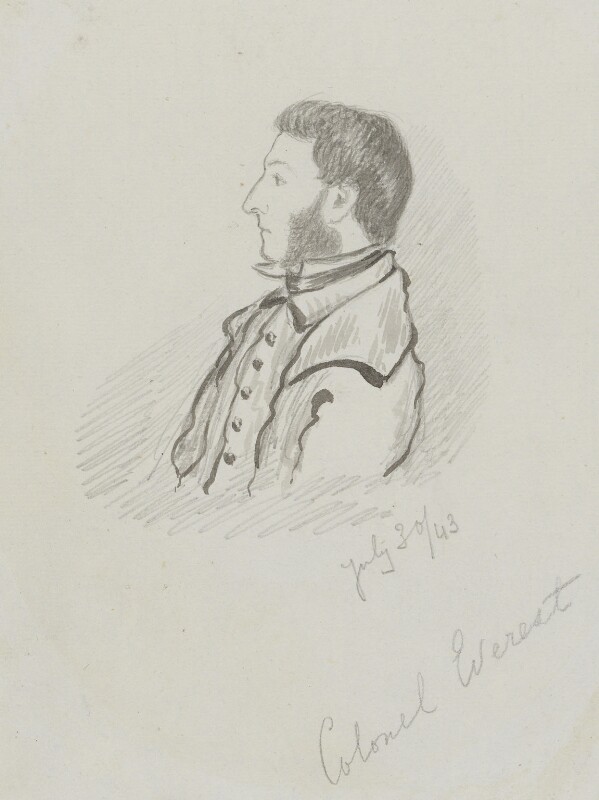 Inscribed in pencil (lower right): July 30/43 and below: Colonel Everest.

The donor wrote about this portrait (letter of 12 July 1932, NPG archives):

'The history of this pencil sketch is peculiar & I think interesting. It was taken on July 30th 1843, by a British Officer of the Army, who was a mutual friend of my father, the late Lord Lawrence (then Governor General of India), and the late Colonel Bontein. It passed into the possession of Col Bontein, who was fond of collecting momentos etc, and afterwards into the possession of his son the late Mr J. S. Bontein, whose daughter I married, & was ultimately handed over to us 40 years ago, or upwards.'
Colonel Bontein was personal assistant to Everest at Dehra Dun from 1838-42 [1]; they both had houses at Mussorie in 1843, where this drawing was probably executed. Although Tayler was in the Bengal Civil Service, and not in the army, which contradicts the evidence of the donor, the attribution to him seems plausible. It was first suggested by Percy Macqueen of the Madras Record Office in a letter of 19 January 1933 (NPG archives). Tayler was in India from 1829-43, and did several similar portrait drawings in profile, which are close in style to the NPG drawing. [2]