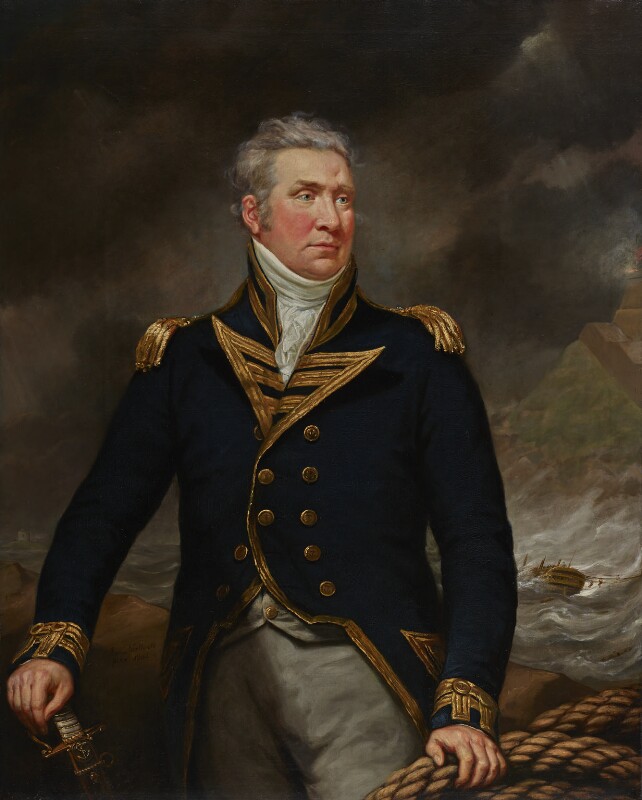 The portrait is first recorded in James Northcote’s list of paintings, p 25 - 'Sir Edward Pellew Bart. paid at first sitting a Ten pound Bank Note since June 1804 paid the whole for this picture'. Pellew was promoted Rear-Admiral 23 April 1804 and sailed for his appointment as C-in-C. East Indies shortly afterwards.
According to a letter from his son, the Dean of Norwich, it was painted by Northcote 'in the summer of 1804, just before my Father sailed to take the Naval Command in India. The costume is the full dress of a rear-admiral of that date. The sketch at the back of the picture represents the wreck of the Dutton East Indianian, then employed to convey the 2nd or Queens Regiment to the West Indies, under the Citadel at Plymouth when my Father was instrumental in saving the lives of many of the Troops and crew. It was presented to me by my Father in 1830, three years before his death, and has never been out of his house or mine until now' (letter of 24 January 1862 in NPG archive).
The wreck of the Dutton is described in Edward Osler, Life of Admiral Viscount Exmouth, 1835, pp 115-20 and C. N. Parkinson, Edward Pellew, Viscount Exmouth, Admiral of the Red, 1934, pp 132-5. It took place during a storm in January 1796 when Pellew was still Post Captain and was presumably used as a backround to commemorate an event of which the Admiral had every reason to be proud.
A copy, 'Sir Edward Pellew and the Shipwreck', noted in Stephen Gwynn, Memorials of an Eighteenth Century Painter, 1898, p 286 under the year 1823, is not mentioned in James Northcote’s list of paintings.

Given in 1830 by Lord Exmouth to his third son George Pellew and by him given to the NPG in 1862.