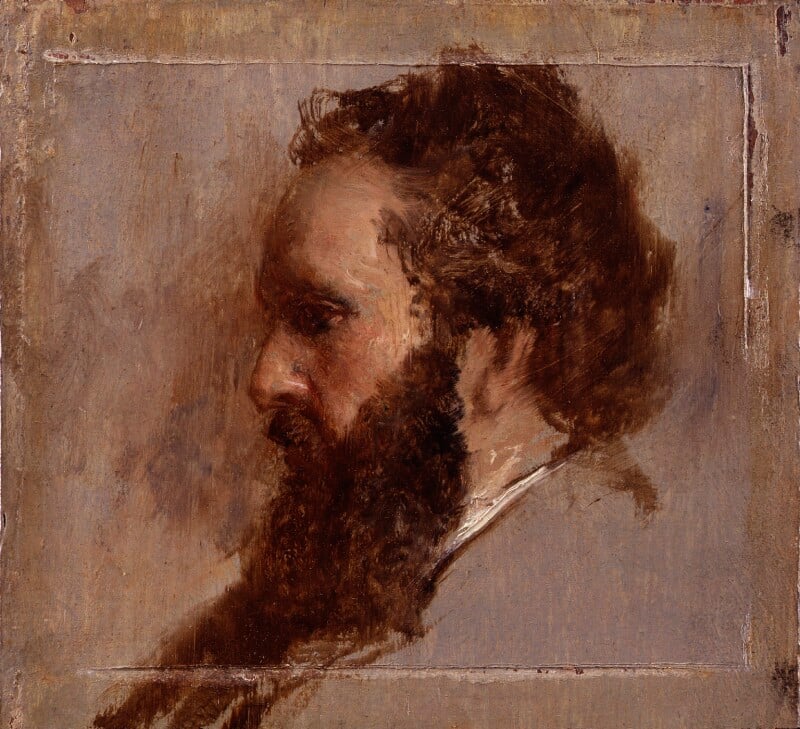 Sitter and artist were youthful companions in an Edinburgh sketching club called the Smashers’ Club, launched in 1848, which reconvened in London in the 1860s, when Douglas was an occasional visitor. [1] In the earlier period, Douglas exhibited a half-length portrait of Faed at the Royal Scottish Academy (RSA), [2] now in the National Galleries of Scotland collection (see ‘All known portraits, By other artists, exh. 1851’). As a very small oil sketch, NPG 4840 is quite different in manner. Comparison of the sitter’s beard and hairline indicate that it was painted between 1884, when the sitter retained a clean-shaven chin amidst bushy whiskers, and 1887, when he had a full, greying beard, as shown in John Pettie’s two portraits, the second depicting Faed in a similar profile view (see ‘All known portraits, By other artists, 1884’ and ‘1887’).

William Fettes Douglas, chiefly known for meticulously researched and carefully finished historical subjects, was based in Scotland throughout his career, becoming president of the RSA in 1882.

Despite the wording on one old label, the sitter is not Douglas, so it is presumed that the labeller reversed the identities.[3]

The old printed label on the reverse, apparently cut from a catalogue, indicates exhibition at an as yet unidentified date and location.