18 of 389 portraits matching these criteria: 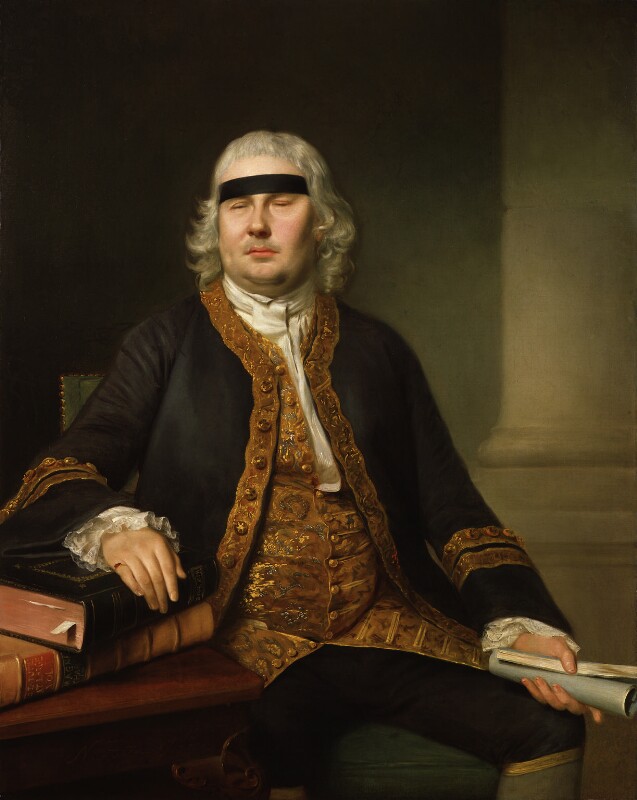 The earlier history of NPG 5515 is not completely established, but it was presumably the portrait exhibited by Hone in 1762. By 1866 it belonged to the Royal Female Orphanage, a charity originally founded in Lambeth (as the Female Orphan Asylum) by Fielding in 1758, when he became a governor of the Magdalen Hospital. The pamphlet in his hand probably refers to his Account of the Origin and Effects of a Police ..., published in 1758, which had appended a first plan for the rescue of ‘deserted girls’. NPG 5515 also celebrated Fielding’s knighthood, an honour he had solicited in 1757, and received from the King on 1 October 1761. [1]

White hair, a dark blue band above his sightless eyes; he wears a white collar and neckcloth, a blue-grey coat with gold trim, a gold embroidered waistcoat, black breeches and white stockings; he holds a light-blue-covered pamphlet in his left hand and there is a ruby ring on the little finger of his right hand; the chair is green; on the table a black leather-bound book lettered in gold HOLY BIBLE and a calf-bound book lettered in gold in a red panel STATUTES/AT LARGE/VOL.1/ and in a green panel MAGNA CHARTA HENR.

1 Where the portrait was noticed by H. F. B. Compston, The Magdalen Hospital, 1917, p 41.
2 On his eightieth birthday, a number of Bell’s friends had given him a sum of money to acquire a work of art to be presented to a gallery of his choice. Bell had been a Trustee of the NPG 1910-40.

1 McArdell died in 1765; his print differs only in the placing of the titles on the books, and in the added words Plan of to the scroll.