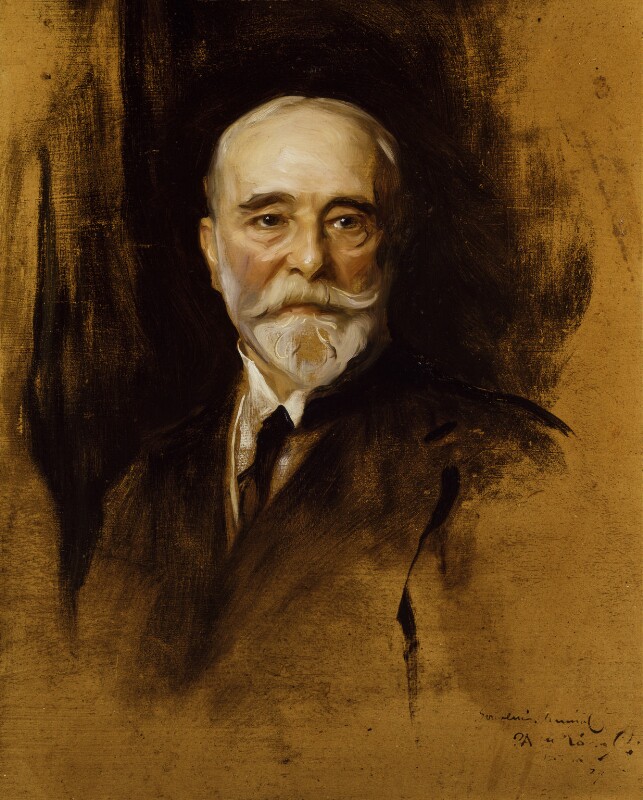 According to Fildes’s son, sitter and artist first met at the spa of Kissingen in 1909 and the portrait was conceived as part of a ‘pact that Fildes and László should paint each other’.[1] The first and probably only sitting took place in summer 1914 at de László’s London studio on Campden Hill; Fildes’s son Luke Val, then in his mid-thirties, was also present and later recalled:

I was interested to see how de László set about a clean canvas. He attacked with even greater assurance than my father, in the sense that he seemed to get his effect at the first attempt – alla prima – or, putting it the other way round, the effect he got at the first attempt seemed to be what he wanted. He made an admirable likeness of my father, if one concedes a bit more twist to the moustache and a bit more sparkle in the eye than were true to life.[2]

A comparable account was given by the sitter’s granddaughter:

The family legend has it that it was painted in a couple of hours, but although it is certainly a piece of bravura painting, my father thought it was far more like him [Sir Luke] than the self-portrait. It … is in a rather nice plain frame that my father had made for it.’[3]

De László famously worked swiftly and directly, without revisions. Painted on hardboard, the work is highly varnished, giving a gloss finish. With economy of means, leaving much of the support unpainted, and with de László’s typically stylish brushwork, it presents Fildes as an urbane and successful gentleman. Both artist and sitter, incidentally, sported similar exuberant moustaches.

Hungarian-born Philip Alexius de László settled in London in 1907, becoming a leading painter of society and royal sitters. The National Portrait Gallery collection contains fourteen of his oil portraits. During the First World War, he was arrested in autumn 1917 as a suspected enemy alien, despite holding British citizenship. When his case was first heard on 28 September 1917, Fildes was a witness on de László’s behalf; this is the date later inscribed on the work, with the words ‘Souvenir Amical’ to thank the sitter for his support.[4] Despite the intervention of Fildes and others, de László was nevertheless interned.[5] Owing to the outbreak of war, Fildes’s side of the mutual portrait agreement was never implemented.

in frame selected by sitter's son