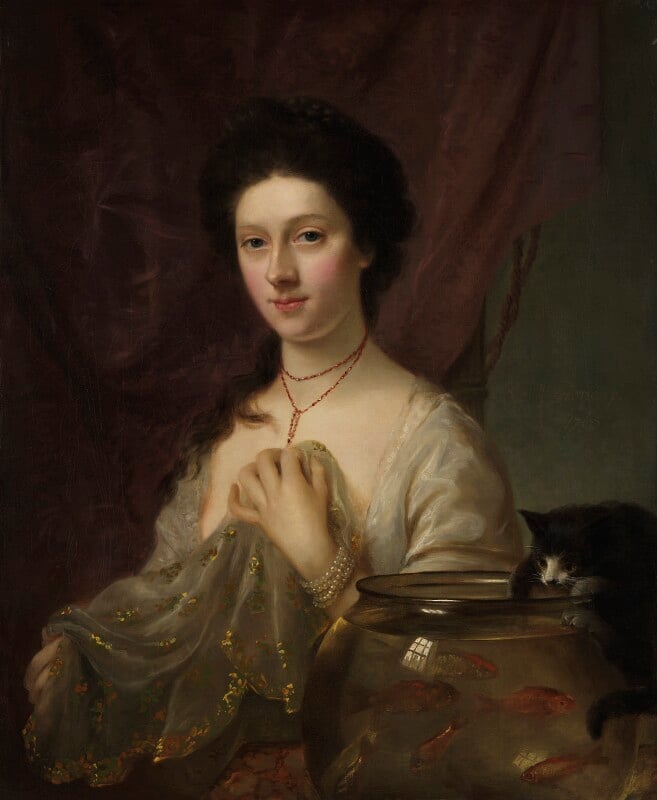 Signed and dated in yellow script: N Hone pt./1765.
The remains of two labels on the top and centre bars of the stretcher read: 8th December 1913, and [P]ortrait of Kitt.../...Hone; another removed from the back of the canvas, in Dr Cock's hand (c.1913? see provenance): Kitty Fisher painted/by Nathaniel Hone 1765./She married Mr Norris M P/of Hemsted Park, Benenden/Kent. died four months/afterwards of small pox at/Bath. Buried in her best dress/in the family vault in Benenden/Church 1767. F. William Cock m.d.

No other version of NPG 2354 is known. It may well be the portrait exhibited by the artist in 1765: 'This is a portrait of a Lady, whose charms are well known to the town. The Painter has ingeniously attempted to acquaint us with her name by a rebus upon Canvass. By her side a Kitten (Kitty) is attempting to get into a basin of Gold Fish (Kitty Fisher) - what a pity it is he did not make the Rebus complete and according to Subtle in the "Alchemist", place on the other side a Dog snarling - er - Kitty Fish - er!' [1]

1) The Public Advertiser, 10 May 1765, cited in Notes & Queries, CXLVIII, 21 March 1925, p 204, by Horace Blackley. I am grateful to Miss Wimbush who suggests that the reference to The Alchemist occurs in Act II, Scene VI, in which Subtle completes a sign for ‘Able Drugger' with a dog to symbolize 'er'.

Dark blue eyes, dark brown hair dressed high and parted in the centre, loose curls falling to her right shoulder, rather pale complexion, the cheeks perhaps lightly rouged; oyster-grey low cut dress, embroidered fichu held in her left hand partly covers the pendant of her coral necklace, rows of pearls on her left wrist; pale mauve drapery behind her head and, right foreground, a black cat fishing in a bowl of goldfish, plain blue background behind; lit from the left.

Received, 1929, by bequest, with a portrait of Lady Elizabeth Foster (NPG 2355) from Lord Revelstoke; the portrait, according to a letter dated 11 July 1929 from Dr F. W. Cock of Ashford, Kent, was believed to have been acquired by purchase from the collection of Captain Robertson-Aikman [1] 'in the early part of the nineteenth century'; at his death it was bought by his son who bequeathed it to his sister who, in turn, left it to her physician Dr Cock; brought, 1913, by Dr Cock to the Gallery for identification; bought from him by Lord Revelstoke.

Probably Society of Artists, 1765 (54), where a portrait of a lady by Hone was identified by Walpole as Kitty Fisher with a cat and goldfish; [1] also ‘Allan Ramsay: His Masters and Rivals', National Gallery of Scotland, 1963 (86).