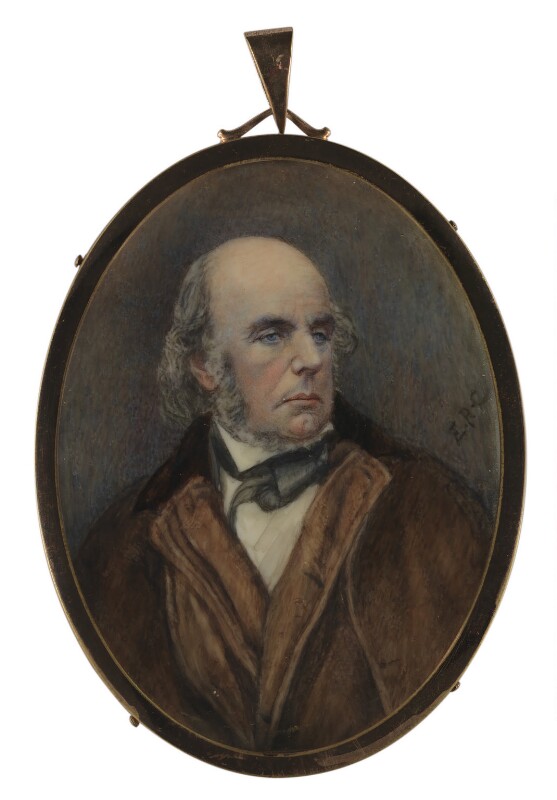 This miniature is based on one of three photographs taken by Cade and Whiten of Ipswich in 1873. FitzGerald wrote about them to Mrs Browne on 17 November 1873:

'The Artist always makes three views; but I couldn't face the light of the Machine, so my lovely full face was all blurred: and only a side face, and a looking down one, came out. They are so good-looking (comparatively) that upon my honour I shd never have guessed they were meant for me; and I really do not believe that any one else would.' [1]
There is an anonymous engraving after the 'side face' photograph (used by Lady Rivett-Carnac), and another, after the 'looking down one', was published R. Bentley, 1895 (examples in NPG). The latter was also engraved for the Letters and Literary Remains of Edward FitzGerald, edited W. A. Wright (1903-7), I, frontispiece. Mrs Orr was the great-granddaughter of George Crabbe the poet, and the niece of the Rev George Crabbe, in whose home FitzGerald died. Lady Rivett-Carnac was the daughter of James Orr, and the wife of Sir George Rivett-Carnac, 6th Bart, whose first wife was Emily, daughter of the Rev George Crabbe [2]. Mrs Orr wrote about the miniature (letter of 9 March 1903, NPG archives):

'E. F. G. never had his miniature painted from life - but Mrs Rivett-Carnac had her aunt Miss Mary Crabbe to help her in her work by describing exactly his colouring & expression and I do think it is well done and a perfect likeness.'
Miss Mary Crabbe, of Brighton, also provided the photograph from which the miniature is copied.

1) From an unpublished letter in the possession of Peter Kenworthy Browne, quoted in F. Miles, 'Samuel Laurence' (typescript copy, NPG library).
2) Information provided by Mrs Orr in an interview at the NPG, 2 March 1903. She does not state her exact relationship to Lady Rivett-Carnac or to Miss Mary Crabbe.