1 of 2 portraits of Thomas Alphonso Hayley 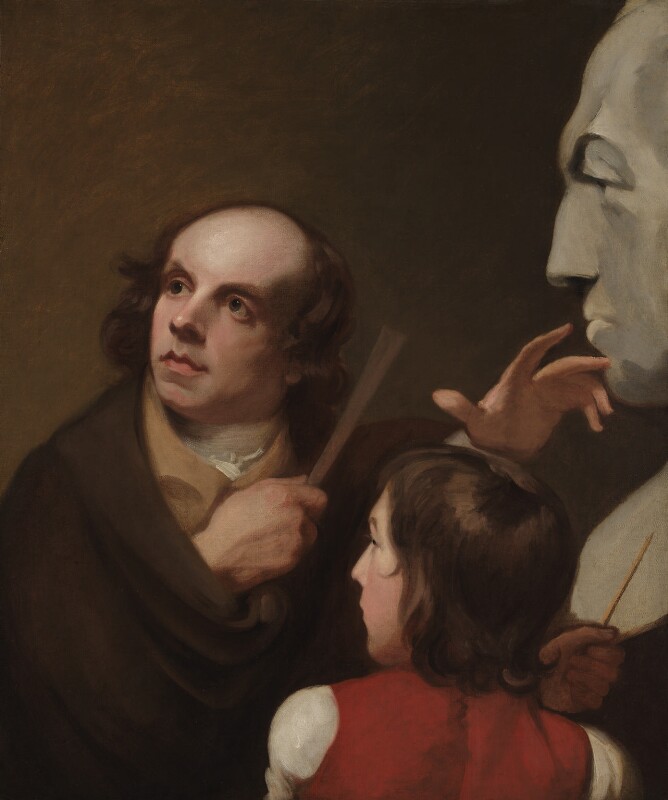 The portrait is a detail of a whole-length group in the Paul Mellon Collection consisting of Flaxman modelling a bust of William Hayley who stands theatrically in the centre, his son Thomas Alphonso leaning against a block of stone and watching the work; the head of Romney himself is lightly sketched in behind Hayley's shoulder. The picture was painted at Eartham in 1795-6 after Flaxman's return from Rome, Romney's Diary recording a sitting on 23 August 1795, 'Mr Flaxman at 11', but the Diary entries end in December. It was bequeathed by Romney to Hayley and thereafter to Thomas Greene, Romney's banker, 'in hope of his preserving it in his family as a memorial of our mutual friendship'. Romney's will is printed in H. Ward & W. Roberts, Romney, II, p 54. The bequest became the subject of an acrimonious correspondence between Hayley and Greene, printed and discussed by Morchand Bishop, 'The Poet and the Attorney' in The Book Collector, 1972, pp 245-54, but the picture remained in the Greene family at Whittington Hall, Kirby Lonsdale, until acquired for the Mellon Collection in 1968. A letter in the NPG archive from Greene's son, Thomas Greene of Bath, confirms its early history.
The NPG detail shows Flaxman's and Thomas Alphonso's head and shoulders only and the bust of Hayley. In spite of Hayley's remark quoted by Ward & Roberts that it was only a copy 'by a judicious artist' it has every appearance of being by the hand of Romney with his usual defects; the two heads are brilliantly effective, the hands less so. Nothing is forthcoming at present about its early history but it was probably given by Romney to Flaxman in memory of his pupil, Thomas Alphonso, who had died in 1800. It was acquired by Crabb Robinson shortly after Flaxman's death in 1826. A letter in the NPG archive recounts the story thereafter.

'I obtained it by the desire of Miss Maria Denman, the younger sister of Mrs Flaxman and with Miss Flaxman the executrix and residuary Legatee of the sculptor she being the survivor of the two residuary legatees devoted herself entirely to the preservation of the remains of the great artist and in that character founded the Flaxman Gallery in the University College. She who recognised this as a genuine work, considered it as a suitable appendage to the Gallery and with the intention of presenting it to the College I procured it; but since that time it has appeared to me that the subsequently established National [Portrait] Gallery has a superior claim' (letter from Crabb Robinson to Scharf 5 June 1860).
A small wood panel of Flaxman's head only is in the Harris Gallery, Preston (494).

Possibly given by Romney to Flaxman; acquired from his heirs, Miss Flaxman and Miss Maria Denman, by Henry Crabb Robinson and given by him to the NPG in 1860.