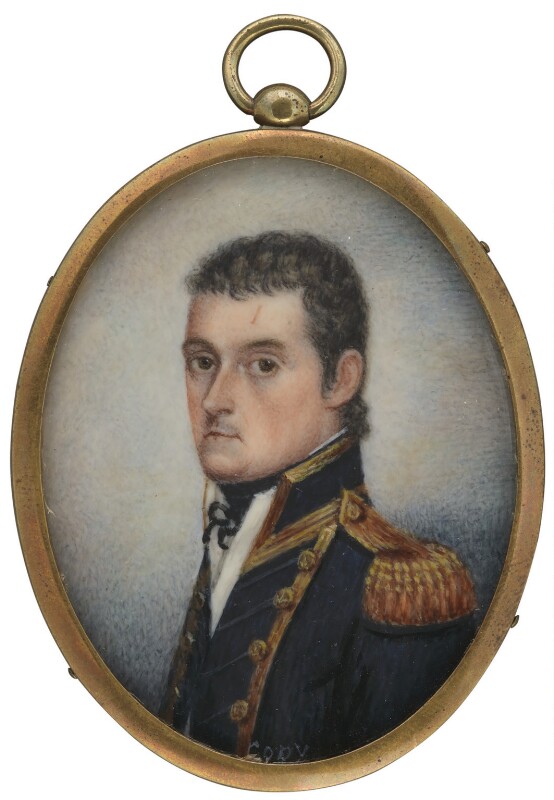 Inscribed in front in white paint: copy and on the back: Painted by Helena G de Courcy Jones.

This is one of two copies by Miss Jones commissioned in 1919 by Professor W. M. Flinders-Petrie who later presented the original to the Mitchell Library, New South Wales, together with a quantity of Flinders' papers relating to the Australian voyage. According to a letter from Professor Flinders-Petrie in the Gallery archive, the original miniature by an unknown artist was painted in 1801. This would have been on his return to England and appointment to command the Xenophon. He could however be wearing post-captain's uniform, to which position he was appointed in 1810. This would accord more with his apparent age of 35 to 40 and moreover would fit with the engraving which appeared in The Naval Chronicle 1814, though the fact that the editor omitted the painter's name suggests that even then it was unknown.
Mrs Flinders disliked it. 'In the portrait', she wrote, 'you will not be able to trace much of your departed friend. The miniature from which it was taken is but an indifferent likeness, and the engraver has not done justice to it. He has given the firmness of the countenance but not the intelligence or animation' (letter to Captain Stewart quoted in Ernest Scott, Life of Captain Matthew Flinders, R.N., 1914, p 402). There is a possibility that the original artist of the miniature may be Richard Westall. Ernestine Hill (Ernestine Hill, My Love Must Wait, 1946, p 215) says 'the commander sat for his miniature to the nineteen year old Westall'. She gives no source for this statement and though Richard Westall is quite a likely candidate no confirmation can be found among the Westall and Flinders manuscripts in the Mitchell Library, Sydney.

(Of the original)
Stipple engraving by an unknown artist published by John Gold for The Naval Chronicle, 30 September 1814.