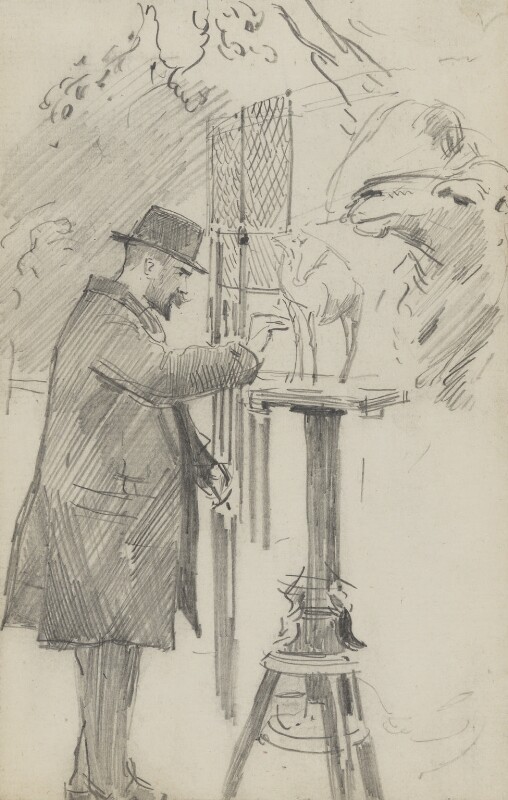 On reverse inscr. in pencil: ‘Onslow Ford modelling camel / for his statue of Gordon. ZOO / 94?’;
and other illegibile pencillings.

Hall’s two sketches record a notable aspect of Ford’s ambitious decision to sculpt a large bronze memorial to General Gordon, the British commander killed at Khartoum in 1888, showing him mounted on a camel. In preparation, Ford made his initial model from a live camel at London Zoo, as he is seen doing here. It is possible that Hall witnessed this event, which would have taken place in 1889; however, it is more likely that he was present at a staged re-enactment shortly before the unveiling of the over life-size statue at Chatham in May 1890, when a photograph of Ford sculpting at the zoo was reproduced in the Graphic (see ‘All known portraits, Photographs, 1890’). The pencilled note ‘94?’ suggests guesswork, possibly by the artist’s heirs.

Ford’s design was regarded as ‘greatly daring’ according to the Graphic, owing to the mount being ‘an excellent but not beautiful quadruped [whose] vast size might have unduly dwarfed its rider by comparison and have rendered the work undignified’. The finished sculpture (cast or maquette exh. RA 1890 (1958)) was, however, ‘a triumph over difficulties’ and indeed ‘a faithful and picturesque representation of the Governor-General of the Soudan’.[1]

See also NPG Portrait Set 'Miscellaneous drawings: The Parnell Commission, Members of the House of Lords and the House of Commons by Sydney Prior Hall, circa 1886-1903'.