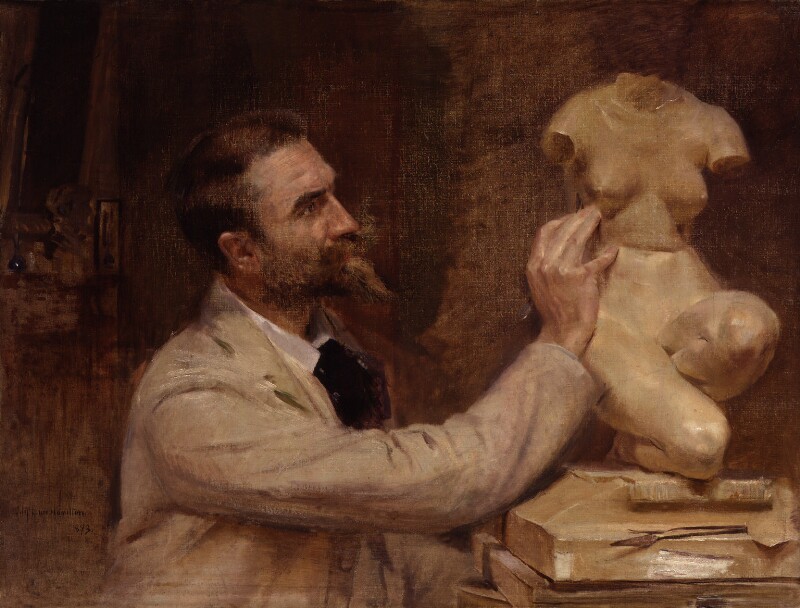 See also NPG 4391, a careful study for or copy of this work.

This is one of four portraits by John McLure Hamilton given by him to the Gallery in 1920; see also Gilbert (NPG 1865), Corbet (NPG 1867) and Monkhouse (NPG 1868). Writing at the time of acquisition, Hamilton recalled that all the sitters ‘were at one time my intimate friends’. [1] For a while the four artists were studio neighbours in The Avenue, Fulham Road and by 1893 both Ford and Hamilton were living in St John’s Wood.

Hamilton recalled a twenty-year friendship with Ford, whom he described as ‘gentle and amiable … born to enjoy much and to suffer much’, adding that despite his dress style, Ford was ‘in no sense a Frenchman, either in blood, in habits or in education’; he was also devoted to both family life and to art, with intense feelings for ‘beauty, love, charity and loyalty’.[2]

Ford, who was at the height of his renown thanks to his ambitious memorial to Percy Bysshe Shelley, [3] is shown in his studio at work on a clay model of a female torso that resembles the finished bronze figure entitled Applause (RA 1893 (1828)). Hamilton’s portrait was no.681 at the same exhibition, and the circle was completed by Ford’s bust of Hamilton (RA 1893 (1785)). Two years earlier, Hamilton had exhibited another portrait of Ford (RSPP 1891 (153)) which may have been the finished study for NPG 1866 (see NPG 4391).

The petroleum oil paint is very thinly applied on what appears a lightly primed support, resulting in a flat, matt appearance with subdued tones blending together. The technique can be compared with that of NPG 1867. Ford is shown against a brownish-red background, with an indistinct view at the left of a fireplace, picture or mirror above and shadowy objects on a shelf, including a small portrait bust. Some pentimenti around the sitter’s back and now-invisible left arm indicate alterations in the pose.

Seeing photographs of the four small works, the artist later exclaimed, ‘How modest they are!’ [4] Citing Hubert von Herkomer’s observation that the portraits had ‘a gray tone and quality that distinguish them from others’, he added his view that ‘the medium that I always use, petroleum, has something to do with this as well as my natural inclination to see things gray’. [5] In addition, the works had ‘never been varnished & should not be unless absolutely necessary’ but would look better under glass ‘as that acts as a sort of varnish’. [6]